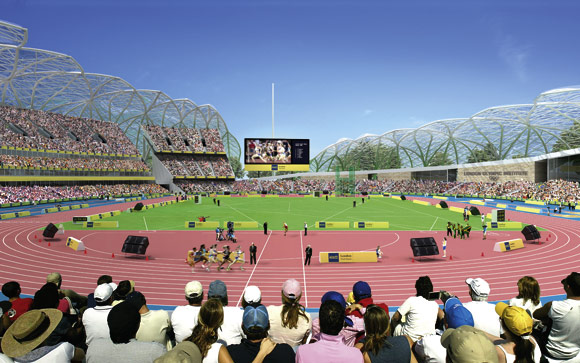 The Olympic stadium in ‘legacy‘ configuration with the upper tiers of seating removed to reduce capacity to 25,000 (Image: London 2012)

London’s successful bid to host the 2012 Olympic Games was anchored in a promise that many of the new sport venues would be flexibly designed to allow relocation or reconfigurement. David Fowler reports on the crucial role which steelwork will play in meeting these sustainable objectives.

Past Olympics have created a legacy of white-elephant stadia, inflexible facilities which see little use afterwards and tarnish the image of the Games themselves. The International Olympic Committee is keen to call a halt to this, and London 2012’s candidate document – the official submission to the IOC – explained how the legacy costs of staging the Games could be cut, while still providing high quality facilities: “We are using existing venues wherever possible and temporary buildings where appropriate. We are only building new venues where clear legacy needs have been identified.”

Four arenas are to be built to enable the Games to be held were identified as being capable of removal afterwards for rebuilding elsewhere in the UK. Many of the permanent venues, including the main 80,000 seat stadium itself, are being designed to be reconfigured with a reduced seating capacity to make them better suited to post-Games needs. 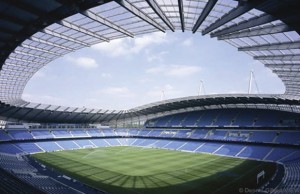 The Manchester City Stadium in its’legacy’ configuration as a football stadium (Photo: Arup)

The origins of this approach can be seen at a number of locations around the world; in the UK it was first adopted for the Commonwealth Games in Manchester, where the organisers only built structures for which a later use had been identified. The City of Manchester athletics stadium was designed to be converted afterwards into a football ground, becoming the new home of Manchester City FC as well as helping to catalyse the regeneration of a former area of heavy industry.

Following on from this approach designers are looking at fully-demountable venues as a practical way of helping countries in the developing world cope with the expense of hosting an Olympic Games. The expense has given rise to anomalies such as the fact that although many Olympic medal winners have been of African origin, the Games have never been held in Africa. Using previously-used stadiums which could be dismantled from a western host nation and re-erected could bring the hope of staging the Games within the reach of many poorer countries.

Thinking like this is behind the decision to produce an alternative, relocatable design for the main 2012 stadium that has been proposed jointly by the project architect and structural engineer of the Manchester stadium. “Steel construction has a number of inherent advantages for this type of approach,” says Mike King of Arup. “It has a good strength to weight ratio and it’s easy to design connections that can be pulled apart and reassembled again, so a structure can be broken down into small parts for transportation.”

Most of the new venues for London 2012 have only been designed in outline and contracts for detailed design will soon be awarded. However the Olympic delivery authorities clearly intend to make many of the venues adaptable or relocatable and designs were developed sufficiently for the purposes of the London 2012 bid to establish their feasibility. 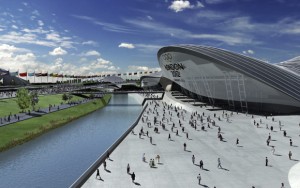 The London 2012 Aquatic Centre will be partitioned to allow competition and leisure use to take place alongside each other after the Olympics (Image: London 2012) 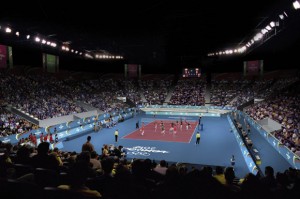 Four arenas will be capable of re-erection elsewhere after the Games, including one hosting Olympic volleyball (Image: London 2012) 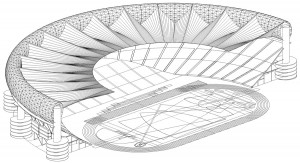 Cutaway axonometric view. The folded fabric roof would be supported by a cable tension ring at its inner edge (Image: BurlandTM) 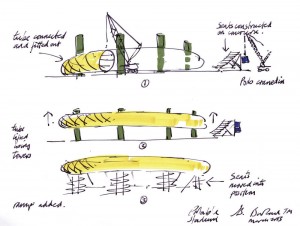 The seating units would be constructed in segments outside the stadium and slid into their final position (Image: BurlandTM) 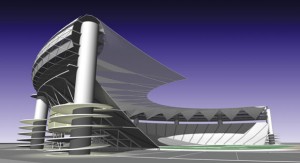 A cutaway rendering of the stadium (Images: BurlandTM) 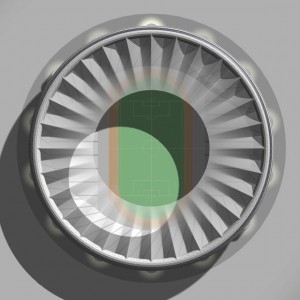 Plan of stadium shows the profile of the fabric roof. The circular form of the stadium allows the seating terraces to be structurally repetitive (Image: BurlandTM)

For example, the Aquatics Centre has been conceived as a steel-framed structure with lightweight geogrid roof, housing a 50m Olympic standard competition pool, a 50m warm-up pool, a 25m diving pool and two water polo pools with capacity to seat 20,000. After the games the water polo pools will be relocated. The building will be partitioned, leaving one Olympic pool to be used for international standard swimming competitions, with seating for 3,500, and the other pool being used as a leisure facility as part of a health and fitness centre.

Four arenas will be built using a modular system designed by a team led by Laing O’Rourke and including structural engineer Robert Bird & Partners (formerly Bird, Marshall & Partners), Taiyo Membrane Corporation, services engineer Crown House Technologies and quantity surveyor Franklin Sports. Two of these will be 12,000 seat arenas, built in the Olympic Park for volleyball and basketball and for the fencing and shooting parts of the Modern Pentathlon. A temporary 6,000 seat arena on Greenwich Peninsula will house rhythmic gymnastics and badminton, and a temporary shooting hall will be built at the Royal Artillery Barracks, Woolwich.

All four of these arenas could be relocated anywhere in the UK and be used in a variety of roles. One of the larger arenas could provide a regional training and competition venue for a range of indoor sports; other possibilities include use as a local authority sports hall, or for large-scale events including pop concerts.

The modular system is based on bolted structural steelwork elements combined with pre-cast concrete plank floor units and seating. Lightweight cladding panels designed for fast assembly and disassembly will be used for external walls. The roofs will be of Teflon-coated glass fibre. Provision for lighting, scoreboards and multimedia would be included. Services, plant rooms and facilities such as toilets and changing areas would be prefabricated. It is estimated that the buildings could be re-erected for 30% less than the cost of building an equivalent venue from scratch in the new location.

The main £450M Olympic stadium designed by HOK Sport and Foreign Office Architects would hold 80,000. In their indicative design the main grandstand would be retained after the Games, but elsewhere the top two tiers of seating could be removed, leaving only the lowest tier and a seating capacity of 25,000.

The roof of the main stadium would be lowered to suit the new size, but leaving enough space to re-fit the second tier of seating and take the capacity back up to 45,000 if needed. It would be possible to re-erect the removed seating as part of another venue elsewhere in Britain.

Involving a steelwork contractor at an early stage delivered significant benefits for an even more radical design which has been proposed by James Burland and Mike King, who were respectively Project Design Director and Structural Engineer on the City of Manchester stadium, which could be completely dismantled and moved after the Games.

Mr Burland, formerly Head of Design at Arup Associates and now head of his own firm BurlandTM, and Mr King, an Associate at Arup, brought in Watson Steel Structures to advise on practical issues. Watson had erected the Manchester stadium roof and before that the Millennium Dome,

Their original idea was for a conventionally-shaped stadium with an oval playing area contained within a structure with a rectangular footprint. “Watson’s advised us that we needed something really repetitive,” says Mr Burland. This led to the idea of a circular structure which provides a constant radius for the seating terraces, giving the necessary repetition.

The seating terraces would be at a fairly steep rake of 42 deg to keep the structure as compact as possible and provide good sightlines. Inset seating for VIPs and media would be provided along the long side of the track in front of the main seating tiers.

A cable net roof would be used as at the Manchester stadium. The main structural element in the design is a huge compression ring around the exterior, supported on large diameter tubular-core structures which also form the basis of spiral entrance ramps. The ring, a diagrid structure made up of universal column sections, would be three storeys deep and could provide 29,000m² of floor space. With its supports, it could be built in advance to house offices for the Olympic organising committee before and during the Games as well as VIP facilities, a media centre and other facilities.

The ring could be pre fabricated — and fitted out — offsite or on the ground and winched or jacked up the columns. For transport to a new location it would be broken down into modular units.

The roof canopy would be a lightweight, translucent fabric folded into a zig-zag shape along the outer edge, but flat at the inner edge. “This would twist the fabric in two directions, keeping it tensioned and giving it stiffness,” says Mr King. The only additional support would be cables along the valleys and ridges, and a circumferential cable around the inside edge forming a tension ring. The folded shape would also facilitate drainage of rainwater to the outer edge.

The seating terrace frame structures would be made from steel sections, each element being around 8m–12m long, assembled in segments independently of the roof, and slid into their final position. “The geometry would be repetitive and as simple as possible,” says Mr King. “We would use steel because its strength to weight ratio is better than anything else commercially viable at present.”

For the seating itself, Burland and King propose using folded aluminium units spanning between the steel members. “Normally you’d use precast concrete, but with anything built in concrete it’s difficult to argue it’s transportable,” says Mr King.

Prefabricated pods for toilets and washrooms would be added outside the stadium, and the whole structure would be ‘dressed’ by a simple additional square structure around it to provide an entrance foyer, ticket barriers and so on. This would not be an integral part of the scheme, though a similar idea with signage and banners to suit could be applied on subsequent uses. The cladding of the compression ring could also be changed as appropriate.

Burland and King’s target cost had been £100M for an 80,000 seater stadium; the eventual design has been costed at £120M, which is still an economic price. Mr Burland pays tribute to the assistance of Watson Steel Structures in developing a practical design, and EC Harris in costing it.

After the Games the vacant site could be given over to mixed used development, using the drainage, roads and other infrastructure put in place for the stadium. “We will put in a bid for 2012 when the stadium goes to tender,” says Mr Burland. “It would be terrific to have something to gift to Africa. The regeneration effect of staging the Olympics there would be incredible.”