Delivering a hotel with a difference 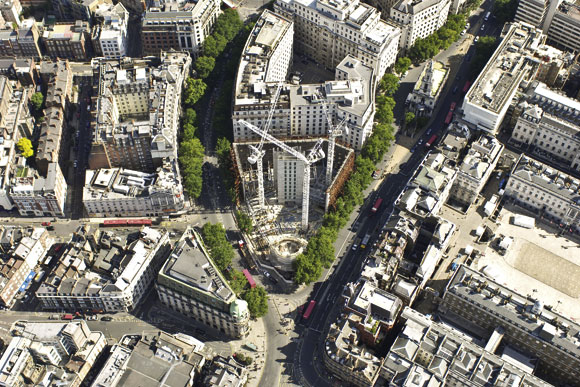 The eastern portion of the project incorporates a retained 1903 facade. 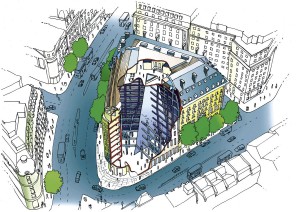 The ten-storey high atrium creates a clear space within the structure.

Situated on the prominent intersection of the Strand and the Aldwych, a new and prestigious five-star hotel is rapidly taking shape in the middle of London. The Silken is the first UK venture for the Spanish Silken Hotel Group, and as well as a 173 bedroom hotel it will include 79 apartments, restaurants, bars and a rooftop terrace.

Work began in May 2005 with the demolition of the ten-storey, 1950s built, Citi Bank building, which occupied the western portion of the site, and the dismantling of the innards of Marconi House, which sat on the eastern side. Replacing these buildings is a new structure which consists of two different, but connected halves: the hotel that is being built on the western frontage facing the Strand, and the residential portion on the site of the former Marconi House.

Construction of the residential sector incorporates the retained 1903 facade of Marconi House which extends over approximately half of the site’s perimeter. The remaining new facade (to the hotel) will be a self-supporting Portland Stone wall supported at ground floor only and restrained horizontally at each level. 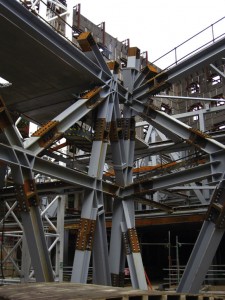 Connections needing hundreds of bolts to form the atrium’s triangular shape were assembled on site.

The entire site’s footprint has three basement levels used for a conference/events area with banqueting facilities, plant rooms, back-of-house facilities and two levels of car parking. The structure also has one main centrally placed concrete formed core, a curved concrete wall to the western tip and a steelwork atrium which all provide structural stability.

Once the project is complete it will be this atrium structure that guests checking into the Silken Hotel will immediately be aware of. The lobby of the hotel will be housed within this triangular stone clad ten- storey high atrium, which creates a clear open space at the heart of the development.

Designed by Foster + Partners, the project is the architect’s first London hotel scheme and has been designed as a bold contemporary vision within a partially retained historic facade with the atrium as a central feature.

“The atrium is a cathedral-like space,” says Julian McFarland, Buro Happold Senior Structural Engineer. “Once finished it will have minimal openings and a very high quality stone finish.”

The cladding will however cover up some complex, and in places, large steel sections which have been designed to form the atrium. The challenging shape starts with a footprint of 25m x 25m x 25m at basement One level and eventually tapers to 5m x 5m x 5m triangle at top floor. “The atrium is without doubt the main architectural feature of the hotel,” adds Mr McFarland. 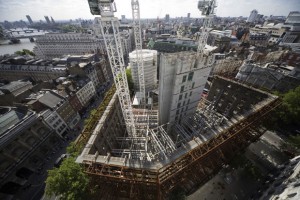 One centrally placed core adds to the structure’s stability.

As the atrium diminishes in size with each floor, this allows the hotel rooms to maintain their depth, despite the presence of a mansard roof at the seventh floor and above. As the rooms must step back to accommodate this external feature – so must the atrium.

Richard McCristal, Project Manager for steelwork contractor Rowen Structures, says: “This part of the project was probably the most time consuming, in terms of design and erection. The connections on the tapered columns are very complex and required hundreds of bolts.”

Each of the atrium’s three walls are inclined. The row of columns closest to the atrium must also be inclined to ensure the attached floor beams do not span more than 5.5m. This in turn ensures the beam depths are kept to a minimum.

The atrium is then constructed from a braced steelwork frame that supports the adjacent floor beams and also forms a key part of the lateral stability system. 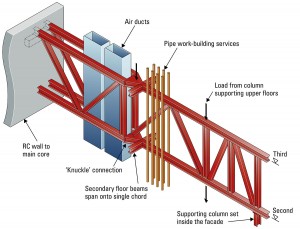 The tuning fork arrangement of the trusses.

The loads for the entire atrium structure are then concentrated at the three corners to allow large openings at ground and basement One level. Two of these columns straighten between the basement Three and basement One level, to maximise car parking space. At the crank there is anchoring into the lowest concrete slab.

“There are some huge loads being transferred into these three corner columns,” says Mr McFarland. “Approximately 100t at each point.”

To form an opening through the atrium at basement One level there is a series of 24m-long beams flush with the top of the concrete slab. Each of these steel members weighs in at 16t.

The primary beams are positioned within the depth of the floor slabs, with only the bottom flange down-standing. 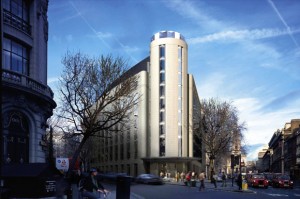 The hotel occupies a prestigious plot at the eastern end of the Strand.

“Steelwork is being used as it provides the quickest and lightest structural solution,” explains Mr McFarland. “A slimflor decking system was adopted with doubled up beams each side of the supporting columns. This had a dual purpose, firstly it allowed a steelwork equivalent to a flat slab and secondly this beam configuration allowed a riser to run in the gap which was key to the overall building services strategy.”

As with most hotel projects a reduced column spacing at ground floor level was required for function areas and circulation. However, the floors above containing rooms require a frequent column grid to limit the structural depth and to maximise the ceiling heights. The conundrum was solved by installing a series of storey high transfer truss structures within partition lines between the first and third floors. The concept is that all vertical load is either transferred to the perimeter of the building or to the centre. 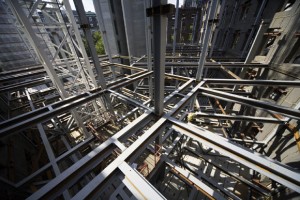 The grid pattern of the residential block.

“We had the same problem on the residential part of the structure,” says Mr McCristal. “The ground floor needed to be relatively column free as it contains the ramp for the basement car park and a restaurant, while the apartment levels above needed more columns on a constant grid pattern.”

A total of 23 trusses have been installed, 17 of which are all different in size and shape. Some of the trusses in the residential side of the building had

a ‘tuning fork’ arrangement (open ended at one end) to allow the transfer structure to work around the fixed riser positions.

Separating the hotel and residential sections of the structure are two large two-storey high transfer trusses. Again these structures allow for fewer columns on the ground floor and form the boundary between building’s different parts. Unlike the other trusses, these larger sections were brought to site in two pieces and then bolted together.

“The whole steelwork project has been a challenge and required a lot of coordination between all of the team members,” explains Mr McCristal. To summarise the majority of Rowen’s steel erection programme, he adds: “Up to the fourth floor the steelwork is complex, from there up to the seventh it’s mostly repetition and then from there up to roof level it’s complex again.”

As of this month (November) all of the trusses have been installed and steelwork has reached the fifth level. Rowen is scheduled to complete the steel erection in the first quarter of 2008.