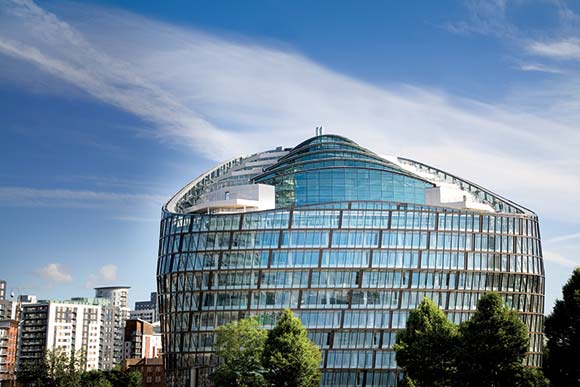 The building forms the initial stage of a much larger development

Steel paid outstanding sustainability dividends for the Co-operative Group when it developed a new headquarters in Manchester. In the latest of our Project Revisited series Nick Barrett praises One Angel Square which has become the first office building to earn BREAAM’s highest rating.

Maximising internal flexibility and future-proofing against climate change were some of the key requirements for the Co-op when it planned to provide 3,500 staff with a high quality base in a new HQ building in Manchester. A steel framed solution always looked like it would pay dividends on those scores, and others, but steel’s sustainability credentials also became a major attraction when the Co-op decided that it wanted the £100 million building on a landmark site to also be a sustainability landmark.

One Angel Square, as the 16 storey building providing 30,000m² of open plan offices is now called, is said by the Co-op to be the single biggest embodiment of its brand. The Co-op’s success in achieving its hopes for the building is being hailed as a beacon to others with ambitions to express core brand principles like commitment to sustainability in the architecture that they commission.

The success of the Co-op and its entire project team – which included main contractor BAM Construction, Buro Happold, 3DReid and steelwork contractor Fisher Engineering – was recognised with the BREAAM Outstanding award, the first granted to a UK office building. One Angel Square’s score of 95.3% is the highest BREAAM Outstanding rating achieved to date; it also has an A+Energy Performance Certificate and a Display Energy Certificate A for operational standards, making it the first office building in the UK to achieve all three key environmental standards.

The design team set out from the start to create a building that would merit these accolades, but eschewing the sort of ‘bling’ that sometimes pays lip service to sustainability, incorporating a range of energy efficiency measures into the design.  A combined heat power energy system for example is powered by rapeseed oil grown on the Co-op’s own land, a possibly unique component of the carbon reducing measures employed. The building façade is double skinned and three giant geothermal earth tubes bring cooling fresh air into the building.

As Paul Richardson, Buro Happold Project Engineer, said when NSC previously visited the site (NCS October 2011): “It’s very much a bespoke design chosen to achieve the highest BREEAM rating, with the large atrium allowing natural daylight to penetrate the floorplates and an exposed soffit maximising the thermal mass.” Steel was the natural choice for the framing material, Mr Richardson said, as it gives the required large column free floor spaces and the option for future flexibility within the building.

Thermal mass was a key consideration so the design has an exposed soffit and passive chilled beams. Although the standard composite floored steel framed buildings provide all the thermal mass properties required in a modern building, the issue for designers is increasingly how to cool buildings down. Forecasts of temperature rises of between 3% and 5% in summer and reductions of 30% during winter by 2050 were taken into account in the building’s design and it has been ‘future-proofed’ against these changes.

Externally the building certainly provides an imposing landmark. It is a glazed three sided structure, each corner having a core, two of which rise to the ninth floor and the third rising all the way to the 16th floor. The upper levels are terraced from floors nine to 16. A rectangular atrium rises from ground floor level to the sloping roof, providing a hollow centre. 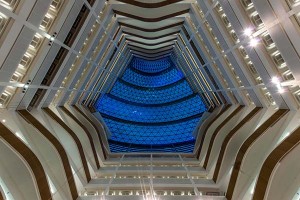 The atrium, looking up towards the glazed roof.

Internally the building impresses from the outset, with the atrium soaring from ground floor to the full height of the building, allowing full advantage to be taken of natural daylight and helping air move up through the building.  Light comes in from the glass roof and spills over the balconies that surround the atrium space. The office spaces themselves take advantage of 16.5 metre span steel sections, achieving the client’s wish for maximising flexibility should its own requirements change or should a future occupier have different needs. All desks are said to be within seven metres of a window and the glazed exterior gives views from desks across the city.

Steel construction made the large column free open plan office spaces possible, allowing the Co-operative to have an interior with an informal and communal feel, echoing the organisation’s original mutual society brand values.

Summing up the construction team’s achievement, 3DReid Project Architect Mike Hitchmough says: “The building sets a new benchmark for commercial office design, achieving a balance of sustainability, operational efficiency, space flexibility and high quality. The project succeeds in translating the client’s ethical approach to society and the environment in their business through their commitment to deliver a truly outstanding building.”

Last word to the satisfied client – the Co-op’s Chief Executive Peter Marks says in the group’s sustainability report that the new HQ is more than a building; “It is a demonstration of confidence and deep rooted commitment to a sustainable future.” 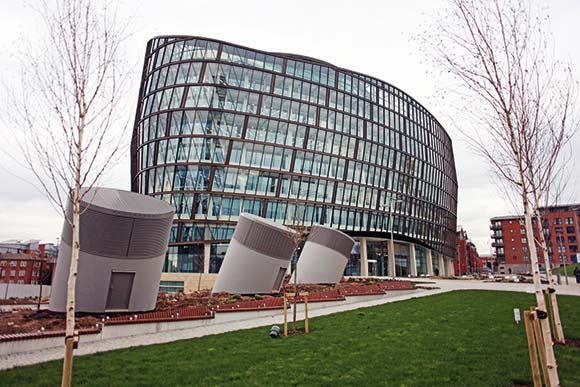 A range of energy efficient features has been incorporated into the design, ensuring that the building can deal with the existing temperature ranges and forecast rising temperatures.

The three earth tubes can draw some 50,000 litres of air into the building every second. A stack system distributes this air through displacement vents, taking advantage of the thermal mass of the concrete. The atrium also plays a role in keeping the office environment pleasant by allowing rising warm air to be extracted.

The double skin façade also insulates the building in the winter and provides solar shading in the summer. There is a gap between the single-glazed outer skin and the inner skin that is open at the bottom and with louvres at the top allowing warm air to be trapped in winter and free flowing cool air in the summer to pass through the space.

Solar coating on the glass and anodised bronze mullions on the inner face of the outer skin that act as blinds, and are placed in relation to the orientation of the building to the sun, also help keep the sun’s heat at bay.

There is relatively little sunlight in Manchester most of the time so the building faces south to maximise heat recovery through a system located in the atrium.

Other energy efficiency measures include low energy LED lighting in the atrium and a cogeneration CHP biofuel boiler that runs on rapeseed grown on Co-op owned farmlands. Absorption chillers and chilled beams are powered by surplus heat from the boiler, providing cost-effective cooling.

Thermal mass is the ability of a building’s internal fabric to absorb excess heat, store it and either expel it or use it at a later time. 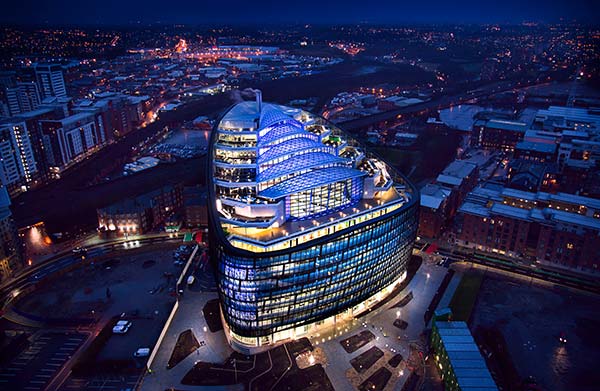