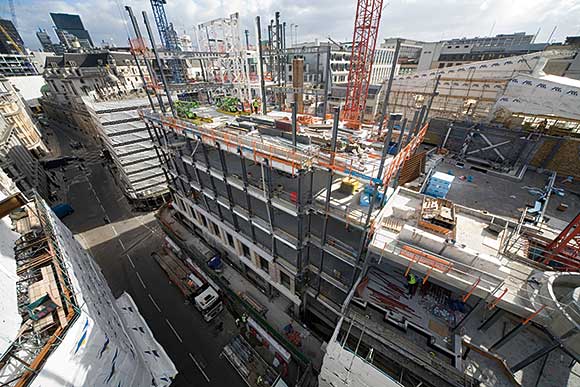 To incorporate an irregular shaped footprint grid patterns change on most floors.

A number of potential headaches have been solved on a new commercial development in central London which has had to incorporate all service portals within an irregular project shape and around two listed and retained sections of previous buildings.

The new eight-storey high office development at 60 Gresham Street in the City of London has presented the construction team with more than just the usual challenges associated with a confined inner city project.

Located on a site which is roughly rectangular in shape, the building is bounded by roads on three elevations. A slight complication is the fact that none of these streets, including Gresham Street, are straight. So in order to maximise the available space, the new building’s shape, which is dictated by these thoroughfares, is irregular.

The site was originally occupied by a collection of buildings, some dating back to the mid -19th Century. Once these structures had been demolished two important retained features – a police station’s facade and its internal wooden staircase, and a pub entrance – remained and these had to be incorporated into the new structure’s design. 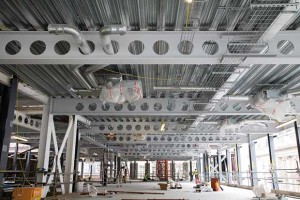 Cellular beams with bespoke 750mm service holes have been used throughout.

When complete the building will provide approx- imately 5,444m2 of Grade A specification office and retail accommodation in the heart of the City and only a stone’s throw from St Paul’s Cathedral.

“Many of the challenges are typical with central London projects,” comments Chris Jarman, Project Manager for Costain’s project engineer SKM Anthony Hunt. “All three of the project’s street facades are slightly skewed because of road alignment, and as we reach fifth floor level the structure has to step-in at every floor so it doesn’t interfere with adjacent building’s views.”

Then there are the retained features; the facade of a nineteenth century police station which goes up to fourth floor level, the constabulary’s listed wooden staircase and, along Gresham Street, an old brickwork entrance to an ancient hostelry.

All of these elements have been incorporated into the new structure and in the case of the staircase, the new steel frame goes up alongside and over it, with no connections. “The staircase wouldn’t have been able to take the loads, so it remains structurally independent,” explains Mr Jarman.

Erecting the new steelwork around these retained features, coupled with the site’s irregular shape, means the structure has been constructed with a variety of grid patterns and spans, with the longest at approximately 15m.

“There are no straight lines within this project, except the lift shafts,” says Jose Aira-Rodriguez, Project Manager for Bourne Steel which is undertaking all steel fabrication and erection on behalf of Costain. “The facades are all skewed and to incorporate the retained features we have a real mixture of elements.”

The project design had to maximise all available space and this included the floor to ceiling heights as well as keeping all the services within the supporting floor beams.

Cellular beams are ideal for this kind of project as they are fabricated and supplied to site with service holes already within their depth, making floor construction quicker and more economical. 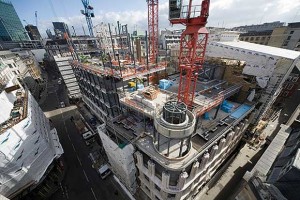 Fabsec cellular beams are used throughout the project and were stipulated by structural engineer SKM Anthony Hunt because of the services alignment and the number of beams and columns which then have to sit on top of these steel sections.

“The Fabsecs are all bespoke for this project and many have specially elongated 750mm service holes to accept the unique service bundles,” explains Mr Jarman. “The Fabsec beams are also supporting other steelwork in some places, and in these areas the beams have no holes so they keep their structural integrity. ”

Approximately 200t of beams have been supplied to the project all of which are 550mm deep and supplied in lengths up to 15m, with the shortest member being 3m long.

“By using these beams we’ve been able to maximise the available space by keeping services within the floor depths and retaining the required floor to ceiling heights, as set by the planners,” adds Mr Jarman. “Based on the information we had, we chose to use Fabsec beams as they best suited this complicated and irregular shaped structure.”

Steelwork starts at ground floor level and erection has followed a regimented programme, whereby two floors are constructed at a time and then fully decked while the next two levels are being undertaken.

“As well as incorporating the retained features into the new steelwork we are also marrying into an existing building along the south elevation up to fifth floor level,” adds Mr Rodriguez.

Once the new build reaches fifth floor the structure’s steps kick-in and floor space generally decreases from just over 800m2 on the fourth floor to 380m2. The subsequent floors then decrease gradually until the top (eighth) floor which has 143m2 floor space.

Because of the building’s irregular shape each floor has also incorporated at least two grid patterns, one off-set to the other by about 45°. “This was again necessary to take into account the structure’s shape,” explains Mr Rodriguez.

60 Gresham Street is scheduled for completion by this summer.