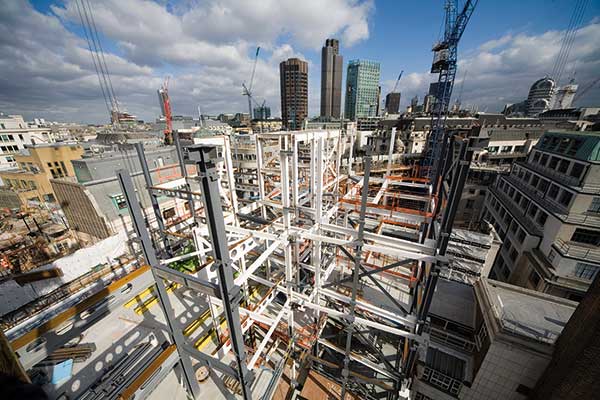 A new eight-storey office development at 60 Gresham Street in the City of London has overcome a number of challenges with steel construction.

Situated on a site which is roughly rectangular, the building is bounded by roads on three elevations, none of which are straight. The structure’s irregular shape also has to incorporate two historic retained features – an old police station’s facade and an ancient pub entrance.

“Many of the challenges are typical with central London projects,” said Chris Jarman, Project Manager for SKM Anthony Hunt. “Using steel means we have a variety of grid patterns and spans, with the longest at approximately 15m.”

Maximising the available space also included the floor to ceiling heights and keeping all the services within the supporting floor beams.

Fabsec cellular beams have been used throughout the project and were stipulated because of the services alignment and the number of beams and columns which have to sit on top of these steel sections.

Steelwork contractor Bourne Steel has supplied and erected 500t of structural steelwork on the project and the job is scheduled for completion this summer.