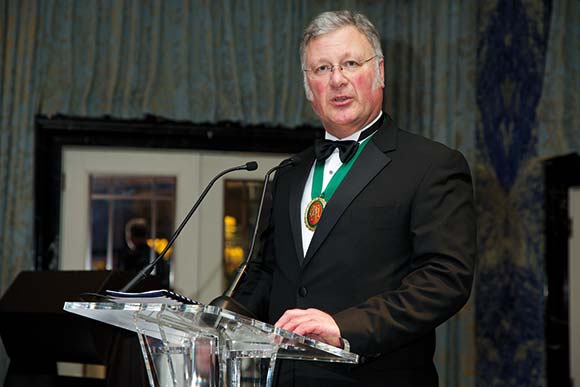 BCSA President Ivor Roberts criticised the award of the Forth Replacement Crossing steelwork contract to a Chinese company as a blow that must not be allowed to happen again. Speaking at the BCSA’s National Dinner Mr Roberts said the award to an overseas company was completely unnecessary, causing taxpayer’s money to flow out of the country.

BCSA Members have secured the steelwork contracts for the north and south approaches to the bridge, but he said this was too little and too late. Mr Roberts said the Forth Replacement Crossing contract award was one of the spurs for the recent launch of the BCSA’s Rebuilding Britain Campaign, which calls for the Government to ensure that local supply chains are put first for the good of the economy and the industry. 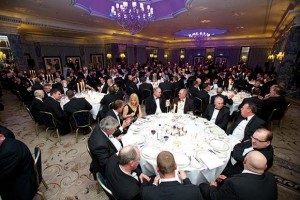 Guest tables at the National Dinner

UK companies were not competing on level playing fields when they faced the higher costs of quality assured production and health and safety and other regulations that overseas competitors did not bear.

The campaign calls for the economic benefits of using UK and Ireland-based companies to be written into procurement guidelines and for the benefits of using UK and Ireland constructional steelwork contractors to be recognised in procurement processes. Constructional steelwork on all government funded, endorsed or private finance infrastructure projects should be procured using a BCSA quality assurance scheme member.

News that the Government is supporting Chinese investment in UK infrastructure and construction poses an enormous risk to the whole construction supply chain, he said, adding:’ This is one battle that I believe we can win – but only by working together to engage in a concerted and long term campaign.’

Mr Roberts urged Members not to engage in pricing below what is needed to earn a sustainable profit. He said: “As steelwork contractors we have to price our business to actually make a profit as well as insisting on fair and reasonable contractual terms, or we will run the whole industry into the ground. And as a steelwork contractor I know that it’s possible to just say no to suicide pricing and unfair contracts, and continue to run a successful business.”

Among the highlights of the year were the hard work by the BCSA’s committees that supported the introduction of Project Bank Accounts on government funded contracts, work towards the introduction of CE Marking for construction products later this year and for fabricated structural steelwork in 2014. As part of the Joint Market Development Board partnership,Tata Steel and the BCSA have worked with the Steel Construction Institute to deliver an important new website – www.steelconstruction.info – that provides a new first stop for all steel construction related advice.

Members had continued to drive down accident rates with the help of the Health and Safety Committee.

Guest speaker Sir Edward Lister, Chief of Staff and Deputy Mayor for Planning for the Greater London Authority, said he was very optimistic for the future of London – the greatest City on earth, he claimed – and for the steel construction sector’s role in continuing to help develop it. 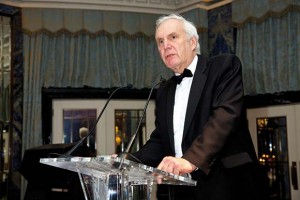 Employment is rising in London, by a forecast 6.2%, and the booming insurance sector was only one of a number that demanded the large open spaces that steel framed buildings provide.

Cranes were rising in Docklands as development continues there he said, and City of London developments under way and planned ‘radiated confidence’ in the future.

London is growing faster than New York or anywhere in Europe. Population growth of 13 million by 2031 would need to be catered for with future developments, including places for these people to work and relax as well as live.

This meant a lot of development had to be successfully undertaken. ‘We have the powers to ensure that it happens and we will do it,’ he promised.