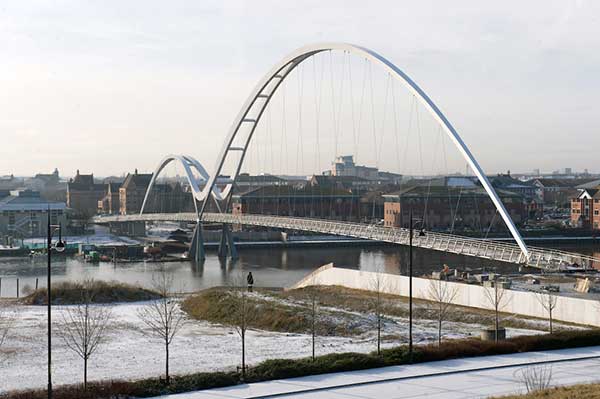 The Infinity Footbridge which spans the River Tees at Stockton scooped the Supreme Award for Structural Engineering Excellence, as well as winning the Award for Pedestrian Bridges at the 42nd Structural Awards 2009 held at London’s Natural History Museum.

More than 300t of structural steel was used on the Infinity bridge which is formed by two symmetrical arches spanning 180m. At its highest point the bridge stands 40m above the river.

The judges said the Infinity bridge was a bold and daring design which demonstrates what can be done with artistic flair, technical excellence, complex analysis and excellent engineering teamwork.

Main contractor for the project was Balfour Beatty Civil Engineering, while steelwork contractor was Cleveland Bridge.

One other notable category was won by a steel project as Cabot Circus Roof Structures was the winner of the Commercial or Retail Structures Award. Steelwork contractor on this job was SH Structures.