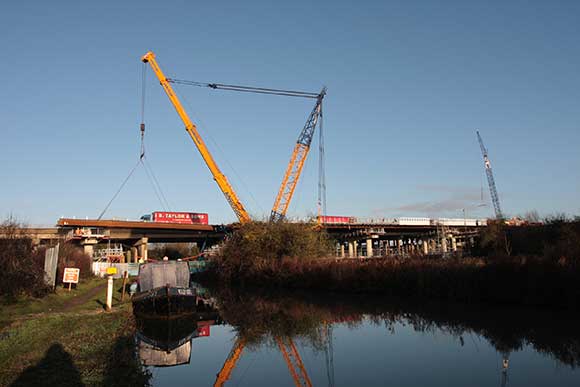 To keep vehicles flowing on the A34 near Oxford a temporary bridge will carry traffic while an existing viaduct is demolished and then rebuilt. The deck of this temporary structure will later be incorporated, after a sliding operation, into the new viaduct.

The Wolvercote Viaduct in Oxfordshire is a vitally important transportation structure as it not only carries the A34 dual carriageway over the River Thames flood plain, but also spans the Oxford to Birmingham main line railway, the Oxford Canal as well as the A40 Oxford to Cheltenham road.

Built in the early 1960s this strategic double bridge viaduct has suffered extensive deterioration due to the ravages of time and requires significant and regular maintenance to ensure it remains safe.

Replacing a concrete viaduct with a new weathering steel composite structure while ensuring minimal disruption to the travelling public has presented the construction and project design team with a number of challenges.

One of the main objectives of the scheme is to replace the existing 250m-long viaduct while maintaining the current peak time traffic flows. To achieve this a dual lane offline temporary viaduct, capable of taking the A34 southbound traffic, is being constructed adjacent to the existing southbound bridge.

This in turn will allow the project team to demolish the existing southbound viaduct and construct a new replacement structure in its place. This work will essentially involve piling and then the installation of new concrete piers.

“In order to reduce the project duration we will then slide the 250m long x 11m wide offline viaduct deck in to the original southbound viaduct alignment,” explains Darren Dobson, Costain’s Project Manager. “This jacking and sliding procedure will take place in one night time shift in order to limit the disruption to road users.” 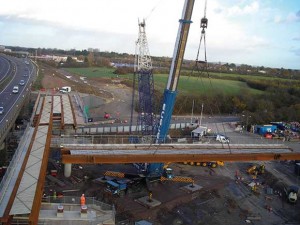 The temporary southbound viaduct was begun in the Summer of 2008, with piling work and piers cast prior to steelwork erection beginning. The steel deck was then completed in an eleven week programme beginning in October.

“Although the southbound bridge is temporary it still resembles a permanent structure and was erected as such,” explains Simon Reavell, Project Manager for steelwork contractor Fairfield Mabey. “We have supplied interface plates which are placed below the deck bearings, and they will aid the sliding process.”

The 250m long temporary bridge has seven spans, three fewer than the existing viaduct, and was erected one span at a time. The length of each of these spans vary, but they are all approximately 35m long. Fairfield Mabey brought the necessary steel girders to site and assembled them into pairs on the ground before lifting them into place. Each span is made up of four main girders, which means two pairs and two lifts per span.

The temporary southbound bridge is now nearing completion. Once complete, traffic will be switched on to the new structure allowing demolition to start on the existing northbound bridge.

“The new northbound bridge is a similar structure to the southbound bridge,” explains Mr Reavell. “At 250m long and seven spans it will be erected in the same way as the temporary off-line bridge.”

Once demolition has been completed, Costain will begin piling and then construct the bridge piers. Steelwork for the second bridge is scheduled to begin in July.

Meanwhile, the southbound temporary bridge deck is scheduled to be moved onto its new piers and abutments sometime in the Summer of 2010.

“Moving a 250m long deck, weighing in excess of 5,000t, will be challenging manouevre,” says Mr Dobson “But we anticipate moving the deck in one six hour overnight phase.”

Once the deck has been slide to its new position, the temporary bridge piers will be demolished leaving no trace of it ever being there.