The UK’s most famous ancient monument is being transformed by new and improved visitor facilities, with steelwork taking centre stage at the World Heritage site.

Construction work at Stonehenge is progressing apace and by the end of the year a new visitor centre and exhibition gallery will open to the public.

Located at Airman’s Corner, 1.5 miles to the west of the current facilities and out of view of the world famous Stones, the new buildings have been sensitively designed to have minimal impact on the World Heritage site.

Loraine Knowles, Stonehenge Director at English Heritage says: “The construction of the visitor building is just one aspect in transforming what is widely agreed to be an unsatisfactory tourist and cultural experience.” 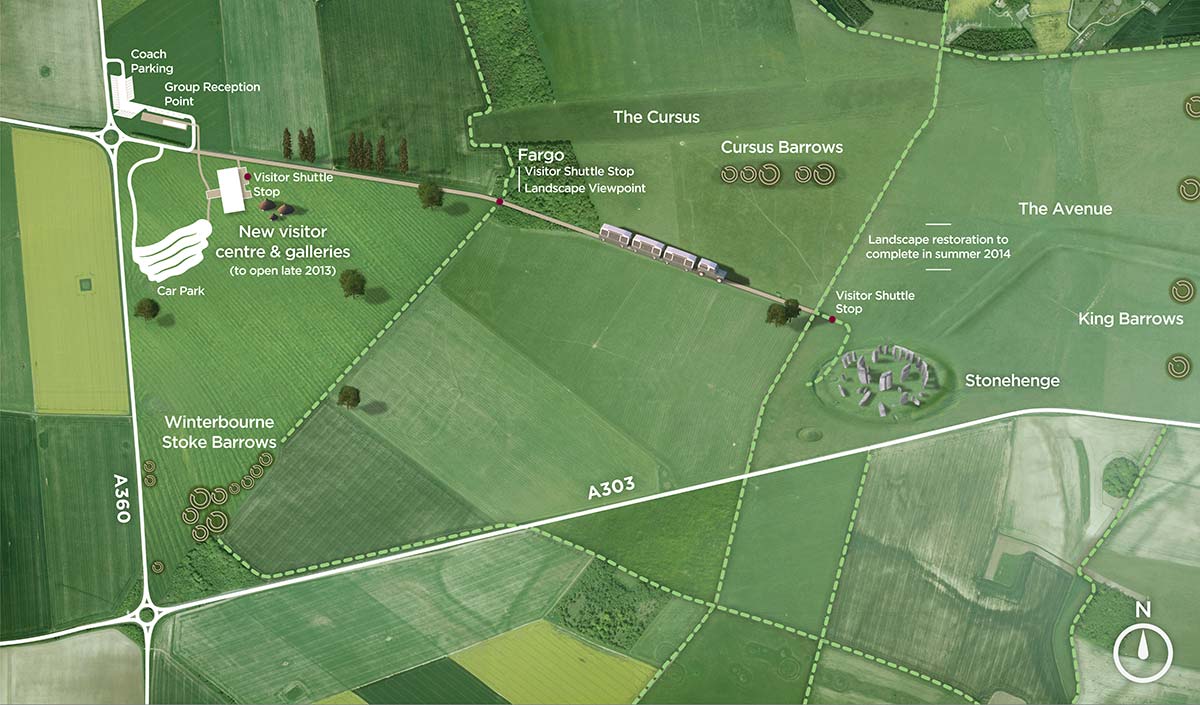 By moving facilities away from the Stones the visitor experience will be improved, as the setting will be more tranquil and dignified. At the same time general views of the site will be enhanced as a section of the nearby A344 road will be closed to traffic and grassed over; traffic being diverted away from the Stones via a new roundabout at Airman’s Corner.

The overall scheme comprises the visitor centre structures, an ancillary building for staff and back of house operations, a coach park, a car park and the embarkation point for the visitor shuttle to the Stones.

Designed by architectural firm Denton Corker Marshall, the visitor centre will accommodate galleries, a café, a shop, education space and toilets all housed in a pair of single-storey pods sitting beneath a feature undulating canopy roof.
The centre’s design is said to be a considered response to a brief that called for a functional and high quality structure which is universally accessible, environmentally sensitive, and at the same time appears light and unimposing.

“The centre needed to be light and built on raft foundations so as not to disturb the historic site, a steel frame was the best solution for this brief,” says Angela Dapper, Denton Corker Marshall Project Architect.

“Another consideration was to reduce the mass of the footprint, so we have two pods separated by outdoor circulation areas.” 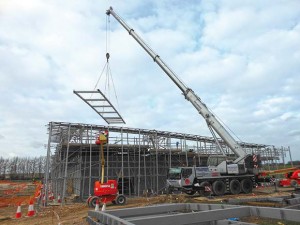 Ladder sections for the roof are lifted into place

The two 35m × 35m pods have been formed with a steel frame of beams and columns. One of these structures, housing the café and shop, is fully glazed, while the other is clad with SIPS (structural insulated panels).

The glazed north pod gains its structural stability from discreetly positioned cross bracing. No bracing is required in the south pod as the SIPS panels provide the lateral stability, acting as stressed skin diaphragms to transfer lateral loads at roof level to the foundation.

As the south pod will accommodate the centre’s exhibition space, a large open column free zone was required; the steel frame has provided this structure with a 17.5m span in places.

The columns are spaced around a predominantly 7.5m × 5.5m grid, but as Ian Mitchell, S H Structures Design Manager says: “The pattern does look a bit random, but they are in fact set out and tilt to meet the canopy at the point where the soffit tiles meet.”

Approximately 100 of these columns are shorter than the others as they are located on the pods’ roofs.

“These shorter columns provide the canopy with its stability,” says Clare Statton, SKM Project Structural Engineer. “They act as inverted cantilevers, which is achieved by fully welded moment resisting connections to the canopy grillage and pinned connections to the pod roof beams. The perimeter columns, which spring from the foundation, provide minimal contribution to the sway stiffness.” 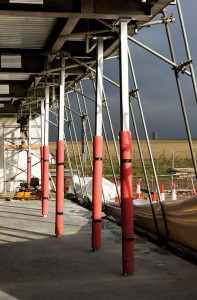 Erecting the canopy roof has been the most challenging aspect of the steel programme. Because of its size and the fact that it is self supporting (once complete) a large amount of temporary works have been needed.

Scaffolding had been installed to temporarily support the canopy during erection. Once the entire roof and all of the columns were installed the scaffold system was dismantled.

The procedure for erecting the roof involved installing one complete grid line of raking columns, propping each one individually and then lifting the roof members into place.

Steelwork for the canopy roof arrived on site in ‘ladder’ sections formed from RHS boxes, each one measuring 17.5m long. The curved ladder sections were positioned in place on temporary supports which were adjusted to achieve the correct theoretically prescribed shape. Once this shape was achieved, the splices in the ladder trusses were welded together to create the canopy’s undulating form. Infilling between ladder sections was completed by welding small secondary steel pieces into place.

The steel canopy will have a perforated zinc soffit which will admit changing patterns of sun and shade according to the time of year, the idea being to let in more warmth in the winter and more shade in the summer.
The new visitor centre will open at the end of the year. Once up and running the old facilities will be removed and the restoration of the landscape near the Stones will commence, work which will be completed by the summer of 2014.

The visitor centre will have a low carbon footprint and a high BREEAM rating for its sustainable design and construction. It has been built with sensitivity in mind and sits lightly in the landscape. Reversibility – the ability to return the site to its current state – was a fundamental design concept and one in which steel has played an important role. The building will last as long as it needs to but could, if necessary, be dismantled leaving little permanent impact on the historic landscape.

A number of features will be installed to maximise energy efficiency, minimise carbon emissions and pollution, and reduce water consumption. For instance, an open loop ground source heating system will pump water from underground through a heat pump unit which extracts heat energy from it before it is put back into the ground. This will enable the building to be heated and provides some cooling without the need for fossil fuels.