Posted on April 13, 2018 by NSC in Projects and Features, This month's featured stories 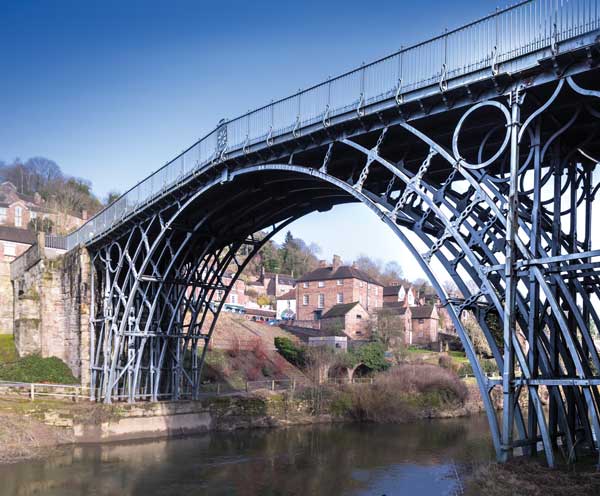 FACT FILE
Iron Bridge conservation
Main client:English Heritage
Main contractor: Taziker IndustrialSpanning the River Severn in Shropshire, Iron Bridge has become an iconic and universally recognised symbol of the industrial revolution. Opened in 1781, it pioneered the path to using cast iron on a large scale and consequently the construction industry was never the same again.

Having stood for more than 230 years, the UK’s best-known industrial monument is today suffering in its old age. In fact, there are numerous cracks in the structure, due to stresses in the ironwork dating from the original construction, ground movement over the centuries, and an earthquake that struck in the late 19th Century. 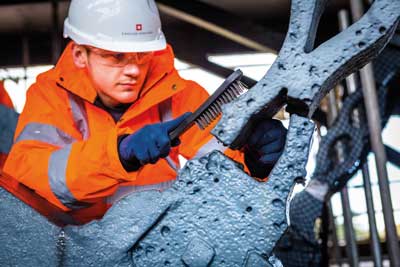 Numerous cracks in the ironwork are being repaired 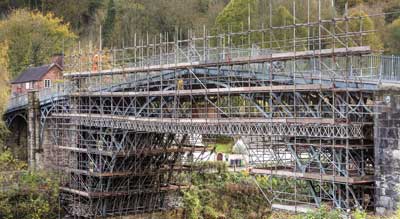 A public walkway, allowing people to see the works in progress, is being incorporated into the scaffold 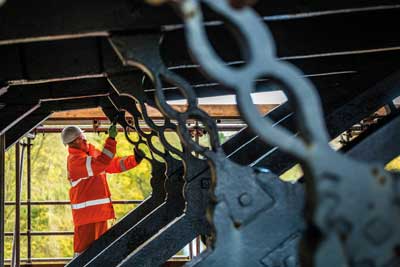 Rust removal continues prior to the ironwork repairs 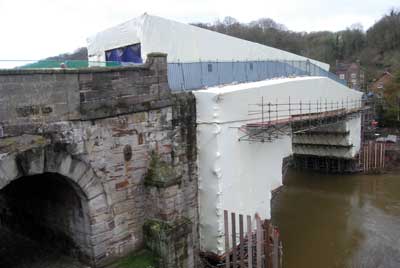 To remedy these ailments and preserve the bridge for future generations, English Heritage, with the aid of steelwork contractor: Taziker Industrial, has embarked on a conservation programme. This work will see the different elements of the bridge – the iron radials and braces holding the structure together, the deck plates and wedges, the main iron arch, and the stone abutments on either side of the Severn – examined and repaired.

Taziker Industrial Project Manager Duncan Warburton explains: “This is a conservation job and not a refurbishment, and so as much of the original materials have to be retained in an unaltered condition. All of our work must not remove, alter or permanently bond, cross or link to any original part.

“Consequently, all of the work must be reversible and removable without affecting the condition of the original material now or in the future.”

Unusually for a steelwork contractor, Taziker is not only working with the original cast iron elements, all new metal added to the bridge must also be iron. The company is employing a specialist ironwork firm to fabricate and supply new material for this project.

All of the new ironwork is bespoke and each new piece is different and unique. Many parts of the main arch structure have cracks, these are being repaired by adding a new iron brace that is bolted to the existing iron, and then wraps around it to keep it in place. In this way, no original iron member is removed even if it is cracked.

Other repairs are being done to the bridge’s deck as ongoing corrosion of the packing pieces between the plates and supporting beams is causing the deck to slowly lift. New iron packing pieces are being fabricated and will be installed, while broken deck plates will be strengthened with new ironwork.

In order to carry out this work, Taziker had to erect an access scaffold to the bridge. This has a fixed sheeted roof and sides, shrouding most of the structure from view.

Within this encapsulated space, the initial works began with the entire ironwork being cleaned and the rust build-up removed by pressure grit blasting.

English Heritage made a commitment to maintain public access between the communities on either side of the bridge throughout the works, so Taziker has divided the bridge deck in half, working on the downstream half first and allowing pedestrians to use the upstream half. Once the first half of the deck is complete, the procedure will be reversed.

On the underside of the bridge, the main works continue unhindered by the need to give public access. However, a public walkway is being erected on the upstream side of the scaffold and this will allow guided tours during the summer to see the work in progress.

Over the years there have been numerous repairs done to the bridge, most notably in the early 20th Century, and all of this work is being kept in place.

“The old repairs are now historic and integral to the bridge,” says Mr Warburton. “We are repairing and conserving the old repair work in much the same way as the original bridge structure.”

According to English Heritage, once the repair work has been completed Taziker will repaint the entire bridge. Detailed historic paint analysis is being undertaken in order to ensure the most suitable colour is chosen.

The conservation work on Iron Bridge is due to be complete by the end of the year. 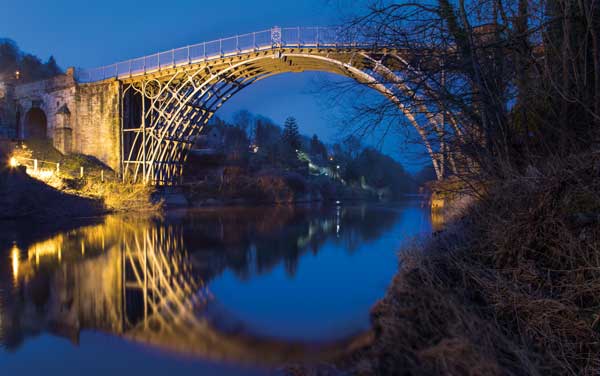 The bridge that started a revolution

Iron Bridge sits in what is today a rural area, but in the late 18th century this part of Shropshire was an industrial powerhouse because of its rich coal deposits.

In 1709, Abraham Darby I, a former brass founder from Bristol, had begun to smelt local iron ore with coke made from Coalbrookdale coal.

The expansion of industrial activity here in the upper Severn gorge, however, was handicapped without a bridge, the nearest being at Buildwas 3km away. Intense barge traffic along the river also required a single-span bridge, as the steep sides of the gorge ruled out rising approaches to a stone central arch.

It was the Shrewsbury architect Thomas Pritchard who first suggested in 1773 to the ironmaster John Wilkinson that an iron bridge be built over the Severn. The chosen crossing point, where a ferry had crossed from Benthall to Madeley Wood, had the advantage of high approaches on both sides and relative stability.

Pritchard drew up the designs, but he died in 1777, a month after work had begun on the 30m-long single-span bridge. Abraham Darby III, grandson of the first foundry owner, agreed to continue the project, and all the necessary iron was cast at his Coalbrookdale furnace.

The masonry and abutments were constructed between 1777 and 1778, and the iron ribs were then lifted into place during the summer of 1779. The 378t of ironwork was installed using two large wooden derricks powered by horses positioned along the riverbanks.

The bridge had a far-reaching impact on the local society and economy. It was always intended as a monument to the achievements of Shropshire ironmasters as well as a river crossing – it was an advertisement that gave their ironworks a competitive edge over their rivals.

The bridge remained in full use for over 150 years by ever-increasing traffic. It was finally closed to vehicles in 1934, when it was designated an Ancient Monument. The whole area of Iron Bridge Gorge was designated a World Heritage Site in 1986.