A steel-framed extension to the Belfast Waterfront conference and entertainment venue is the biggest single project in the city’s £150M investment programme. Martin Cooper reports.

The steel-framed extension links into the original concrete-framed Waterfront but the new build is a fully independent structure gaining stability from its own braced cores.

The extension is constructed over the existing service yard between the Waterfront Hall and the adjacent Hilton Hotel, and also extends outwards along the River Lagan embankment.

Elsewhere there are a number of flexible breakout meeting rooms, many of which can also be divided into numerous smaller configurations. The extension also includes a fully fitted-out commercial kitchen to cater for up to a 750 person banquet, plant and back-of-house zones, circulation routes and a new feature riverside entrance and foyer. 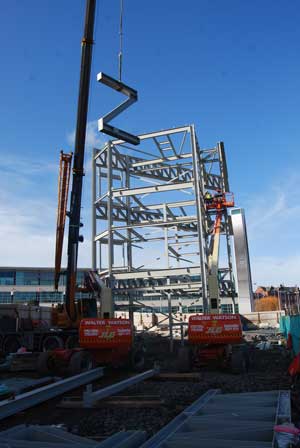 Z-shaped bracing is lifted into place 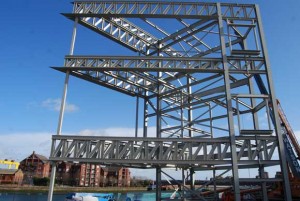 Main contractor McLaughlin & Harvey started work onsite last September and in 86 weeks the project will be complete with the first events pencilled in for May 2016.

“This is a very fast-track programme mainly due to our funding obligations,” explains Belfast City Council Project Manager Kieran Mooney.

“Nearly half of the project’s funding is coming from the European Regional Development Fund (ERDF) and it stipulates that the money must be spent during 2015 and so the project will be complete by 31 December.”

No pressure then on the construction team! To their credit the scheme is on schedule despite a whole host of challenges that have had to be overcome.

Enabling works and piling was predominantly completed last year, but not without a major service diversion scheme having to be undertaken first (see box).

Walter Watson started its steel erection programme in January and it is scheduled to complete this in June.

“The main challenge for us is the coordination of the programme between ourselves and groundwork and envelope works. Due to the restricted nature of the site the steelwork erection had to commence at one end of the site while groundworks continued on the remainder of the site,” says Walter Watson Project Manager Trevor Irvine.

This requires a high degree of co-ordination between the subcontractors to allow passage of plant and materials through the areas where excavations are ongoing and foundations are still under construction.

Further site restrictions arise due to the close proximity of both the Waterfront and the Hilton Hotel, with noise and vibration being kept to a minimum and continuously monitored.

The initial steelwork erection was carried out over the existing Waterfront service yard that is situated adjacent to the Hilton and is not being used during the duration of the construction work.

This area has the longest spans of the project, as the grid is 23.5m × 6m in order to accommodate turning trucks once the service yard is back in operation.

Spanning this ground floor area and supporting hall 1 A and B above is a series of plate girders varying in depth from 1,500mm up to 1,800mm.

The heaviest girder on the entire scheme is located here and it weighs 21.7t. This 19m-long section has connection plates that have a combined weight of 3t and required 70 bolts.

“The long spans required over the service yard, and the need to absorb big floor loadings and high frequency vibration from the hall above, meant stiff steel plate girders were the only option,” explains Doran Consulting Project Engineer Andrew Gardiner.

Forming the roof of the expo halls is a series of 23.5m-long tapered Westok rafters and secondary beams erected on a 3m × 3m grid.

The stiffness of the steel frame is very important, not just here but also in the extension’s other halls. The floors have to be able to absorb 10kN per m², while the roof steelwork will have to support rigging and exhibits weighing up to one tonne apiece.

Due to the project’s phased programme Walter Watson has also started erecting the eastern corner of the extension, overlooking the river.

On this part of the steel frame there are a number of large cantilever trusses, 1,250m deep and cantilevering out to a maximum length of 9m to form a feature element of the structure.

“With steel erection gangs working simultaneously, they will eventually meet up in the middle of the site. In this way we can keep the site accessible for our many other ongoing works,” sums Mr Donnelly.

‘The site has every kind of service crossing it,” explains McLaughlin & Harvey Contracts Manager Shaun Donnelly. “Gas, electricity and a BT fibre-optic cable, feeding a number of high-profile locally-based companies, all had to be diverted to the edge of the site.”

There is also a main sewer running beneath the site and diverting this would have been time-consuming and expensive. However, actually locating it proved to be very challenging exercise as historical plans of the site proved to be unreliable at best.

“We tried surveying the area but this couldn’t accurately pinpoint the sewer, so we had to excavate down 4m to expose the pipe all the way across the site,” adds Mr Donnelly.

Plotting the exact course of the sewer was critical for the piling installation, as some of the site’s 18m-deep CFA piles have had to be installed within inches of the pipe and hitting it with a pile would have been disastrous.