Posted on April 8, 2020 by NSC in Projects and Features, Technical, This month's featured stories

David Brown of the SCI reports on a recently completed research project, with some suggestions to increase still further the offsite content of steel-framed multi-storey buildings.

Offsite modular steelwork
Many designers would immediately comment that fabricated steelwork is already an offsite solution, produced in factory conditions – so what further is needed? This was the question for a research project funded by Innovate UK, led by BCSA, involving SCI, WSP, Severfield and Trimble, started in 2019. Before BREXIT and COVID-19, the UK Government had identified increased construction efficiency as a priority. Many will have heard of the so-called ‘platform’ approach to design for manufacture and assembly (P-DfMA) and possibly seen early examples of ‘kit of parts’ solutions intended to be used across a wide range of structures. The UK treasury are on record as suggesting that this approach can boost productivity whist reducing waste by up to 90%. The time was right to consider solutions that might meet this ambition.

The project was short – and was completed in February 2020. BCSA and SCI members will have received the two project deliverables – a short guide for building clients and a longer guide aimed at building designers. Both may be freely downloaded from steelbiz or steelconstruction.info

This article presents some of the project outcomes, hopefully as ideas to consider and develop in detail as required.

Project objectives
One of the initial objectives was to investigate the opportunities to integrate services into the steel frame, taking lessons from the light gauge modular industry, where this is normal practice. Repeatable units such as student accommodation or hospital wards (Figure 1) may be prepared as ‘plug and play’ units with most services pre-installed – so what can be done with multi-storey buildings? Opportunities exist, as the Latham report of 1994 identified: The contributions of … M&E contractors and consultant to the construction industry is immense. The more complex the building, the higher is the likely value of the M&E input… 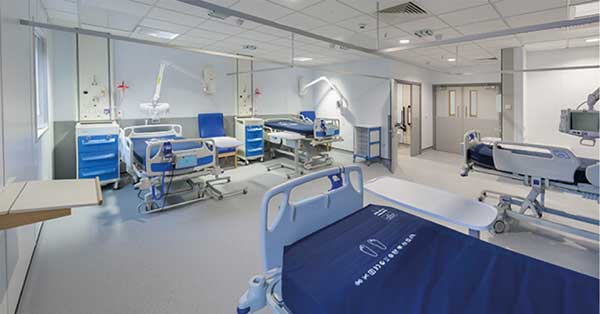 Initial enthusiasm for increased integration was dampened by a series of (current) militating factors:

If the benefits of prefabrication and preassembly of services are to be realised, the key principles are:

Structural solutions
The project also considered structural solutions involving increased offsite fabrication and assembly, which offer benefits to the end client. It should be recognised immediately that the ‘benefit’ may not be in reduced initial cost – in a competitive environment, one would image that initial cost has been driven down already. Instead, the benefits arise from:

The project team recognise that the solutions described below (and in more detail in the guides) have the status of ‘proof of concept’ rather than a ready-made solution. It is anticipated that solutions need finessing and modification to suit individual requirements and company manufacturing processes. Similarly, some of the solutions demand changes in responsibility compared to today’s construction processes, and probably revised commercial arrangements. As an example, casting large composite floor panels offsite would demand a change in responsibility, as a minimum.

Steel composite cores
Many multi-storey buildings are stabilised by a concrete core, slip formed or jump formed. Conventional wisdom is that this is the most cost-effective and appropriate solution. A steel composite core is certainly seen as more expensive in terms of initial cost. However, a steel composite core has thinner walls (so more lettable floor area), is lighter, so has the advantage of reduced foundations, and overcomes the common tolerance and connection issues at the interface between the concrete core and the surrounding steelwork. Before dismissing the solution, designers may like to review the news stories, videos and other resources relating to the Rainier Square building, Seattle, shown in Figure 2. 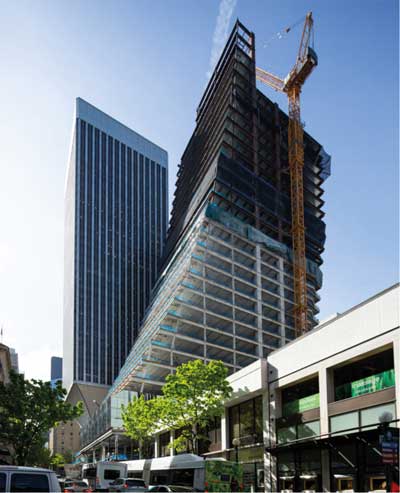 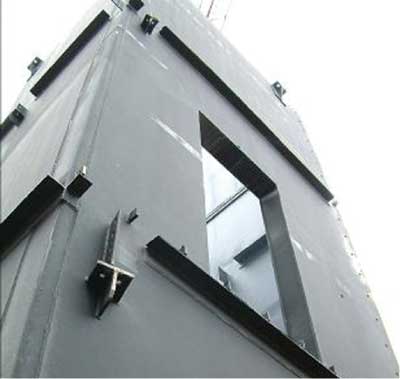 Figure 3 – Bi-steel core with connections for the surrounding steelwork

The 58-storey Rainier Square building is in the news because it is stabilised by a steel composite core, consisting of panels fabricated from two steel plates held apart by bars and subsequently filled with concrete. The headlines describe this as ‘radical’, a ‘game-changer’ and having a ‘revolutionary core’. The building was topped out after only 10 months, 8 months faster than the program for a conventional core, and reportedly with a 2% cost reduction (although detail on precisely which cost, or what has been valued, is not clear). What is clear is that this solution has generated some interest, with AISC (the American version of SCI) promoting the concept as ‘SpeedCore’, the name emphasising a key benefit of the solution.

UK designers may have a sense of deja vu, since an identical concept was being used in 2005, when it was known as ‘Corefast’. Back then, the system used ‘Bi-steel’ panels, which separated the steel plates with a bar friction welded to both plates simultaneously. Only one manufacturer produced these panels. Now, panels may be produced by bolting between plates, or by welding. In both cases, the connecting bar protrudes through the plate. From 2005 to 2009 there was limited use of the ‘Corefast’ system, when there were challenges with a conventional core, or (for example) when it was advantageous to erect a tower crane on the steel core. Case studies from the time indicate that the construction period was significantly shorter than a conventional concrete core.

In addition to the claimed time saving, additional benefits arise at the interfaces with surrounding floor steelwork. Core units and steelwork is erected by the same organisation, to the same tolerance – and brackets, plates and supports may be attached to the core steelwork to facilitate on-site connections as shown in Figure 3.

Steel composite cores may not be a panacea for every structure – but the concept deserves consideration.

Dry floor plates
The project considered the possibilities of completing floor panels offsite and erecting completed floors. This approach is common in light gauge construction – so could a similar concept be used in orthodox multi-storey buildings? The concept investigated comprised panels up to 12 m long and 2.4 m wide – three panels would therefore result is a column grid of 12 m × 7.2 m.

The floorplate itself could be orthodox composite construction, or cross laminated timber (CLT). The latter is immediately seen as more expensive, but it has obvious ‘green’ credentials, can be manufactured to precise tolerances and is readily demountable. A CLT panel 135 mm deep could span a panel width of 2.7 m, under a variable action of 3.5 kN/m², so the solution is relatively shallow.

Whether the floorplate is CLT or conventional deck and concrete, the longitudinal and transverse junctions between panels demand special attention. Adjacent panels would need to be inter-connected, so that the floorplate forms a diaphragm, meaning that edge members such as channels which can be bolted back-to-back are a possible solution. The fire stopping and acoustic barriers at joints between panels would also need careful consideration – which are all possible if carefully engineered, in addition to the normal considerations of deflection and dynamic performance.

Conventional composite construction is hard to beat for a shallow, economic solution, so the benefits of dry floor panels, such as speed and early access for following trades would need to be valued to make such a solution worthy of further development.

Where next?
More details of the solutions outlined above are available in the guides freely available from BSCA and SCI. The project team never imagined that solutions would be adopted immediately without further development. The objective was that solutions which deliver benefits – which would have to be valued against conventional construction – should be considered in the mix. It is said that the Rainier Square building would not have progressed without the shortening of the construction program resulting from the use of a steel composite core. Those responsible intend to use the system for several other structures. Encouragement, perhaps, for the designers in the UK to consider the possibilities for their own projects.