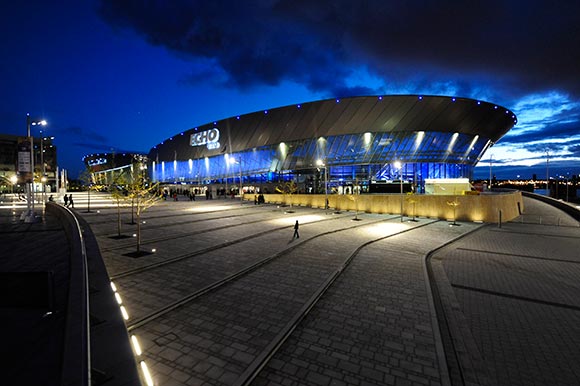 Steelwork played a starring role in the construction of one of Europe’s greenest venues and the first to earn a BREEAM rating. In the latest of our Project Revisited series, Martin Cooper takes his seat at the Arena and Convention Centre Liverpool.

Opened in January 2008 as an integral part of the city’s European Capital of Culture Year, the Arena and Convention Centre (ACC) Liverpool has quickly established itself as one of the leading venues in the north of England.

Situated on the banks of the River Mersey alongside the Albert Dock complex and within walking distance of a host of city centre amenities, the venue is a symbol of the city’s regeneration and is said to have contributed £620M in economic impact since opening.

ACC Liverpool comprises the 11,000 capacity Echo Arena and the BT Convention Centre which consists of a 1,350 seat auditorium, a multi purpose hall and 18 meeting rooms. It is one of the greenest venues in Europe, specifically designed with the most energy efficient, environmentally friendly green criteria in mind.

It has been designed to produce half the CO2 emissions expected from a building of this size while using 20% less electricity – lighting, for instance, is high efficiency and controlled by motion detection.

Outside, rainwater is collected on the roof which is then used to flush toilets, accounting for about 40% of the water used in the venue’s lavatories, while five 20m high low noise wind turbines on the riverside contribute to the electricity supply.

All of these features contributed to ACC Liverpool being the first venue in the UK to be BREEAM accredited – it received a “Very Good’ rating. 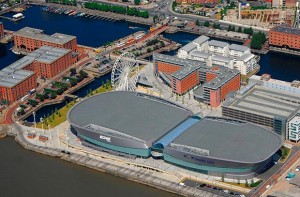 The ACC is now the centrepiece of Liverpool’s reborn riverfront 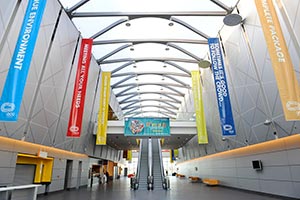 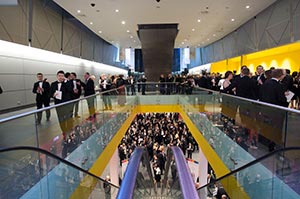 Flexibility means a number of events can take place at once

From the outset the project team’s aim was to construct an iconic structure utilising steelwork’s long span attributes. The Convention Centre portion of the building is a completely steel framed structure while the adjoining Arena is a steel frame sitting atop a concrete bowl.

The two level Convention Centre was formed primarily with large trusses to get the open column free space. The lower level required Severfield-Watson to install three pairs of perpendicular trusses which measured 50m in length × 4.5m deep and accounted for the project’s heaviest crane lifts.

Above this large open space and supported by the trusses is the second level auditorium and meeting areas.

Angus Palmer, Buro Happold Director says the entire Convention Centre is column free. “As the lower level doesn’t have columns it didn’t make sense to have any on the second floor either, and anyway the auditorium also needed an open plan design.”

Flexibility was also a key requirement as the venue can cater for events of differing sizes. The Convention Centre and the Arena can be used separately or as a large combined space.

The Arena’s floor links directly via the Galleria – a steel framed structure that joins both of the separate areas – to the lower level of the Convention Centre creating more than 7,000m2 of column free exhibition space.

“Steel was used to create the seamless architectural curves,” says Mr Palmer. “There is some complicated geometry involved and only steel could achieve this.”

Both the Conference Centre and Arena roofs are made of two layers, with the lower section forming an acoustic barrier while the upper section provides protection from the elements, as well as some additional acoustic properties. Between the two layers a 900mm void consists of an insulation layer and an air gap.

The Arena roof steelwork consists of some very long trusses, the longest of which are 80m-long and weighing close to 100t. These members were lifted into position in two separate 40m lengths. To give the Arena roof its curved effect the trusses vary in length and depth, from 6.5m to a minimum depth of 4m.

Each of the two curved roofs have deep grooves running along their length, and these areas contain plant rooms. The roof structures are also clad with bespoke sound proofing panels.

‘Having recently visited the project I can vouch for the fact that the venue has exceeded all expectations. Its flexibility and huge spans could only have been achieved using structural steelwork, while as a whole, the ACC Liverpool has been a catalyst for the wider regeneration of the Mersey waterfront,” sums up Mr Palmer.

When I visited the ACC Liverpool earlier this year I was fortunate enough to also take in a live performance by The Who performing their seminal 1973 album Quadrophenia in its entirety. 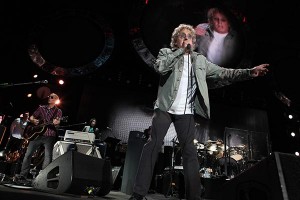 OK, the group now only comprises of two original members, but nonetheless Roger Daltrey and Pete Townsend, together with their latest band mates, still managed to extract what sounded like an exact representation of the renowned album.

Acoustically the Echo Arena is first rate with the sound missing the fuzzy distortion many venues’ PA systems are prone to.

We were sat on the middle tier, close to the stage, and the view was completely unobstructed. Sight lines are also excellent, as the Arena is column free and the banks of terraces afford everyone a good clear view.

Access into and out of the venue is quick and easy, while the high number of concession outlets meant that getting food and drink is devoid of lengthy queues.