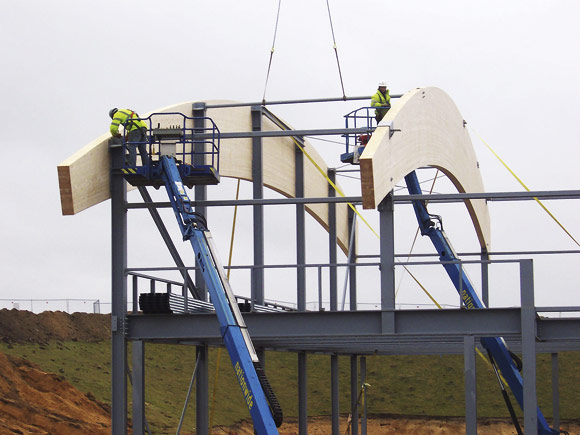 An unusual combination of a steel and timber frame has been erected for a new distribution centre, described as one of the greenest of its type in the country. The £5.8M project in Southwold, Suffolk, will provide brewer Adnams with nearly 5,000m² of floor space as well as an office area and plant room.

Being constructed by main contractor Haymills, the new distribution centre is due for completion in September 2006. Once operational it will increase Adnams’ present capacity and will form the culmination of a seven year investment in the company.

The structural steelwork had to be connected to Glulam roof beams – made up of layers of laminated timber, each 45mm thick, that are glued together to give large complete pieces of timber. These beams had to be over 2m in depth to support the green Sedum roof and are said to be the largest Glulam beams to be used on a construction project in the UK. The beams cantilever 11m over a series of 12m-long steel transfer trusses, which ‘pick up’ the timber beams at 6m spacings. 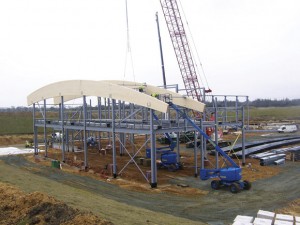 “Special care was taken in detailing, fabrication and erection of the steelwork especially with the connections to the Glulam roof beams,” Mr Howling says. “All of the steelwork connections had to marry up with pre-drilled holes and slots that were put in the roof beams when they were fabricated in Denmark.”

The steel frame and timber beams had to support a roof which is formed of Sedum, a living carpet of plants and grass which makes the roof heavier than normal. Principle Engineer from Faber Maunsell, the project’s structural engineer, Danny Wood says: “There was a lot of very close coordination between all parties involved to ensure that each component and connection matched up with the timber roof beams.”

The structure will include many environmentally friendly features and it has been predicted an excellent BREEAM (Building Research Establishment Environmental Assessment Method) rating. The building will be clad using lime and hemp blockwork, this will be laid in traditional lime mortar which absorbs carbon dioxide. Lime and hemp infill will provide insulation, regulating the building’s internal temperature.

Other green features include the installation of two collector solar panels on the roof that will provide up to 80% of the buildings requirement for hot water. Rainwater will be harvested and used to flush toilets and there will be an onsite foul treatment plant which will clean waste water making it pure enough to return it to a nearby pond.