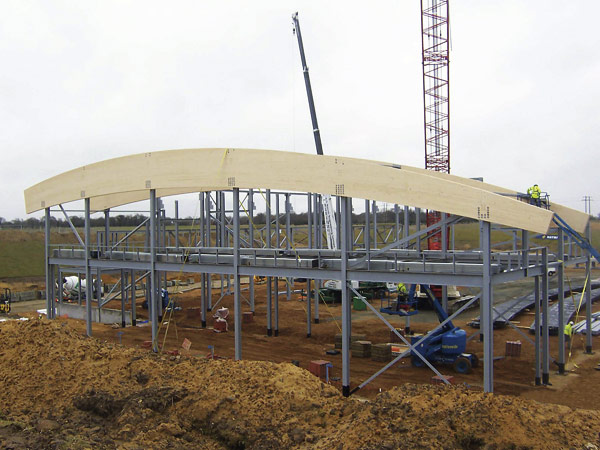 Described as one of the greenest buildings in the country, brewer Adnams’ new warehouse and distribution centre is currently under construction. The environmentally friendly building, being constructed by main contractor Haymills, is expected to be completed and operational by September.

Using a combination of steel and timber frame, the building will be clad with hemp, lime and chalk blocks and have a roof formed of Sedum – a living carpet of fleshy plants and grass.

The structural steelwork had to be connected to the two Glulam roof beams, each 41.6m long – these are said to be the longest Glulam beams to be used on a project in the UK. “Special care was taken in detailing, fabrication and erection of the steelwork, especially with the connections to the timber Glulam roof beams,” Mr Howling said.

“The steelwork connections had to marry up with pre-drilled holes and slots that were already in the prefabricated roof beams.”

The structure in Southwold, Suffolk, will have many ‘green’ features including including solar panels in the roof which will provide 80 per cent of the facility’s hot water. Rain water, which will be harvested from the roof, will be used for the facility’s washing equipment. In addition, the building will have its own waste water system which cleans the water and returns it to a nearby pond.