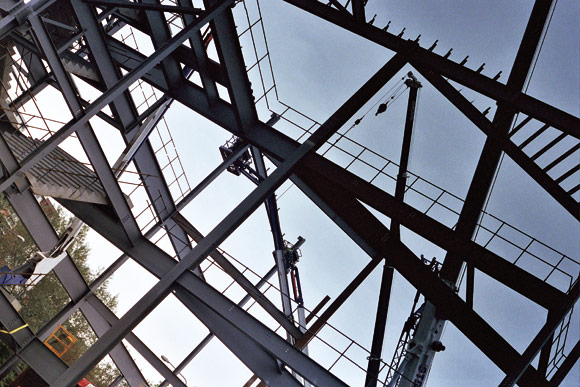 A sloping site, archaeological finds and getting steelwork onto a restricted town centre location were just some of the project’s challenges. Martic Cooper reports from Wigan’s Grand Arcade.

As town centre developments go, Wigan’s Grand Arcade has thrown up more logistical challenges than most.

As well as being surrounded by busy roads on all four sides and the site being so compact that 98% of its area will be built on, there is also a 16m slope running from the north end of the development to the southern perimeter to contend with.

“There have been quite a few challenging aspects to this project, mostly connected with our extensive preparatory works,” Mark Richardson, Building Manager of Shepherd Construction explains.

And then he mentions the archaeologists. This word can send some contractors into a panic, as they can hold up projects if significant finds are unearthed. But Mr Richardson says a large team was on site for quite a while during the demolition phase and Shepherd Construction had to basically plan around them.

“As existing buildings were demolished we opened up the site for the archaeologists,” Mr Richardson says. “They just followed the demo team and it worked well.”

Once demolition and ground clearance began no-one really knew what they would find or how historic Wigan’s town centre would prove to be. Eventually over a kilometer of assessment trenches were excavated which revealed, among other things, Roman and medieval foundations and a vast array of historic artifacts.

The majority of the finds will eventually be housed in a local museum, but the foundations of Roman buildings were temporarily opened up for viewing. “We had a few open days for school children and other interested parties to look at the site,” Mr Richardson explains. “Unfortunately, these remains could only be viewed for a brief period and they’re now buried beneath the project.” 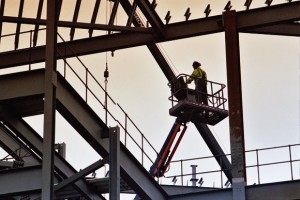 Steel erection has been prioritised 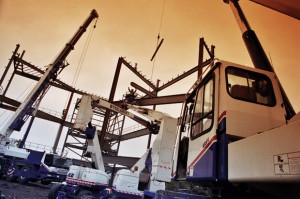 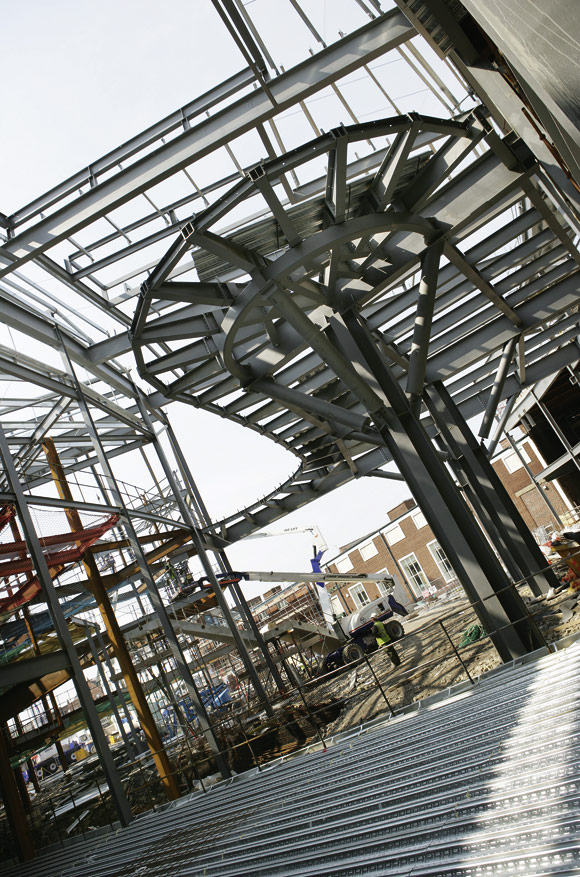 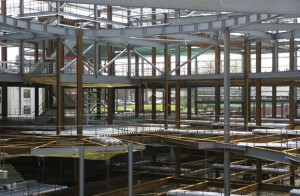 Much of the shopping arcade sits above a void

Once the archaeologists had left Shepherd still had to sort out the sloping site before steelwork erection could get underway. In order to create a level work surface, the company created a stepped site with a number of retaining walls which then formed an underground void which runs up approximately 60% of the project.

“This was a big challenge which was solved by building walls with the project’s spoil and kept in place with a geogrid,” Mr Richardson says. By utilising the project’s demolition material in this way, Shepherd estimates that 1,000 less truck movements were needed, which was good news for local residents.

More than 3,000 piles were also used to stabilise the site and a large scale grouting operation was needed to in-fill a number of old mine shafts which were discovered beneath the site.

Shepherd actually started on site in January 2005, and the site was finally ready for the steelwork erection in September. Taking into account the amount of preparatory works Mr Richardson stresses once steelwork erection did begin it was immediately prioritised.

“Getting the superstructure up is the most important aspect of the project and all other trades are now working around the steel erectors,” he says.

Over a period of 34 weeks, 4,500t of steel is being delivered to site and erected by Severfield Reeve Structures. The majority of the Grand Arcade is a steel framed structure, excluding the attached multi-storey car-park

Steve Pinkney, Severfield’s Project Manager explains that the most difficult aspect for steelwork was getting the material on site in an erectable sequence to feed the cranes and consequently meet the programme.

“It was vitally important that we got our loading, fabrication and erection sequence correct to ensure that steel erection could continue on both the higher north side and lower south side of the site simultaneously,” Mr Pinkney says.

“It was also important that we did not block off any of the three available delivery gates,” Mr Pinkney adds.

As Debenhams was completed two erection gangs then moved to the western side of the site and begun working east. Once complete, the final block was then built up.

“However, the majority of the job is typical beam and stick,” Mr Pinkney explains. “The grid plans for the centre’s three levels don’t alter much.”

The grid plans for the four shopping centre zones vary from Debenhams large open-plan 12m x 10m to the smallest 7.5m x 7.5m grid plan which is used throughout the majority of the project.

Below the project much of the void created to level out the site is dead space, however a large section will be used as a service yard. The largest single steel members used on the project have been erected here to make a large column-free area.

Although the Grand Arcade’s multi-storey car park is predominantly a concrete structure, its circular entrance ramp has been formed with steel elements. One large 2,500mm deep x 21m long 25t girder supports the ramp, while UB sections were laid to falls on a 1 in 60 slope.

Darren Wright Project Manager of structural engineers Waterman says the most challenging and interesting part of the project is its feature floating food court situated 6m above the Arcade’s mall.

This complicated structure is supported by four 1016 UB cruciform columns and a number of main beams. The food court has UB infill steels which connect to the main frame on one side and cantilever to the other.

Scheduled for completion in March 2007, the massive 425,000 sq ft Grand Arcade is set to transform Wigan. The scheme incorporates 35 retail units and the provision of another new multi storey car park. More than 75% of the development has already been pre-let with tenants including Debenhams, Marks & Spencer, Next, HMV and Waterstones. Phase 2 of the scheme is also now on the drawing board, this will include an 18-storey mixed residential and office block occupying the area currently used by the project’s site offices.