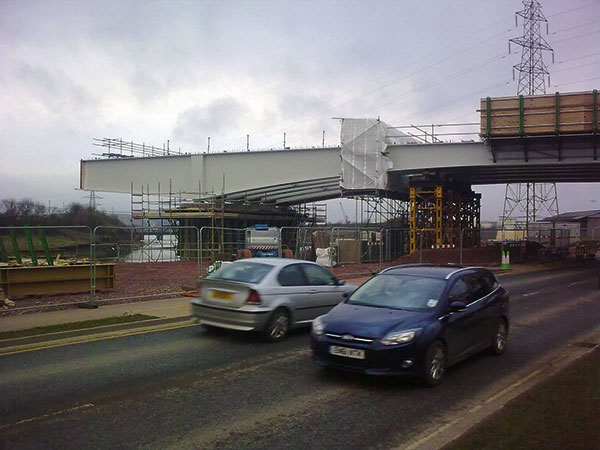 The replacement of Workington’s Northside Bridge took a significant step last month (February) as the first steel girders were lifted into place.

Mabey Bridge is installing and fabricating the steelwork for the project which will see a new bridge constructed over the A596 and River Derwent. The new structure is being constructed on the site of Workington’s original Northside Bridge which was swept away during the devastating floods in 2009.

The new bridge is 152m-long and has three spans supported by two concrete piers. Steelwork is being erected in three phases with the initial stage involving the installation of the north side of the structure, comprising of six pairs of braced girders.

Three pairs of girders are 30m long and the other three are 23m long; as the shorter girders feature a haunch, all of the pairs weigh 63t.

“During April we then plan to install the south side of the bridge, which is a mirror of the north,” said Mabey Bridge Project Manager Andy Hosking. “We’ll then lift the mid section, which will have been assembled on site into three 46m long pairs, into place.”

Main contractor for the project is Birse Civils and the bridge is due to open in the autumn.