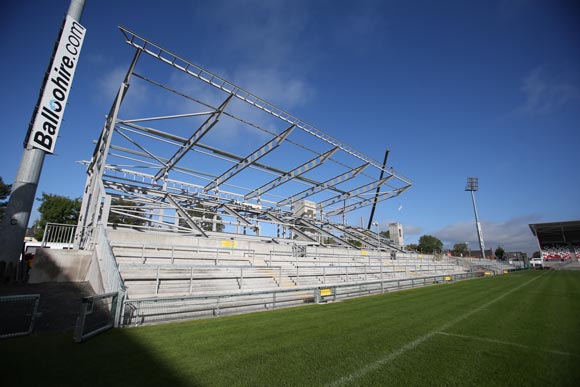 Three new stands have been added to Belfast’s Ravenhill rugby ground during a phased construction programme that allowed the stadium to remain open.

FACT FILE
Ravenhill Stadium, Belfast
Main client: Irish Rugby Football Union
Architect: Holmes Miller/Hamilton Architects
Main contractor: Gilbert Ash
Structural engineer: Horgan Lynch/WYG
Steelwork contractor: Ballykine Structural Engineers
Steel tonnage: 800tRavenhill Stadium in south east Belfast is the home and administrative centre for the game of rugby union in Ulster as well as the ground of the city’s professional rugby club (Ulster). As such it is an important regional facility, but one that has been held back from hosting major games, such as the latter stages of European rugby’s Heineken Cup, by only having a capacity of 11,400.

To rectify this situation, a two phase redevelopment programme kicked off 2008 when a £5.5M stand, boasting 20 high-spec corporate boxes, 532 premier seats, and bar and restaurant facilities, was constructed.

Following on from this work, the second phase has just been completed. Phase two has seen main contractor Gilbert Ash demolish and replace the old grandstand and build two new stands at the ends of the ground, resulting in an increased stadium capacity of 18,000.

Importantly for the local rugby scene, construction work for phase two was staggered, with one stand built at a time during an 18 month programme. This allowed the stadium to remain open throughout the work, albeit with a slightly reduced capacity. 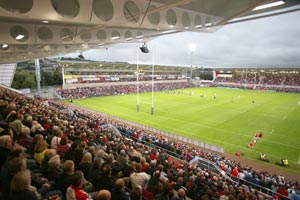 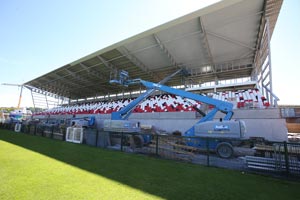 No plant equipment was allowed on the pitch

Two new stands at either end of the ground were the first to be constructed early last year. Work began on the Memorial End Stand, which provides seating for approximately 2,400 spectators with terracing for a further 1,350 fans. It also houses a shop, bar/catering facilities and the Nevin Spence Centre – a new heritage and education facility which will celebrate the evolution of the game and its positive role in contributing to a healthy lifestyle.

Both the Memorial and Family Stands were built simultaneously, although the steel programmes were staggered with one stand following the other.

The Family Stand is the stadium’s new family area and provides covered seating for 2,100 people with terracing for a further 1,300 fans. The stand is also the Ulster rugby team’s new training base, housing a gym, meeting rooms and an indoor training surface.

“The Memorial and Family Stands are very similar requiring 200t and 250t of steel; we erected them in two weeks and two and a half weeks respectively,” says Ian Kerr, Ballykine Structural Engineers Managing Director.

When both ends of the stadium were completed, work was able to start on the main grandstand at the end of last year. After the old structure was demolished, the largest and longest steel programme was undertaken as Ballykine spent four and a half weeks erecting the new Main Stand.

This structure has a capacity of 3,450 seated and 3,400 standing spectators. It also accommodates the player’s tunnel, team changing rooms and associated facilities, as well as corporate and public catering areas.

Construction of each of the stands followed a similar schedule of demolition of the existing structure, groundworks, steel erection, concrete terrace installation, cladding and general fit-out.

Kevin Callaghan, Horgan Lynch Project Engineer says: “The three steel frames are each fully braced with the addition of moment connections to mitigate against dynamic loading. We also use lift shafts to provide additional stability.”

The three structures are built around similar grid patterns, 6.8m for the end stands and 7.4m for the main stand. The steel frames incorporate 15m long raking beams forming the terrace and seating areas. Ballykine delivered the raking beams to site complete with brackets, welded in place, ready to accept the precast terrace units.

The Memorial End and the Main Grandstand both contain three internal floor levels, while the Family Stand has four floors, as it contains an extra basement level housing the indoor training facilities.

For the entire construction programme the stadium’s pitch was strictly off limits to the project team, consequently all plant equipment such as cranes and MEWPs had to be positioned to the rear of each stand.

However this was not possible on the Family Stand and so its basement level proved to be invaluable to Ballykine during its steel erection programme as Mr Kerr explains. “The two other stands have either a car park or an access road behind them, providing room to position cranes. However, there is a school directly behind the Family Stand so we had to use a temporary ramp to get our crane into the basement and erect the structure from within its own footprint.”

All of the stands are topped by cantilever roofs formed with a series of 20.1m long × 1.13m deep cellular beams, each weighing 3t.

These are the project’s longest and heaviest steel elements and getting these members on to site proved to be a major challenge. Two sides of the ground (Family and Main Grandstand) can only be accessed via the Memorial Arch, a war monument positioned in the car park next to the Memorial Stand. The arch is a local landmark and could not be removed or altered in any way during the construction works.

The arch is only 1.5m wide and so movements of plant equipment and deliveries of materials were restricted.

The rafters for the Family Stand had to go through the arch and then around the back of the old main grandstand, which had yet to be demolished and replaced, to get to the work site.

“They would initially fit through the arch on a traiier, but as the old grandstand was still there, it prevented the long vehicles from making it around the very tight corner,” says Mr Kerr.

The solution was to offload the rafters at site and transport them individually through the Memorial Arch to the Family Stand using a forklift that Ballykine brought to Ravenhill from its fabrication yard.

The rafters for each of the stands were erected minus their purlins, as they would have hindered the terrace unit’s installation. Bringing these precast elements to site and then lifting them into place presented the contractor with the same challenges the steelwork contractor had encountered. As cranes could only stand to the rear of the stands, the terrace units had to be lifted over and then through the steel roof rafters.

The completely rebuilt stadium hosted its first game, the Heineken Cup quarter final between Ulster and Saracens on 5 April. Following this match, further fit-out was carried out prior to the official opening this month (May).