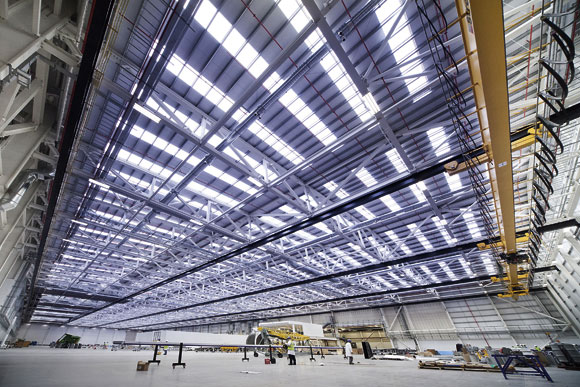 Bombardier has completed the first phase of a new factory for the production and assembly of high-tech wings for its C-series aircraft. NSC reports on how a steel frame created the necessary large open-plan manufacturing areas.

The facility, which is part of a £520M investment by Bombardier in its Northern Ireland operation, is being built to meet high environmental standards. Its layout and design are optimised for energy efficiency and minimal environmental impact.

Bombardier plans to commence production of the advanced composite wings later this year. Consequently, time was of the essence as far as the construction programme for the new facility was concerned and the first phase was completed in just 17 months.

Several local Northern Ireland companies have been engaged in the design, construction and equipping of the new factory. 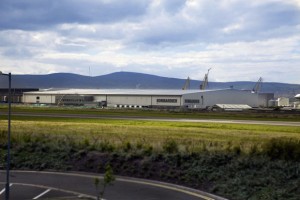 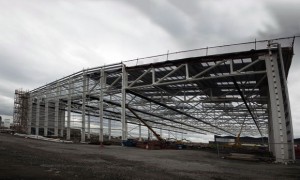 Roof trusses were brought to site in three separate segments 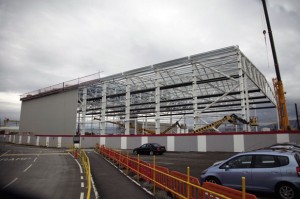 This list of locally sourced contractors included the steelwork contractor Fisher Engineering. It played a key role in the early stages of the construction programme, as the steel frame had to be completed on schedule to allow all of the follow-on trades to get started on time.

The building’s floor was one of the tasks which was started once the frame was up, and the project team was later thankful for taking the decision to sequence the works in this order. Once the steel programme was finished and the building was watertight, the weather took a turn for the worse, but due to the quickly and efficiently completed steel frame, the concreting was able to be completed, unhindered by the inclement conditions.

“In order to get the clear open spans, a steel portal frame was the only solution for this project,” points out Roger Knipe, URS Scott Wilson Project Engineer (Superstructure). “To make sure the tight construction programme was met, the steel was actually ordered from Fisher while the procurement process for the main contractor was still underway.”

In this way, the steel programme was guaranteed to be quick, as once John Sisk were appointed as the project’s main contractor, Fisher were novated to them by Bombardier and, most importantly, Fisher had already begun fabricating the 5,000t of steelwork needed for this job. “This probably saved us three months in total,” adds Mr Knipe.

The steel structure is a portal framed building incorporating two adjacent bays of 64m span roof trusses. Sharing the loads between the trusses are a series of spine girders (three in each bay) which run the full length of the building, in the opposite direction to the trusses. K-bracing is then located around the building’s perimeter, to provide longitudinal stability.

Large open-plan areas are the order of the day on this project, as the building is basically split in half, with two huge workshop areas adjacent to each other and both featuring 64m wide spans. One of these workshops is known as the Limited Contamination Area (LCA) and is a ‘clean room’ environment where wing components are manufactured in highly controlled atmospheric conditions. To keep the air clean and within tight temperature and humidity tolerances, the area is served by a huge array of air handling equipment, all suspended within the steel roof trusses.

The roof trusses, for both the ‘clean room’ and the production area, are tapered and up to 6m deep, carrying up to 15t in weight, from the various air handling equipment and cranes. Both areas have overhead gantry cranes whose beams are attached to the roof trusses. The LCA has three overhead cranes, while the main production area (which houses large autoclaves and various other machinery) contains just one 20t gantry crane which runs the length of the facility.

Fisher had to make 64m long trusses in three separate assemblies, to make transportation to site viable. Two 20m long end-sections were fabricated and delivered to site as completed units, while the mid-sections, which are also the deepest parts (at 6m) of the truss, were delivered to site piece-small and assembled on the ground prior to the lifting procedure.

“Three cranes were needed for the truss erection sequence,” explains Michael Moore, Fisher Engineering Project Manager. “Two cranes lifted one end-section each and allowed these to be bolted to the supporting columns. While the ends were being held in place, a third crane lifted the assembled mid-section and this was then bolted to the two end-pieces.”

Separating the two workshops, which run the full length of the 200m long building, is one single row of 16m high internal columns, spaced at 8m intervals. These columns pick up the clean room trusses at a height of 9.7m and the other area’s trusses at 12.5m. The columns then carry on upwards to form the building’s distinctive roof.

‘The roof trusses are at different heights because of the adjacent airport,” says Mr Knipe. “The clean room area of the building is closest to the runway and was restricted by the Civil Aviation Authority’s clearance line.  It couldn’t be higher than 9.7m, while the production area, as it’s further from aircraft movements, was permitted to be higher.”

All involved this job agree that the steelwork erection and procurement played a key role in the construction of this factory.