Hangar cleared for take off 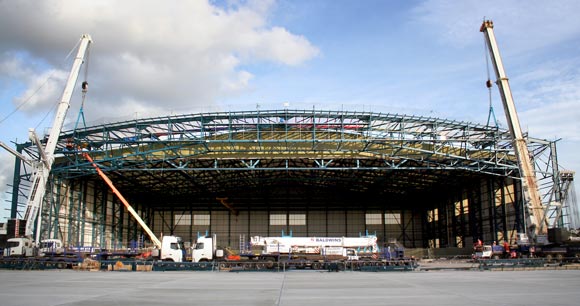 The installation of a 100m long steel truss has helped enlarge an existing hangar at Bournemouth Airport, allowing the structure to house larger aircraft.

Since then the airport has undergone a rapid expansion with the addition of more flights and new departures and arrivals terminals opening in 2010 and 2011 (NSC May 2011) respectively.

To maintain its improving regional status, further enhancements are planned, one of which is the extension to Hangar 12, work which will allow the building to house the latest aircraft – planes that are too big to fit into a structure originally built in the 1990s.

Working with main contractor Civils Contracting and Megadoor, an aircraft door specialist, REIDsteel has erected the hangar extension, a structure that has a 100m clear span, is 12m deep and 21m clear to the top of the central hangar door.

The extension is formed by a pair of spliced trusses, each 50m long and 5m deep, which are supported on four 18m high columns.

For stability the extension is connected to the original structure by bracing at eaves level in order for the gable wind loads to be transferred into the existing bracing system.

With such a large clear span and no temporary towers or intermediate columns to provide restraint in the temporary condition, it was decided to assemble both trusses together at ground level in order to form a stable box truss.

“The pair of trusses were unusually difficult to design, manufacture and erect,” says Richard Hanson, REIDsteel Project Engineer. “The roof apex height could be no higher than the existing hangar’s ridge, although the clear height had to be higher. The pair of frames also had to resist the thrust from door posts at varying heights which induced substantial torsion in the assembly.”

The doors span the full 100m width of the structure and had to be suspended from the frame. The tolerances were very tight and the weight of the assembly made adjustment of the doors after the lift virtually impossible.

“The assembly of a three dimensional and heavily braced structure requires very exact fabrication and erection, and the sequence of build and lift needs exquisite control,” adds Mr Hanson.

Prior to working on site a lot of design coordination between REIDsteel and Megadoor was required to ensure there would be no design clashes. It was imperative that steelwork would not interfere with the working mechanisms of the hangar’s vertically lifting doors.

The trusses were assembled on trestles positioned close to the existing hangar. The trestles had to be designed for a number of phases, always allowing for a safe and efficient sequence of erection. BIM software was used to view sequential load cases which had to be analysed as several separate models for each phase.

A removable A-frame was designed into the truss to allow for safe erection and dismantling. At each end of the assembly two universal beams fed the loads of the structure into bespoke lifting equipment made up of steel plates and a thick cylinder acting as a pin that was designed to accept the substantial shackles of the crane lifting gear.

Once the pre-assembly work had been carried out the 140t truss was lifted into position using a 500t and a 1,000t capacity crane.

The weather needed to be calm for lifting such a large piece of steelwork. However, the unpredictable and windy British weather during December meant the procedure was initially delayed by two weeks. Then finally the wind dropped and the programme was brought forward 24 hours to take advantage of a perfectly still day.

“With the help of Civils Contracting and Bournemouth International Airport, we were given the green light to go ahead with the lift,” says REIDsteel Designer, Richard Callaghan.

Last minute adjustments were made to connections so the team could be as certain as possible that the shape would be right after the lift. A significant and precise precamber had to be designed and detailed into the assembly, given that the final shape of the frame could not project above the apex of the original hangar nor be outside the onerous tolerances required for the door installation.

“All personnel were on site early and ready to lift the frame as soon as the light permitted. The complex nature of a lift of this magnitude merited the earliest start possible due to the hire cost of the large cranes,” explains Mr Callaghan.

“When the frame was lifted off the trestles and the lifting gear looked solid, I could relax a little. As time went on, and the truss was slowly lifted into place, it was only connecting the frame to the columns which remained a concern. As expected, bolting the frame into place proved a long and laborious process. However, thanks to the hard work and level heads of our team of erectors, the connections were successfully completed.”

All in all, the REIDsteel project team says the day proved to be a success. The lift started promptly, the weather remained calm, the truss was lifted into place safely, the difficult connections were overcome and the client and the main contractor were happy to see their frame safely installed in between some of the worst weather experienced in many years.

Once the steelwork was complete REIDsteel began cladding the exterior in order to allow the door to be fitted and installed, and the remaining internal floor slab to be laid. Hangar 12 is due for completion in May.