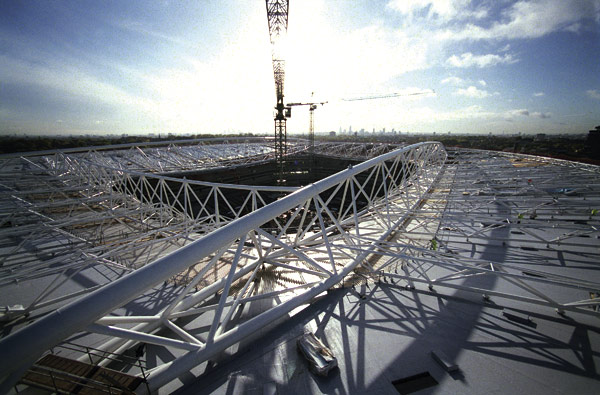 The dished roof profile slopes gently towards the pitch and its clear lines draw the eye towards the playing surface.

Arsenal’s 60,000 seat capacity Emirates stadium is, in the words of the judges, a prime example of how a major project should be managed.

A number of football stadia have been built in recent times, but the judges say there was a clear vision for the Emirates Stadium. They had well considered detailed designs integrating the client requirements into a visually striking structure, and best value solutions were achieved through leading edge technology.

For the form of the stadium, an elliptical bowl was chosen as the most efficient fit for the awkwardly shaped site, comments Geoff Werran, Project Leader for Buro Happold.

Topping the project, the stadium’s roof has been designed and shaped to give optimum light to all areas of the playing surface and to create an enhanced atmosphere. Consisting of approximately 3,000t of steelwork, it posed a number of challenges to the construction and design team. The site has limited access due to adjacent railway lines on two sides and to further complicate matters there was also a planning restriction imposed on its height.

What has been described as an intelligent steelwork solution was employed which incorporates a ‘dished’ roof profile, hung from the main structure. This enabled the main truss and secondary girder depths to be well accommodated. 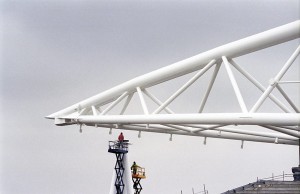 The roof slopes down towards the pitch so that the 15m deep truss at the front is hidden from the outside. The make up of the roof consists of two 700t parallel primary triangular trusses spanning 204m and 15m deep which were fully site welded because of their size. These rest on 11m high tripods at each corner and in turn support two 100m span secondary girders. This framework of main girders support 32 tertiary trusses which span back to the perimeter of the stadium where they are connected to a continuous ring truss.

Several costing exercises were carried out during the design stage and it was decided that tubular sections were the most cost effective. They gave weight savings, had less surface area and the fabrication details were simpler when using tubes in triangulated girders.

Andrew Hart, Watson Steel Project Manager says triangular elements are inherently stable and this was of utmost importance as each element of the roof had to be able to support itself. “This also applied to the temporary condition during erection,” he points out.

The roof girders which measure 15m deep x 10m wide were all delivered to site as individual components. The assembly was difficult and challenging because of the complicated geometry and temporary works were provided to locate all the individual components until they were site welded.

The girders were all assembled in halves and then lifted into position using large mobile cranes. “The main and secondary girders were too large to be fabricated off-site and transported to the project,” Mr Hart says.

Watson Steel says it introduced some new and innovative techniques into the fabrication process to ensure that the large complex individual elements had the necessary accuracy. This primarily involved using the X-Steel model of the individual components to produce a 3D template which was then orientated to provide the best build angle and level for the shop floor fabricators.

“The structural engineers had a roof design and gave us the figures for the pre-sets which we had to apply,” Mr Hart says. “It was very complicated.”

The designers also had to account for the stresses induced by the dead weight of each half of the roof and the central temporary support trestles were kept in place until the entire roof, including the perimeter ring truss, was complete and jacking down could commence.