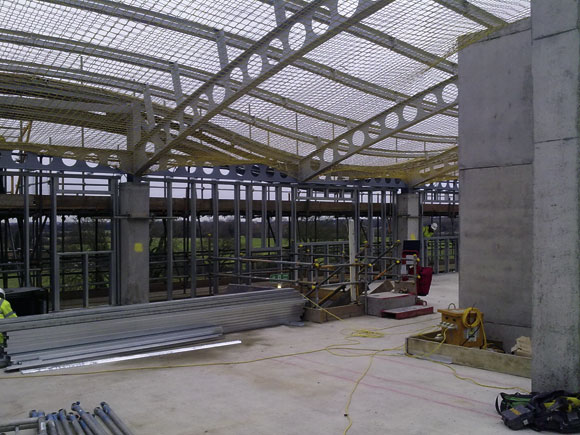 A new Thames Valley Police traffic base features a geometrically challenging roof, a structure which could only have been constructed economically with steel.

Under construction on the site of the old premises, the Buckinghamshire village of Taplow will soon have a new roads policing base and office, one which is adorned and topped with a highly challenging curved steel roof.Located a few miles to the north of Maidenhead, Taplow is not an area renowned for high-rise buildings or tall structures. However, by topping its three-storey police building with a curving roof, the new building – which is the tallest in its vicinity – will minimise the visual impact on the surrounding area while being a signature structure within the village.

With an overall floorspace of some 2,400m², the police building features a ground floor parking area with administrative offices alongside, while the upper two levels accommodate more office space. Structurally the building has a cast in-situ concrete frame which is then topped with the steel formed wave-like roof. 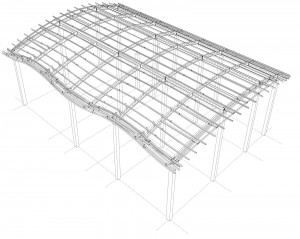 Model showing the curvature of the roof 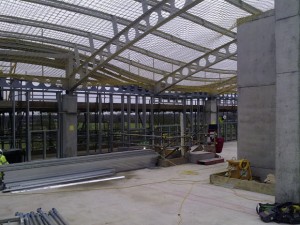 Steelwork connects to the concrete frame at roof level 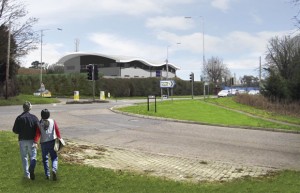 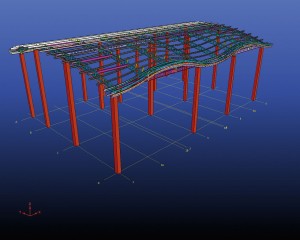 Explaining the rationale behind the project’s hybrid concrete and steel design, ttsp Architect Darren Stacey says: “When designing the project we quickly realised the only economical way we could achieve the desired curving roof was to use steel.

“It has a double curve and would have required a lot of formwork to achieve this shape using concrete. The cost comparison led us to steel.”

The building is founded on a series of 20m deep piles which in turn support the slab and the concrete frame. The building’s entire frame was completed, by main contractor Willmott Dixon, prior to steelwork contractor, Crown Structural Engineering, starting its steel erection programme.

This sequence allowed the steel erection team to work off of the completed concrete deck which forms the floor of the building’s second storey. Concrete columns were cast up to roof height and the steel structure is connected to these at ceiling level via holding down bolts.

Spanning the building’s width are eight identical steel curved cellular beams which form a barrel vault shape. Chosen for economic and cost reasons, the cellular beams were curved into the necessary shape during their fabrication process.

“Traditional beams would have had to have gone through a bending process, by choosing cell beams we cut down on a required process and saved the client money,” says AECOM Project Engineer David Cuckow.

Supported on the cellbeams and creating the roof structure’s double curve are a series of extended cleats to support the curved PFC purlins positioned perpendicular to the main rafters. These hot rolled purlins are all set at different positions to form the undulating shape.

As well as having the longitudinal double curve, one of the gable ends splays outwards, forming an ‘eyebrow’ over the main entrance area. To create this complex shape, where the roof is in fact sloping in three directions, the purlins’ radii have to change at every purlin line to ensure stability of the shape. The shape consequently requires every purlin connection to be a moment connection to the rafters.

“The double curve actually flattens out slightly as the roof reaches its apex, again complicating the design,” says Crown Project Designer Richard Noble. “Without 3D modelling a structure like this would have been extremely difficult to design.”

Mr Cuckow agrees and says: “Defining the geometry for the roof was the biggest challenge associated with this project.”

The roof also features three spine beams, one directly central and acting as an apex beam. All of these members are also cellular beams, but these were formed from three separate sections as their profiles change along their lengths.

“Another challenge was getting all of the cellbeams to line up in both directions, with no purlin locations near to any of the beam holes,” adds Mr Noble.

Designing the roof was not the only challenge faced by the design team, they also had to make sure the cladding system, in this case an upstanding seam, could be installed over such an unusual shape.

By producing the mock-up, the design team were able to ensure the roof’s steel design worked for the cladding, and the curves allowed rainwater run-off.

Once on site Crown erected the entire steel roof in two weeks, which allowed the cladding contractor to start its work on schedule.

Due to be completed during the Summer, Taplow’s new police building will have a key role to play during the London 2012 Olympics due to its close proximity to Dorney Lake (rowing venue), and its highly visual curving roof will make it a legacy structure in the Buckinghamshire village.