Steel plays a starring role in the latest Pinewood classic 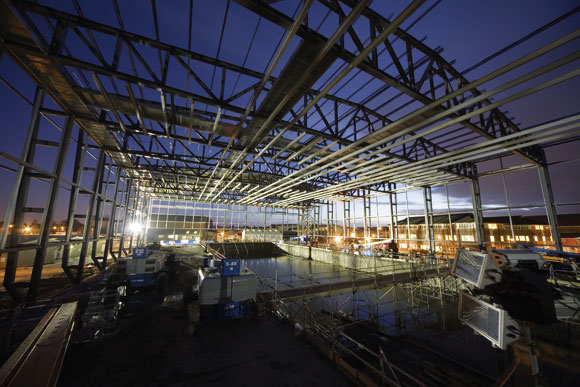 Speed was paramount for the design and construction of a new film studio. Martin Cooper goes behind the scenes to find out how a design and build job was completed in just sixteen weeks.

Designing and constructing steel structures can sometimes be a complex and time consuming process. But a new film studio at Pinewood has recently highlighted the speed with which a design and build contract can be completed with the use of steel and off-site assemble.

Pinewood needed the new studio to be rebuilt and functional as quickly as possible because filming is due to begin early this year for the next Bond movie.

Alan Pillinger, Bourne Engineering Managing Director says his company was contracted to a 16 week programme, which basically left his team with eight weeks to complete the steel-framed structural design, 3D modelling and then download all of the information.

“A condensed time-scale for the size of project,” says Mr Pillinger. “But the client knew from the beginning the constraints we were under and they allowed us to fix the geometry of the structure quickly, which helped enormously,” he adds. 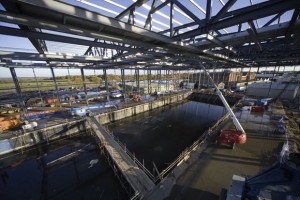 Bourne Engineering came up with a design for the new studio, which more or less covered the same footprint as the old building. “Our scheme was taken on-board by the client without any tweaking, as this would have added time and eaten into the programme,” adds Mr Pillinger.

Once the design was approved, sister company  Bourne Steel was also able to fabricate approximately 20% of the steelwork within the initial eight weeks.

As the new structure sits on the previous building’s footprint, main contractor Bluestone says it had minimal ground preparation to do before steelwork erection began. However, a site survey ruled out reusing the old foundations and consequently new column bases were needed.

“The new columns are founded midway between the old columns’ bases, so the new grid pattern is off-set by half a grid,” explains Mr Pillinger.

Nick Flexen-Cook, Bourne Steel Divisional Manager says this increased the length and width of the structure by about 5m. “Because of existing buildings on two sides, the new structure was slightly constrained as to how much larger it could be,” he says. “And, importantly, the whole building just has to cover the water tanks.”

The tanks, Mr Flexen-Cook is referring to just happen to be the world’s largest indoor water tanks, with a capacity of more than one million gallons. They were initially constructed for the 1977 Bond movie, ‘The Spy Who Loved Me’ and have since been used for major water scenes in most of the subsequent spy movie series.

The new building has a length of 102m, a width of 48m and is 19.2m high. This covers the main water tank, while a smaller interconnected tank is subsequently covered by a 28m x 15m lean-to structure.

“Inside the new building there is a 9m wide concrete apron around the tanks, on to which we were able to position our smaller cranes and cherry-pickers,” explains Mr Flexen-Cook. “Otherwise, the building’s floor will pretty much all be water and some very long spans, as no internal columns could be installed, were required.”

To support the roof and accommodate the 48m spans Bourne Engineering designed a series of 16 trusses. These large elements are 52.88m long, 4.3m deep in mid-section and 3m deep at the eaves. A further two smaller trusses, measuring 28m in length, have also been erected in the lean-to.

Each truss was brought to site in three separate pieces and assembled next the building. “We designed a set of trestles we dubbed “toast racks” into which we inserted the sections to enable them to be bolted together,” explains Mr Flexen-Cook. Once assembled the trusses each weighed 28t and required Bourne to bring a 400t capacity mobile crane onto site to lift them into position.

As well as spanning the water tank, the trusses also form another integral element of the building. Underslung from the bottom boom of each truss there is an interlinking grillage of runway beams – 405 in total – which have a global loading of 2.5kN/m².

“This is an equivalent loading to a multi-storey carpark,” explains Mr Pillinger. “The structure is therefore very rigid and the grillage will allow the film makers to hoist and hang scenery and equipment from trusses,” he adds.

The trusses also incorporate and support a network of maintenance pedestrian walkways, five running the length of the building and a further three spanning the width.

Another important part in achieving the 16 week programme was to fabricate and pre-assemble as much of the steelwork off-site in order to save valuable time. A prime example of this are the four internal staircases leading to the maintenance walkways.

These bespoke modular units were each delivered to site, by sister company Bourne Off-Site Solutions (BOSS), in five segments and then simply bolted together.

“This helped with the overall speed of the project,” says Mr Pillinger. “By installing modular units meant the staircases already came complete with linings and fire cladding, which negated having to employ other trades.”

The studio is due for completion this month, ending a successful programme which has seen a 3D model evolve into a finished structural frame in just 16 weeks. Despite all the fancy gadgetry at Q’s disposal, even he would have been impressed with that.