Built in a fast-track 32 week programme, the latest film and TV stage at Pinewood Studios has been dedicated to one of the British film industry’s most respected figures.

Designed and built for both film and television production, the recently completed Richard Attenborough Stage is one of the largest facilities ever built at the world renowned Pinewood Studios.

Requiring more than 420t of structural steelwork, the building covers an area of 3,000m², more than equal to two Olympic swimming pools, and reaches a maximum height of 18m. It is believed to be the tallest TV and film stage in Europe. 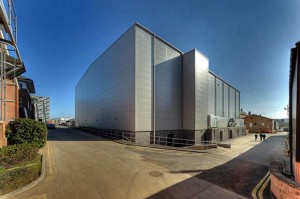 The building was in use immediately after handover 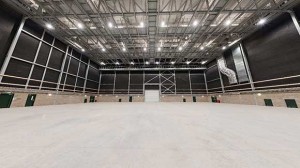 The building, which is 61.87m long and 45m wide, was completed in a 32 week fast track programme, within budget and on schedule. Pinewood wanted the Stage up and running as quickly as possible, and immediately following project handover it was being used as the film production of Les Miserables moved in to start building sets.

Roy Foster, a partner of Foster Willis Architects, says: “This was a very high speed project which had to meet exacting cost and performance standards. It was an outstanding achievement in such a congested, demanding environment.”

Pinewood Studios Group Chief Executive Ivan Dunleavy agrees and comments: “Recognising that we had various activities operating around the site, the project team’s flexibility enabled us to manage our ongoing business throughout a heavy duty construction project, which was very helpful indeed.”

Using steelwork helped the project team negotiate the confined and busy site conditions and meet its tight deadlines. Steelwork’s speed of construction is one of its main attributes and guaranteed the job was completed on schedule, while bringing much of the steel to site in small pieces limited large truck movements in and around Pinewood Studios’ narrow road network.

The Attenborough Stage is constructed on mass concrete foundations and trench footings which support the main braced steel frame. The perimeter of the structure’s frame is formed with a series of 18m high columns, spaced at 7m intervals. Most of the bays feature diagonal bracing, positioned within the extra thick wall cavities which also accommodate acoustic insulation.

“We needed to stiffen the structure up and prevent any potential ‘frame creaking’ so we opted for a braced frame as opposed to a sway frame,” says Alan Pemberton, MLM Operations Director.

Any frame movement or creaking (noise) would be unhelpful in a TV and film environment where sound recordings are taking place. The client said it had encountered this problem in the past with other types of studio buildings, so this structure has plenty of bracing to limit or negate any potential movement.

Spanning the width of the building and creating the clear open column free space are eight tapering roof trusses, which vary in depth from 2.7m to a maximum of 4.2m at the structure’s apex. The trusses are 45m long and were brought to site in small pieces and assembled into three sections. Once the three sections had been bolted together the trusses were then lifted into place as one large element by two mobile cranes.

“The trusses are deep because they are working overtime, supporting an array of essential studio equipment like cabling, high level walkways and runway beams for a crane,” says Bill Armstrong, Atlas Ward Structures Senior Project Manager.

High level walkways crisscross the roof, supported on the bottom cord of trusses, forming a working platform for maintenance, gantries and scenery hoists. There are five walkways spanning the length of the structure and eight spanning the width. 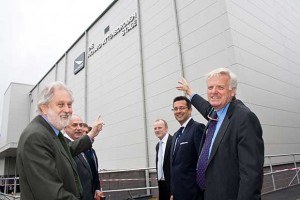 In a similar procedure to the trusses, walkways were brought to site in small sections to be assembled on the ground and then lifted into place as complete structures.

Underslung from the trusses are a series of runway beams for the studio’s overhead crane. All of this equipment and ancillary steelwork means the trusses are supporting an enormous amount and so they were designed to withstand an imposed loading of 3kN/m² over the whole roof area.

Atlas Ward completed the majority of its steel erection programme in eight weeks, with the main challenge being the confined nature of the site. “As we started erecting the perimeter columns and trusses we were gradually eating up the available space,” says Mr Armstrong. “Fortunately the trusses start 7m (one bay) in from each gable end, which meant there was room for our equipment when the last truss was erected.”

Each gable end of the structure is formed with lightweight steel which connects back to the trusses.

Summing up the project, LIFE Build Solutions Director Ken Adams says: “The Richard Attenborough Stage is the eighth project we have successfully undertaken for the Pinewood Studios Group, with the landmark Gatehouse complex opened by the Queen in 2007. We look forward to supporting our client for many years to come.”