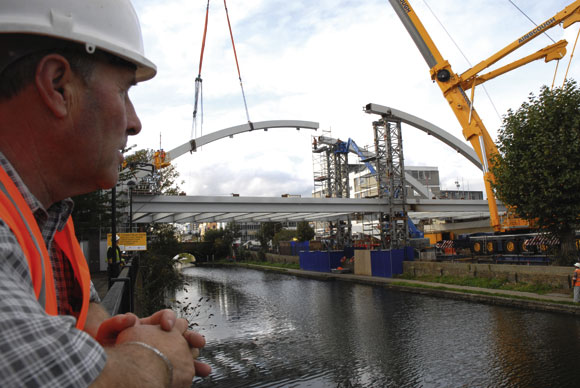 A total of ten new steel bridges have been erected as part of the northern extension to the East London Railway. Martin Cooper walks the line from Shoreditch to Dalston.

The tenth and final new bridge for the northern extension of the East London Railway was lifted into position during a four week period last Autumn.

The 350t, 48m-long structure spanning the Regent’s Canal, more or less brought to an end a nine month erection process which also included refurbishing a further 11 bridges on the line.

Part of a £900M scheme to extend the existing railway, the project will act as a catalyst for regeneration and will ease over-crowding on other rail and underground lines. Phase one of the project, will extend services north from Shoreditch to Dalston Junction and south from New Cross to Crystal Palace and West Croydon, with an operational railway being delivered by 2010.

The bridge replacement and refurbishment work, which was completed in December, is all part of a £35M enabling works package awarded to Taylor Woodrow Construction in June 2005 by Transport for London. Balfour Beatty is due to begin the main works this month (January).

Taylor Woodrow’s work mainly involved the northern extension and included preparing the line north from the Bishopsgate Goods Yard – where the new Shoreditch High Street Station will be built – to Dalston.

This northern section makes use of redundant lines and infrastructure once used by trains originating from the now closed Broad Street Station. Much of the new line will run along the 2.5km-long Kingsland Viaduct which is parallel to the A10. It is along the viaduct that all of the bridge replacement work has been carried out in conjunction with steelwork contractor Rowecord Engineering.

Mark Howard, Project Manager for Taylor Woodrow says it is a testament to the Victorian engineers that so much of the viaduct is still in good condition. “Apart from sections of strengthening, some brick replacement work and re-pointing, a lot of the structure is sound,” he says. 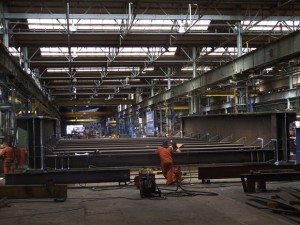 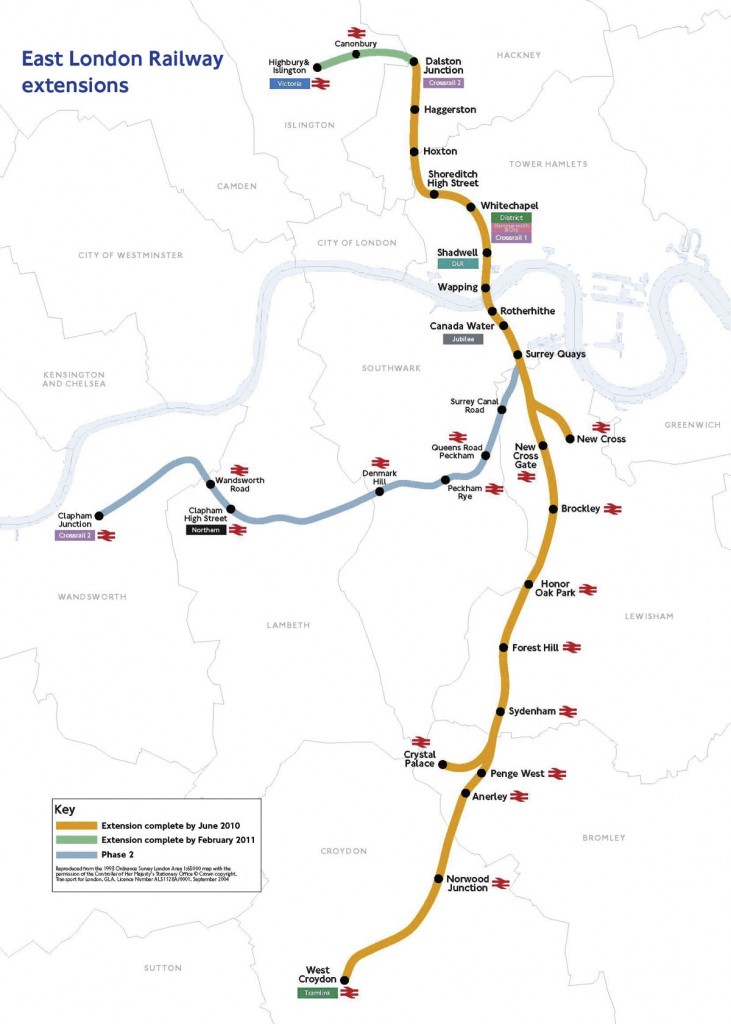 A second extension has been proposed from Dalston to Highbury & Islington 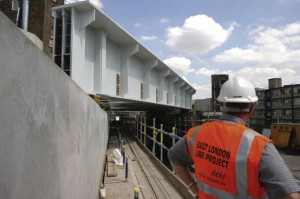 One of the 30m-long main girders gets positioned

As for the viaduct’s bridges, it was decided, after a thorough site inspection, that 11 bridges would remain in place and undergo refurbishment – including the Kingsland Bridge over the A10 – with the rest being demolished and replaced with new structures.

However, prior to Rowecord erecting any of the ten new bridges, some major logistical planning had to be undertaken. Wayne Powlesland, Project Manager for Rowecord, explains: “The streets around this part of London, especially either side of the viaduct, are very narrow and busy. So getting materials and plant equipment on site was very challenging and had to be planned well in advance.”

All steel was delivered at night, to avoid the heaviest traffic, and Rowecord looked at, and planned the best possible routes into London. There are almost 170 arches along the viaduct and 75% of these are rented by small businesses. “This was something we had to take into account during bridge erections,” Mr Howard says. “We had to ensure access was not obstructed by our cranes or materials and these businesses remained fully functional, which was difficult in some narrow streets,” he adds.

The two largest new bridges on the extension were also the most challenging, says Mr Howard. Towards the southern end of the viaduct, a bridge known as Union Walk Two required the largest individual sections and the erection was also compounded by the very tight and congested site.

“This bridge and the Regent’s Canal crossing were the most difficult,” Mr Howard adds. “However, we were lucky with the Union Walk Two structure as an adjacent building had just been demolished. We came to an arrangement with the landlord and this gave us extra space for the steel erection and storage.”

“The narrow alleys around Union Walk were too small to accommodate a mobile crane and consequently we had to position an 800t capacity crane 40m away from the site to get the needed radius,” Mr Powlesland explains.

George Lawlor, Associate Director for Faber Maunsell says he believes this to be the first tied arch bridge ever used on a heavy railway. “The client and local planning authority wanted a signature bridge and this design best suited their requirements.”

“There’s no particular reason why it has never been used for rail before, but tied arches have become popular with road applications and they’re certainly in vogue,” he adds.

Rowecord fabricated the bridge in 51 separate sections and erected it in a four week programme.  The main span is 30m long and then spliced sections at either end extend the bridge to its overall length. The structure is 10m high and 13m wide with a slight skew to give the correct rail alignment.

The original bridge was demolished in 2005 apart from its cast iron centre piers which were recently removed to storage. In order to accommodate the new structure’s extra loading, some major piling work needed to be carried on the abutments.

“We had to liaise closely with British Waterways during the erection process,” Mr Howard explains. “The canal had to remain open so we adopted a stop-go method of construction and every time a steel member was lifted we had marshalls on the canal banks stopping any barges.”

Rowecord also supplied and erected another eight bridges along the viaduct. Starting at the northern end, Middleton Road is a 17.4m long structure consisting of two plate girders and 7 x 9.5m wide cross members. The structure also included two collision beams and in total the bridge required 100.5t of steelwork.

“We did a trial erection at our yard and this helped when it actually came to the real erection process,” Mr Powlesland explains. “Knowing everything was going to fit exactly allowed for quicker erection programmes and most of the smaller bridges, like Middleton Road, were typically erected in one or two days.”

South of Middleton, Rowecord erected new bridges over Haggerston Road, Arbutus Street and Lee Street, all close to the soon to-be-built Haggerston Station. Further south comes the Dunston Street bridge and then the canal crossing. Between the canal and the Union Walk site, Rowecord erected structures over How Street, Pearson Street and Cremer Street, which are 13.9m, 14.1m and 12.5m long respectively.

Summing up, Mr Powlesland says contracts with this many bridges don’t come along very often and there was the potential for a number of hiccups. However, by working in close cooperation with Taylor Woodrow, all the structures went up in the alloted time. “Without any hitches which was pleasing in such a congested area,” he says.