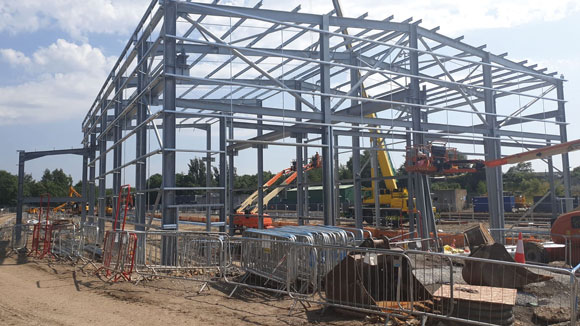 Coordination was key, as steelwork erection was completed while many other trades were also on site

FACT FILE
Newton Heath rail maintenance depot
Main client: Northern Railway
Main contractor: Stobart Rail & Civils
Structural engineer: Craddys
Steelwork contractor: Border Steelwork Structures
Steel tonnage: 390tTrain services in the North of England are getting a boost as Northern Railway is investing £20M to revamp its Newton Heath train depot in Manchester, in order to increase the maintenance capability of the site, which in turn will improve reliability and punctuality for its customers.

The company’s new diesel trains will be housed at Newton Heath and a team of 300 staff will be responsible for routine servicing, maintenance, upkeep and repair, much of which is carried out at night to keep trains in passenger service during the day.

Explaining the decision to upgrade its facilities, Northern’s Engineering Director Ben Ackroyd says: “We want to make sure we can get as many trains as possible in service for customers and to do that we need state-of-the-art engineering facilities and expert technicians and engineers.

“Train maintenance depots are the unseen critical element of the railway and we are delivering multi-million investment across the region to improve and expand these operations.”

The new train facility is being built by Stobart Rail & Civils, with Border Steelwork Structures (BSS) fabricating, supplying and erecting the steel frame as well as installing roof and wall cladding, and doors and louvres. 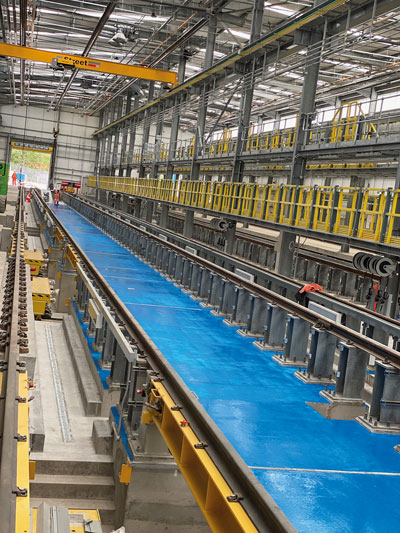 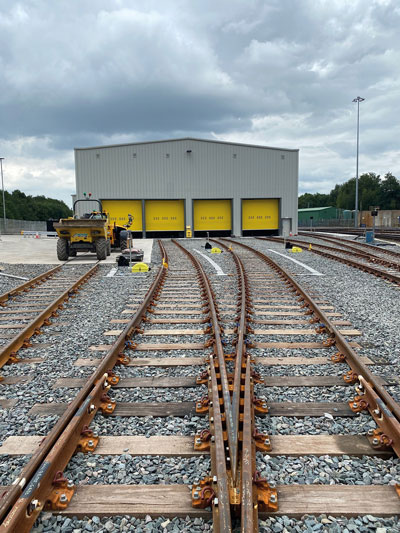 Overall the new depot is one large portal frame measuring 135m-long × 24m-wide, which contains four railway lines and two overhead gantry cranes that are incorporated into the primary steel structure.

Attached to one of the main elevations, the depot also includes a 91m-long × 5m-wide ancillary building that will house a two-storey office, workshops, a kitchen, toilets and a plant room.

The main frame is a twin-span propped portal, with a single row of internal columns running along the spine of the structure and splitting the building into two 12m-wide spans.

“These central columns are working extremely hard because as well as supporting the roof, they support crane rails on either side and maintenance walkways,” says Craddys Managing Director Colin Davidson.

Each span of the building has its own 10t-capacity overhead gantry crane. They are both supported on crane beams, which are attached to the perimeter columns and either side of the spine columns.

One of the structure’s spans has a maintenance walkway that allows workers access to trains at roof level. It spans one rail track and offers a safe working from height environment. One end of this walkway is supported from the hard-working spine columns and the other from a series of smaller steel members positioned between the span’s two rail tracks.

As well as the high-level walkway, the spine columns also support two lower walkways, one on either side, that allow access to the trains at the carriage and driver’s door level.

As well as being serviced by the walkways, the two central rail tracks, either side of the spine columns, are elevated to make maintenance work easier to undertake. This required BSS to install 520 steel stub columns to support these railway tracks.

Meanwhile, the two outer railway tracks have maintenance pits incorporated into the structure’s concrete substructure. One of these rail lines also has a vehicle lifting road, which is a floor designed with jacking points for 16 × 15t synchronised lifting jacks that can raise the carriages for maintenance inspections.

Previously these carriages would have to have been split to allow undercarriage components such as engines and wheel sets to be replaced. Having the ability to lift a whole train in one go will speed up renewals meaning trains can re-enter customer service sooner.

The new steel-framed depot is supported by steel piles and a grillage of reinforced concrete ground beams. The installation of these foundations could only commence once an extensive groundworks programme was completed.

The groundworks were completed at Newton Heath prior to the construction of the new maintenance shed. More than 50,000 tonnes of soil were removed from the site and 521 piles were sunk into the ground to support the structure. A reinforced concrete slab and holding down bolts were then installed, to allow the steelwork erection programme to commence.

Summing up, Stobart Rail & Civils’ Project Manager George Smith says: “With two roads mounted above pits and two on steel plinths, the concrete base of the shed includes some complex formwork and construction sequencing to deliver the varying finished floor levels. During design development, an optimised solution was formulated to use thickened ground beams that will also act as permanent earthworks support during reduced-level excavations. This minimised any temporary support requirement and provided a robust foundation of edge protection for the site team.

“Overall, the job is quite a complex build. The coordination of the various works and trades was the biggest challenge to us meeting the programme. Our sub-contractors, especially the steel erectors, had a lot of working from height, which had to be coordinated around other works.”