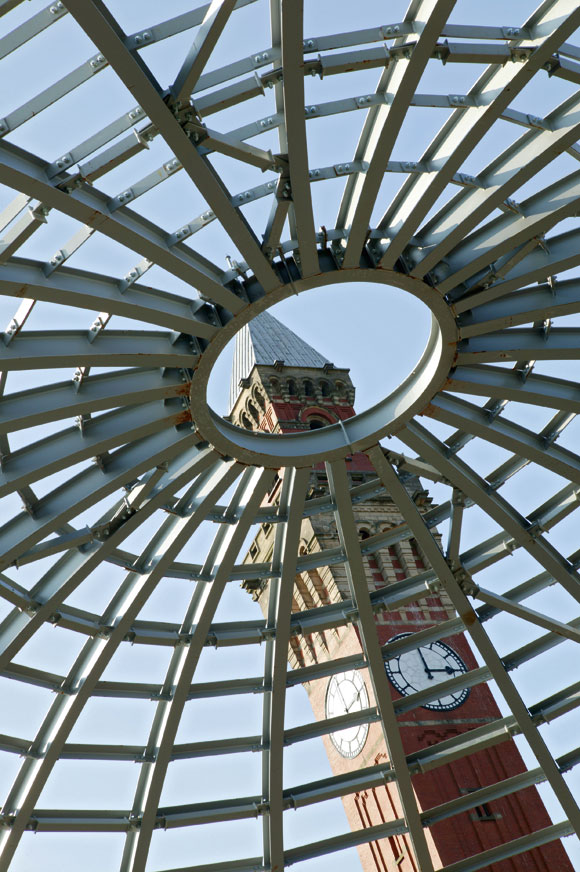 The new domed structure sits comfortably within its historic setting

The University of Birmingham is building a new concert hall, one which will provide state of the art performance and rehearsal space as well as enhancing the surrounding historic buildings. Martin Cooper reports.

This is a concise description of what is happening at the University of Birmingham, where a new auditorium, known as the Bramall Building, is being constructed within the historic redbrick semi-circle of buildings which have been the heart of the University since 1909.

The historic crescent was never fully completed; a missing segment was left out and a number of structures have stood in the plot over the years. None of these fully complemented the surroundings or the adjoining buildings, while the Bramall Building on the other hand will join up the two portions of the crescent. Facing the University’s famous clock tower, the crescent features three main T-shaped finger blocks, with the protruding sections sticking outwards from the back elevation of the block.

“The Bramall Building represents the missing fourth finger of the historic crescent,” explains BAM Construction Project Manager Scott Marsh. “Although the new structure is not supposed to completely replicate the original Edwardian architecture, a lot of time and effort has gone into ensuring it does fit and match the environment.”

To this end red bricks sourced from the Netherlands match the hue of the original bricks, stone for the exterior cladding has been purchased from the quarry that supplied the construction project in the 1900s, while architecturally the Bramall Building features identical elements to its adjoining structures, such as arched windows and doorways, and at rooftop level a dome – to be clad in lead – and four turrets. Internally, little or no expense has been spared, as oak paneling is the preferred covering for walls and flooring. 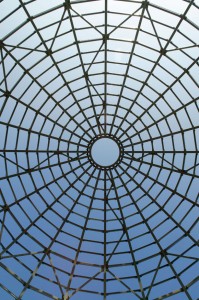 “Predominantly the design of the entire project has been acoustics driven,” adds Mr Marsh. “From the shape of the auditorium right down to the fact that the seating will have little or no padding, which again aids better acoustics within a concert venue.”

A point of interest is the shape of the auditorium, as previously mentioned the original crescent consists of T-shaped finger blocks, but this shape was not suitable for an acoustically driven music facility and so the new building is more coffin-shaped in plan, with two arms protruding from the uppermost elevations to link into the existing buildings.

Structurally the new building is steel framed, to create the open plan area for the auditorium and the domed roof which adorns the music rehearsal room at the front of the building.

The front portion of the new building, which is incorporated into the crescent and links into existing structures on either side, contains three floors and a basement. Ground floor contains a double height entrance foyer with a first floor balcony offering access to the upper tier of auditorium seating, at second floor level there are storage areas and the third floor houses the music rehearsal room.

A series of 15m long Vierendeel trusses create the open plan entrance foyer, and at 3.2m deep they incorporate the second floor level within their depth and support the uppermost floor.

The top floor rehearsal room is also a double height space, but this floor is topped with a feature domed roof. The dome creates the open column free space for the students’ music rehearsals while also replicating the style of the original crescent. With a 15m diameter, the roof dome structure contains more than 400 individual steel members.

“Erecting the domed roof was the most complicated part of the project,” says Rob McGann, Robinson Steel Structures Contract Manager. “In order to make the construction process easier, and bring the on-site piece count down, we brought some of the steelwork to site in pre-assembled segments.”

Having already erected the majority of the building’s main frame, steelwork contractor Robinson constructed the dome on top of the rehearsal room’s upper gallery. This upper zone gives the room its double height space and eight steel columns support the domed structure. Mirroring the University’s other domes, the upper gallery has a series of eight arched windows, brought to site as precast units and inserted between the steel columns.

Twenty four segments make up the entire dome, half of which were brought to site fully assembled. All of the segments are connected and tied together with a compression ring positioned at the apex. During the erection sequence Robinson had to build a temporary tower to support the dome’s steelwork. This structure had to remain in place, until the final steel element was bolted into position, as only then did the dome have sufficient self stability. 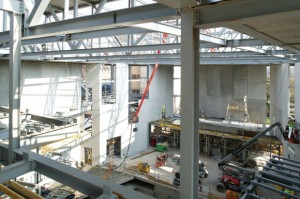 Each segment consists of two curved radial members tied together by bracing. The fully assembled segments were erected by tying each one together via intermediate segments which were constructed on site.

During the design stage a number of material options were looked at for the dome. Masonry, which would have replicated the adjacent dome, was discounted as too heavy, while timber was uneconomical. Accounting for approximately two-thirds of the building, the auditorium sits atop a concrete formed basement level – containing music recording studios, plant rooms and storage – with the main steelwork beginning at the ground floor slab.

This portion of the steel structure is ‘very complicated’ says Mr Marsh, as the auditorium features a number of cantilevering elements for balconies and the control room. The site is extremely tight and access is also limited due to a bridge with a low clearance. This meant steel deliveries were limited in size and had to arrive on a just-in-time basis.

The auditorium features a retractable stage, a separate balcony for an organ and 450 seats arranged over two tiers. A series of 4.2m deep trusses span the auditorium, these vary in length due to the shape of the structure, and most of them were assembled on site from two pieces.

The trusses will be used to hang lighting from, while within their depth there is a maintenance level formed from a tension grid system strung between the bottom booms. They also support the auditorium’s 300mm thick concrete roof, which has two differing levels; a lower perimeter level and a higher mid section. The trusses’ top boom supports the roof’s high level, while the bottom boom supports the lower perimeter level.

The Bramall Building is scheduled to be open in 2012.

Impression of the new Bramall Building within the historic crescent 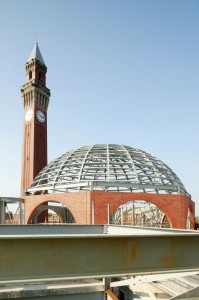 The initial 100,000 m² site was given to the university in 1900 by Lord Calthorpe. The grand buildings were an outcome of the £50,000 given by steel magnate and philanthropist Andrew Carnegie to establish a “first class modern scientific college” on the model of the Ivy League Cornell University in the USA.

The original domed buildings, built in Accrington red brick and forming a semi-circle to form Chancellor’s Court sit on a 9.1m drop, so the architects placed their buildings on two tiers with a 4.9m step between them. The clock tower stands in the centre of the Court.