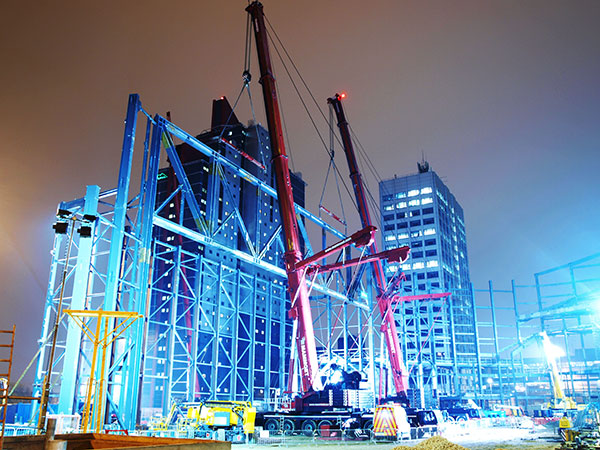 Two large mobile cranes perform a tandem lift to erect a 54m-long truss during the construction of the Leeds Arena.

Weighing 170t, the truss which will form the venue’s proscenium arch between the stage and auditorium, took 72 hours to fully erect and connect to the supporting steelwork. The truss is supported by large 30m-high columns, each weighing 30t.

Steelwork contractor Fisher Engineering brought the truss to site in 40 individual pieces, and assembled it on the ground before the mammoth lifting operation could get underway.

Erection has now started on 13 further trusses which will form the roof of the arena. These steel elements vary in length with the longest being 70m.

By the end of March 4,500t of structural steelwork will have been erected to form the Yorkshire city’s 12,500-seater arena.

Main contractor for the project is BAM Construction.