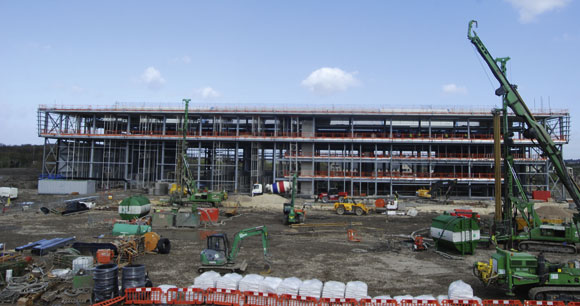 An industrial centre of nuclear manufacturing excellence is under construction near Sheffield. Martin Cooper reports on how a steel frame has proven to be an integral part of the project’s design.

Main Client: University of Sheffield, University of Manchester and a consortium of industry partners.
Architect: Bond Bryan
Main contractor: BAM Construction
Structural engineer: Buro Happold
Steelwork contractor: Elland Steel Structures
Steel tonnage: 1,000t
As a new generation of nuclear power stations are potentially in the offing, not only in the UK but also worldwide, opportunities will arise for British based businesses to cement their places in the nuclear supply chain.

The Government and major industrial players have recognised that it has been some time since the last domestic nuclear power plant was built, and many UK companies have not maintained or developed their expertise. To help reverse this trend and enable UK companies to seize the opportunities this growing sector will present a Nuclear Advanced Manufacturing Research Centre (Nuclear AMRC) is under construction near Sheffield.

The £25M Centre will be operated by the University of Sheffield and University of Manchester, in collaboration with industral partners led by Rolls-Royce. It is expected to draw together some 30 partner high-tech manufacturing suppliers who are committed to meeting UK demand and playing a significant part in global markets through the production of high-value, low volume systems and components. In short, it will be a centre of excellence for research and development, combining the expertise of academia and manufacturing. 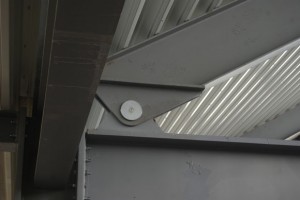 As well as advancing the UK’s low carbon manufacturing technologies, the building will also take advantage of a number of sustainable features, adding to its potential ‘BREEAM’ Outstanding rating. The structural steel frame is of course recylable and can be reused in the event that the building was ever demolished.

A twin bladed wind turbine will deliver 500KW of renewable power and ground source heat pumps will heat and cool the facility. A total of twenty ground source heat loops penetrate 100m below the ground and will provide a free source of sustainable energy.

Construction work on the former Orgreave coal mine site began last year, with BAM Construction completing its piling programme and casting the building’s concrete slab prior to steelwork erection commencing in December.

The structure’s slab was poured in eight phases and each one was completed overnight, as this guaranteed the materials delivery. The slab’s thickness varies from 800mm up to an impressive 2.4m in places, due to the large machinery which will be located within the building.

Once the slab was done, steelwork was able to begin, with steelwork contractor Elland Steel Structures having the benefit of being able to position its cranes and MEWPs on the completed concrete surface. Starting in December, the nine week steel erection programme was then completed on schedule, despite the inclement conditions which even required the site to be closed for two days.

The steel frame consists of a three storey office section at the front of the building and two large open plan workshop and research areas to the rear. The workshops are only separated by two rows of columns, which will remain exposed, and both areas will be served by its own overhead gantry crane; units that run along crane beams attached to the structural main frame. 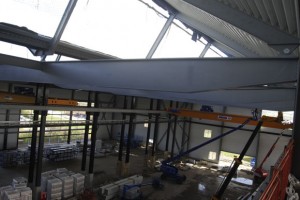 One of the workshop areas features a wedge shaped roof, with north lights which will allow natural daylight to penetrate the interior

Elland Steel supplied the crane beams which then have a crane rail system clipped to the top of the heavy column member. Tolerances were extremely tight and had to be within 7mm for the beams which are 23m long.

Bracing provides the stability for the building which is arranged around a regular 7.5m grid pattern. The only exception being the two workshops which run the full 100m length of the building and are both 23m wide column free spaces.

One of the workshops is topped with a feature northlight roof which consists of two rows of sawtooth wedges, which will be glazed on the north side to allow natural daylight to penetrate the building.

To form this section of the roof Elland Steel fabricated 12 frames, with each one consisting of four individual sections, each measuring 13m x 5m. These were erected individually and as each piece was not free standing, temporary bracing was installed until each spanning frame was completely erected.

“The roof frames are joined to the supporting columns by pin connections, chosen for their architectural appearance,” says Mr Howdle. “Slotting the frames into position went extremely well, and having the prepared slab to work off of probably helped with the problem-free erection.”

The other workshop area, (the one furthest from the offices) features a flat roof, formed by a series of 23m long plate girders, each weighing 6.5t.

The front portion of the structure is occupied predominantly by a three-storey office and administration block. Approximately two-thirds of the front elevation is occupied by all three office levels, with the top floor extending onwards right across the frontage.

Steelwork for this zone was erected around the same 7.5m grid pattern, but the structural design incorporates anti vibration and movement joints, to isolate the offices. Although both parts of the building are in fact one structure, they need to be semi independent due to the work which will be undertaken in the workshops.

“In order to isolate the office block, we had to install steel plates bonded with a PTFE and elastomeric pad, between one row of columns and the connecting beams to facilitate a movement and anti vibration solution,” explains Paul Kitching, Elland Steel’s Technical Director.

Fronting the office’s main entrance are a row of five feature columns, each 10m high. These 200mm diameter CHS members have a tapered conical shape, top and bottom, and are connected to the main frame via pin connections.

These columns are a feature element and will highlight the building’s main entrance welcoming visitors and staff into this highly important facility. Construction work is scheduled to be completed by the end of the year and Nuclear AMRC will be operational in 2012. 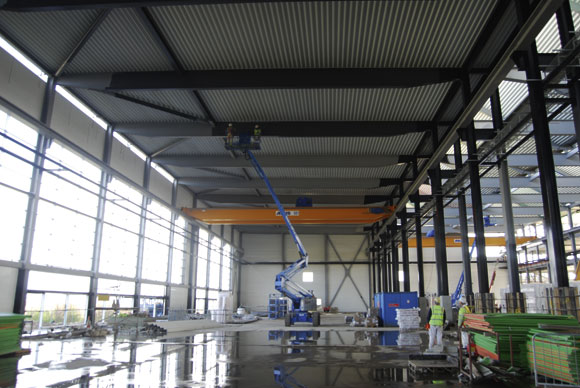