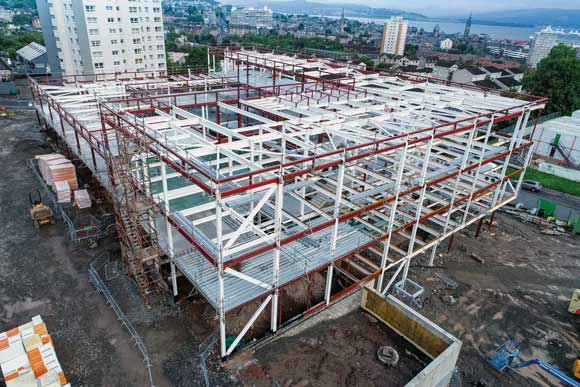 The project will aid the regeneration of Greenock

A steel-framed solution has provided a new health centre with a future-proofed flexible design and the desired clear spans. Martin Cooper reports from Greenock.

The £21M centre, located on the site of a former academy, will bring together four existing GP practices, district nurses, health visitors, dental and podiatry departments and a number of out-patient clinics, alongside a community café.

Hub West Scotland Chairman John Brown says: “The current facilities at Greenock Health Centre are out-dated and not ideal for the provision of modern health and social care services.

“We need accommodation that helps us deliver services where there is an emphasis in delivering more care outside hospitals and in local communities.

“Therefore, the new purpose-built centre has been designed to be much more than a simple replacement of the existing facility. It has the potential to bring together the key elements from a range of professions to tackle health inequalities, improve health and contribute to social regeneration.”

Including ground floor, the steel-framed centre is a four-storey structure measuring approximately 60m x 50m. Its stability is derived from cross bracing, predominantly located around stairwells.

Most of the floors have very few internal columns, thereby providing the clear open-plan layout that the client wanted. The longest beams are 11m, and the steel members support metal decking to form a composite flooring solution.

“A steel-framed solution was chosen not just for its spanning qualities, but also because we wanted minimal internal columns to provide a flexible design whereby partition walls can be moved in the future if room sizes need to be reconfigured,” explains Hoskins Architects’ Alastair Cassell. 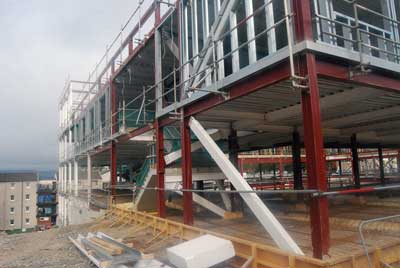 Bracing is located around the stairwells 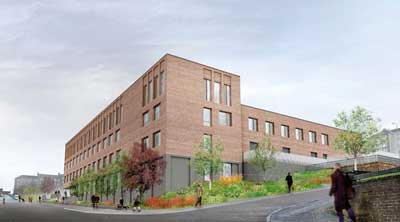 The footprint of the building incorporates a sloping site

This large nearly square-shaped building is also arranged around an open centre, which will accommodate an inner landscaped courtyard.

The courtyard, like the building will be stepped, as the entire site slopes from north to south and from east to west. From the south-east corner of the overall site to the north west corner, there is a 15m drop in ground level, while the gradient within the footprint of the building is 7m from south to north.

The severe topography of the site meant the project needed an extensive groundworks programme, which included the construction of a retaining wall that extends around the majority of the building’s footprint.

Further highlighting steelwork’s flexibility, BAM Assistant Site Manager Lewis MacMillan says: “We got most of the retaining wall constructed before the steelwork erection started, as many of the columns are founded on the wall.

“However, in some areas we had to leave steel ground beams out, in order to complete the groundworks. These beams did not affect the overall stability of the frame, and so they were installed later in the programme.”

As well as the retaining wall, the groundworks also included the installation of the frame’s foundations, which consist of pad foundations and concrete mass-fill to the rock below.

The sloping site also affects the building’s floor levels, as along the main northern elevation the structure reaches the maximum four-storeys high and also includes a small basement area. However, along the east and west elevations, the ground floor can only extend along one-third of the structure’s length, before it has to end at the slope’s retaining wall. Consequently, this means the first floor is at ground level along the back (south) elevation of the building.

Adding some more variety into the design, the north and most of the eastern elevations both incorporate the maximum four levels, while the other two sides of the building are only two-storeys high. Because of the slope and the lack of any ground floor along the back elevation, the building only needs to step down one floor level in this area to incorporate the two storeys.

Commenting on the project’s challenging ground conditions, Hescott Engineering Director Chris Scott says: “The erection of the steel frame was difficult due to the sloping nature of the site. The difference in level between the lowest base and the highest base is quite significant and consequently, steelwork loads had to be scheduled to suit where the cranes and MEWPs could be positioned.”

An access road behind the centre and a large laydown area on the eastern side, which will eventually form a car park, provided Hescott its main positions for its cranes during the erection programme.

The standout feature of the centre’s steelwork is probably the first part of the building most visitors will see. The entrance features a propped cantilever that creates a column-free way in with a glazed screen set 3m back from the column line.

This cantilever is formed by a transfer structure comprising two 356 × 406 × 634 UC beams that are positioned at first floor level and support the three levels of structure above.

“Steel’s high strength-to-weight ratio and versatility gives us as engineers so much more freedom to achieve ambitious designs. Through being both light and strong it allows for long spans and open, column-free spaces that just aren’t possible with a lot of other materials.

“On top of this, it’s highly economical and as its fabricated offsite it can be brought in and rapidly erected, which helps speed up the construction process. The majority of our structural designs now are in steel as it just offers so much more.”

The New Greenock Health and Care Centre is due to be complete by August 2020.