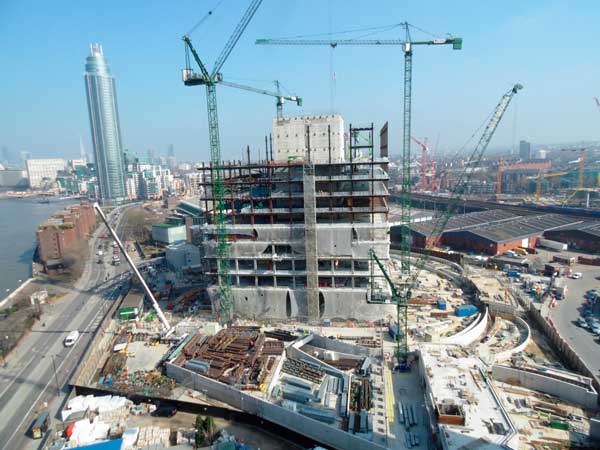 Steelwork erection for the new Embassy of the United States of America is taking shape on London’s south bank.

The steel-framed structure is being built by a US/British joint venture between B.L Harbert and Sir Robert McAlpine. Approximately 3,000t of structural steel is being fabricated, supplied and erected by Severfield, with a further 900t of steel sourced by the project team via the USA.

Stability for the building is derived from a large centrally positioned core that also absorbs structural loads transferred via the floor slabs. Spans within the building are generally long – between 15m and 18m in length – producing a predominantly column free interior.

Designed by US-based architect Kieran Timberlake, the Embassy building will be a glazed structure with an outer scrim of ETFE cushions.

The façade will be orientated to provide shade, minimise heat absorption and protect the building from external environment while acting as a thermal buffer.

The project has been funded entirely from the proceeds of the sale of other US Government properties in London, including the present embassy in Grosvenor Square