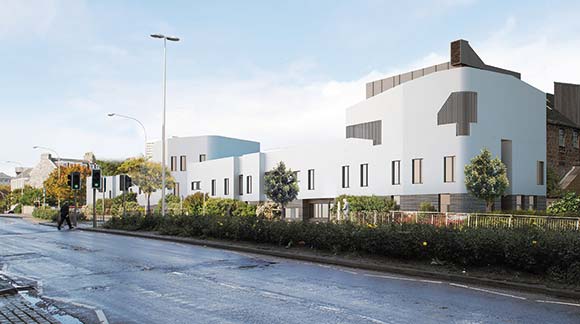 The facility will centralise many of Aberdeen’s healthcare services

Criteria such as the size, shape, multiple uses and a constrained site all lead to a steel framed solution for a community health centre in Aberdeen.

A wide range of health care services in Aberdeen are being brought together within one large city centre building. Known as the Community Health and Care Village, it will accommodate a range of services in an accessible location to support people who will be able to remain independent within their own communities.

Described as a hospital without beds, the centre will include departments for minor surgery, dentistry, radiology, sexual health services, physiotherapy, dietetics, speech and language therapy, as well as careers advice and information.

With such a variety of uses to be accommodated within a single highly flexible, three level 17,251m² structure, steelwork was always going to be the framing material of choice. 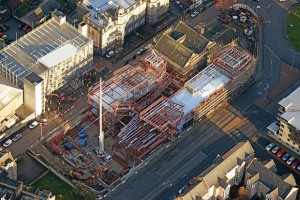 “The structural grid pattern is very irregular because of the different sized surgeries and waiting rooms,” explains Jim Hanna, Miller Construction Senior Project Manager. “While in the basement there is a car park which has a unique grid layout.”

Framing the building with any other material would have been problematical, not just because of the structure’s complicated internal layout, but also because the external elevations feature a number of architectural curves.

The construction site is also surrounded by busy roads and has very little space for materials storage. Deliveries to the project have to be made on a just in time basis, which is something ideally suited to steelwork which can be unloaded and erected immediately. Access to the site is also restricted, and delivery loads are limited to a maximum length of 12m.

“As well as the design issues which pointed us towards the use of structural steelwork, the material seems to be the framing material of choice across Aberdeen. Contractors prefer it and have a lot of experience with it,” explains Kieron Browne, Fairhurst Project Engineer.

Because of the nature of the intended usages within the structure, such as clinical operations, vibration was an important design consideration and the stringent vibration standard required for hospitals had to be met. Compliance of the steel floor plate was demonstrated using the methodology to calculate vibration response given in SCI’s guide P354.

Construction started on site during the summer of 2012. Main contractor Miller Construction had some demolition work to carry out, although most of the site had previously been cleared and was being used as a car park.

The site was piled and the basement car park, which occupies approximately half of the building’s footprint, was excavated to a depth of 5m. A large concrete retaining wall was also installed across the site, separating the deeper car park zone from the half of the building without a subterranean level.

Successful coordination between various trades is crucial to project delivery, and steelwork contractor BHC liaised closely with the groundworks team during the initial stages of the steel erection programme.

“Work on the basement was on-going when we started the steel programme,” says Bobby McCormick, BHC Project Manager. “This tied up half the site and meant we had to phase our work around the groundworks.”

As steel erection progressed the available onsite space quickly disappeared, and this meant only one mobile crane could be accommodated. Early in the programme BHC used a 25t capacity unit to erect the steel. This had to be upgraded to an 80 tonner later in the programme when a longer reach and capacity was needed for off loading and erection.

“Early on we had the crane positioned on ground level, but for the second half of our programme a bigger crane was needed as it had to be located in the basement,” says Mr McCormick.

The initial part of the steel erection involved the construction of a ground floor and first floor accommodating consultation rooms and a second floor which consists of office space and plant areas.

This segment of the health village wraps around and connects to a retained Nineteenth Century granary building. Having been renovated, the building is currently being used as the project site office and has been earmarked as a possible extension for the health facility.

Works for the project are due for completion by the end of 2013.

Transparent design in the frame 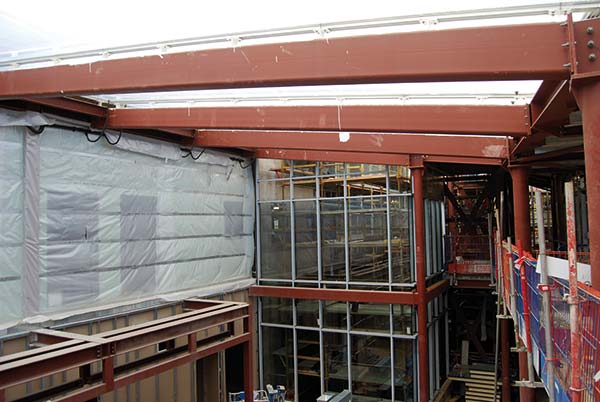 The centre is formed with a steel frame which gains its stability from braced lift cores and K-bracing located in partition walls and above perimeter windows.

The grid is highly irregular, based loosely around a 7.5m × 10m pattern in the basement car park, and then changing above to 7m x 6m for the surgeries and offices. A number of transfer structures are located above the car park to accommodate the larger open plan courtyards and atrium.

“Steelwork helps create the shape and the various complex elements and areas within the building,” says Graham Miller, JM Architects Project Architect. “The concept behind the project is for a village scenario, with the different services arranged around open courtyards and a large main entrance with an atrium.”

Transparency within the centre is achieved with an abundant use of glazed partitions and fully glazed footbridges which span the open courtyards.