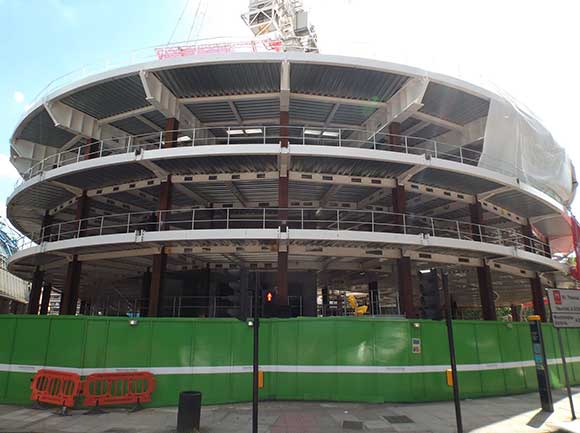 Long internal spans and a lightweight roof structure were the reasons why steel construction was chosen for a prestigious student accommodation and college project in London.

Located next to County Hall and Waterloo Station, 199 Westminster Bridge Road overlooks the River Thames affording views of the Houses of Parliament and Big Ben.

Designed by architects AHMM, the hybrid scheme will deliver 1,092 rooms in a variety of formats including bedsits, two bedroom units and larger four bedroom duplex flats. Student accommodation is spread over 16 levels from floor three to the uppermost level 18. 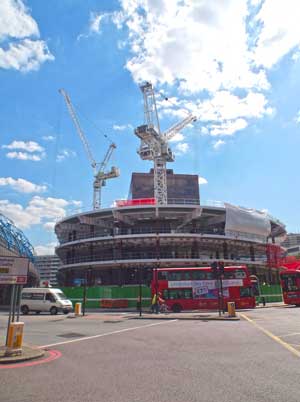 Deep trusses on the third floor support the residential tower 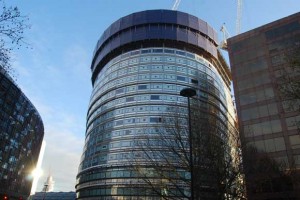 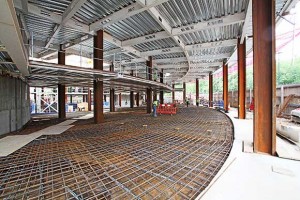 Level three of the scheme is essentially a transfer deck and the most crucial element of the project design as this is the main interface between the reinforced concrete residential zone and the steel framed college below. Level three also supports a private roof garden that will only be accessible to residents.

From basement level up to the third floor structural steelwork with metal decking has been used as the framing material and Bourne Steel fabricated, supplied and erected 1,570t of steel for this part of the scheme.

Steel was chosen for the college as the design includes a number of long span areas, such as a large central atrium.

“These areas are much easier to construct with steel,” adds Balfour Beatty Senior Project Manager Geoff Grant. “And using steel for the college also means the classrooms have more in-built flexibility.”

Bourne Steel’s erection sequence has been split into two programmes. Initially the company erected the bulk of the project’s steelwork from basement slab up to third floor transfer level during a 12-week period in early 2014.

Currently Bourne is working on a return visit to site erecting a further 80t of hot rolled steel to form the project’s sloping roof (see below).

As busy roads and railway lines surround the site logistics and planning played a key role in the erection programme. With little room for material storage as the structure takes up most of the site’s footprint, all of the steelwork had to be delivered on a just-in-time basis.

“We delivered about 25t of steel to site each day and with space at a premium and no room to position a mobile crane, all of the steelwork for the lower levels was erected by the two on-site tower cranes,” says Bourne Steel Project Manager Iain Griffiths.

The basement contains the initial elements of steelwork to be erected. This area contains a plant mezzanine formed with 3.5m high steel columns supporting metal decking, while longer 7m columns in the basement support the reinforced concrete ground floor slab.

From ground floor upwards the scheme’s steelwork zone incorporates a central atrium around which the college’s mezzanine, first and second floor facilities are arranged.

“Typically college floors are formed from a composite steel frame construction with concrete slab on profiled metal decking, while stability is provided by the cores and an additional stair core that runs from basement to third,” says Ramboll Project Director Mitesh Patel.

Most of the steel beams are designed as downstand beams acting compositely with the slab above. Shear studs welded to the top flange of the beams provide the required composite action.

However, there are a few areas of the building where composite construction was not suitable as Mr Patel explains. “Around the building’s perimeter and the internal atrium, primary beams are required to cantilever out from the columns. These beams are designed as non-composite as the top flanges will be in tension under hogging action.

“To ensure the internal spans still behave as composite sections all the moment from the edge cantilevers (both internal and external) are taken by the columns with pinned connections between the column and internal primary beams.”

At first floor level, hangers are used to support areas of the mezzanine below where there a large cantilevers or long internal spans. In these instances, the depths of the beams were increased so that the top of the steel is level with the top of slab and this then acts non-compositely but fully restrained.

At mezzanine level, due to restrictions on the structural depth, all beams sit within the slab level and are designed as non-composite.

The largest sections of steelwork to be erected were a series of fabricated plate girders, up to 22m long and weighing up 19t each, which spans the college’s central atrium and forms the third floor transfer deck.

“The project needed a transfer structure at this floor level as an entire row of concrete columns are removed necessitating the use of deep fabricated steel beams to transfer the load back to the steel columns below,” says Mr Patel.

All transfer beams at this level are at the same level as the top of the slab and designed as non-composite. Typically, the transfer beams cantilever out past the perimeter steel column below, picking up the full length of the concrete column above and supporting the cladding line on the building perimeter.

The scheme is scheduled be to completed and ready in time for the start of this year’s autumn term.

A sloping steel roof structure, designed with sightlines of the Houses of Parliament in mind, tops the building and incorporates the uppermost residences.

Slightly longer spans are required for this floor and so a lightweight steel solution was chosen. Steel decking forms the roof itself and spans between steel beams providing them with lateral restraint. The roof beams are also designed to support a green roof.

Two cores provide stability along with two sections of vertical cross bracing at the ends of the two ‘wings’. Horizontal cross bracing is provided at roof level to ensure the frame can span between the various vertical stability elements.

Several of the studios at level 18 contain duplex-style sleeping decks. These sleeping decks are designed as lightweight timber structures spanning between the room partitions.

“Getting the steel to the top of the building has been a challenge as we have 800 pieces of steel to erect,” says Bourne Steel Project Manager Iain Griffiths. “In order to reduce the number of crane lifts we’ve invested in two 3.5t capacity lifting cradles to enable the cranes to hoist a number of steel sections in one lift.”