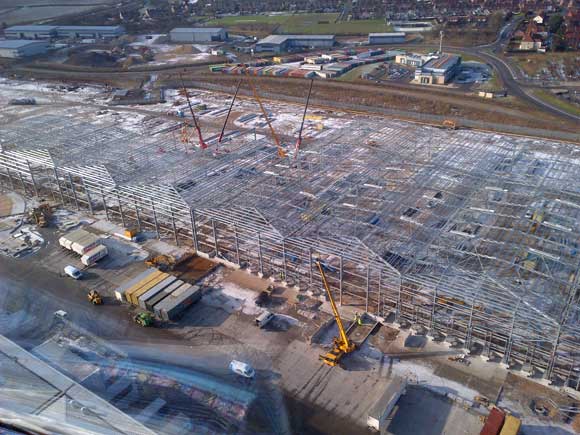 The large warehouse, at the former colliery site, takes shape

The only viable option for Sports Direct’s new distribution centre was a steel framed solution.

Sports Direct already has a presence on the site dating back to 2005, and this new retail/distribution centre has a footprint measuring 300m × 150m and a height of 12.5m to the underside of the eaves.

A two-storey high 30m-long bridge structure will span a service yard and link the new structure with the existing facilities, creating a combined distribution centre with more than 90,000m² of floor space.

The new structure consists of a series of portal frames, with spans of up to 34.5m wide on an 8.5m grid.

“Steel portal frames are the only viable solution for this project and offer an economical solution to carry a lightweight roof for industrial building applications. This is a tried and tested solution for this type of facility,” says RPS Associate Scott Harrison.

The varying spans of the project have been coordinated with the client’s proposed fit-out and the Shirebrook site constraints. 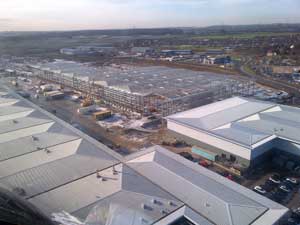 The project has been split into three fire-rated chambers with structurally independent portal frame structures to safeguard the business in case of a fire. These interlinked sections are known as C1, C2 and C3 (see diagram on opposite page) and all accommodate three-level cross-dock mezzanines.

“Consideration had to be given to Severfield’s programme to allow the mezzanines to be constructed early in the construction programme,” adds Mr Harrison.

The C1 section of the project is purely a distribution area and consists of eight spans of up to 33m with 17 column bays spaced at 8.5m centres.

C2 is also a distribution zone with four portal frames with spans up to 35m wide, but it also accommodates three levels of offices housed within two smaller 24m wide portals. Large trusses have been used to form the office zones as they span over a recessed dock area, and the steelwork needed to be protected against the potential for vehicular damage during the operation of the busy dock area.

Finally, the interlinked C3 sector is orientated in an east-west direction to suit the site, as opposed to the other areas that have their spans running in a north-south direction.

All three sections contain three levels of 16m-wide mezzanines and these floors, along with the offices in C2, have been constructed compositely with steel decking.

The need for bracing to maintain structural stability cannot be designed out, says Mr Harrison. However, bracing locations have been designed with due consideration to building operational requirements.

Severfield is fabricating, supplying and erecting 3,700t of steel for this job. All columns arrive on-site in single pieces with the majority being 610 × 350 members. The portal frame rafters however arrive on-site in two sections that are bolted together on the ground before being lifted into place.

“Steel erection is being undertaken during an 18 week programme,” says Severfield Project Manager Bill Armstrong. “To complete this schedule we have up to eight cranes working on-site doing four spans at time.”

Summing up the project, Winvic Project Manager Jason Bright says: “This is a fast-track project and steelwork’s speed of construction has helped us achieve our objectives on what is a very busy site. The logistics of bringing materials onto the site are also challenging and need to be scheduled in advance as we are situated next to Sports Direct’s existing facility.”

The portal frames are built on reinforced concrete pad bases on the dynamically compacted remediated colliery site.  Special attention had to be given to the site’s backfilled former coal workings that contain a mixture of mudstone sand and clay. A large reinforced concrete raft has been designed for one area of the project that could not be accessed for ground treatment.