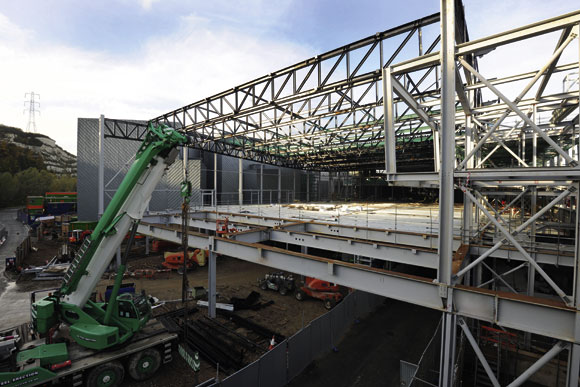 Steelwork including long span trusses have been used to create the necessary open plan areas for the latest visitor attraction at Bluewater in Kent. Martin Cooper reports.

The construction of the £60M, 5,200m² exhibition and events venue, is set to boost the prestige of one of Europe’s largest retail and leisure destinations. As well as increasing the reasons to visit – Bluewater already boasts 330 shops, 50 bars and restaurants, 50 acres of parkland, seven lakes and attracts 28M visitors a year – the venue will become a focal point for leisure and entertainment in the area and further stimulate the ongoing regeneration of this part of Kent.

The development, by Lend Lease, includes a 3,000m² plaza, 4,000m² of restaurant space and will be integrated into the existing retail area via an entrance on Bluewater’s main mall.

The close proximity to operating retail outlets and restaurants has meant the construction team has had to make a concerted effort to limit the noise and impact the project has on the general public.

Compounding the challenge, the site as well as bounding the existing shopping mall, is also situated between a 13-screen cinema and a functioning three-level car park. 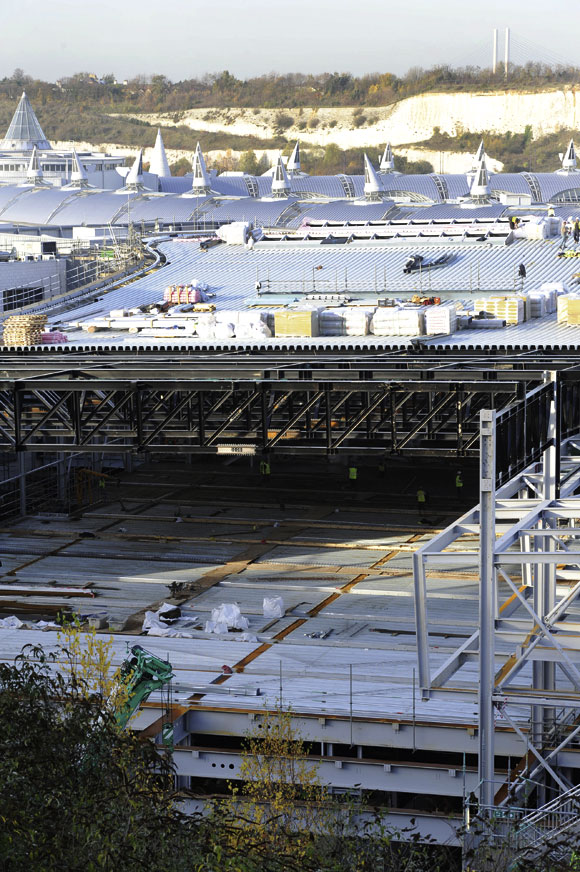 A combination of bracing and moment frames give the venue stability

“We’ve managed to keep the noise levels to a minimum by doing the noisiest work, such as cutting rebar and metal decking, before 10am,” says BAM Construction Project Manager George Cuttle. “While the steel erection around areas abutting existing buildings has also been done before the cinema or retail zones have opened.”

The venue is approximately 120m long by 46m wide. An area adjoining the existing mall will contain the entrance and the large open plaza, which will also house some restaurants. Extending outwards from the plaza and occupying nearly two-thirds of the footprint there are two exhibition halls. The lower or ground floor hall is slightly smaller than the first floor hall, as this hall shares its footprint with a service road running along one elevation.

The lower hall has a 5m floor to ceiling height, compared to an average of 12m for the upper hall. A series of 18m long plate girders were erected to form the main span for the lower hall. A notable feature of this hall is the intermediate columns that help span the service road and two outer grid lines.

There are no internal columns in the venue’s larger first floor hall (which sits directly above the ground floor hall). Here a series of ten roof trusses, up to 38m long and 2.7m deep, have been erected by Robinson Steel Structures to form the required open plan area.

These trusses were brought to site in three sections and lifted into place by two mobile cranes. One crane was used to lift two truss sections, which had been bolted together on site, while the second crane lifted the third section. Once lifted into place, the final bolting up was done while the two truss sections were being held aloft by the cranes.

The first trusses to be erected were the members closest to the new entrance area, abutting the existing shopping mall. In this way, Robinson was able to proceed with its steel erection working away from the mall and consequently always leaving room for its cranes.

“The first large truss to be erected was temporarily braced for stability, and not until two grid lines of trusses were up could the bracing be removed, as only then was the main steelwork frame self-supporting and stable,” says Peter Mills, Robinson’s Project Manager.

Further steelwork has been erected into the larger upper hall, as it also contains two mezzanine levels, which will be used for plant equipment. 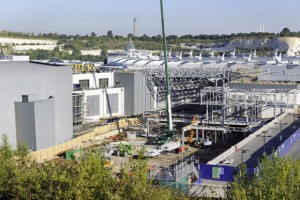 The venue is sandwiched between a cinema, a car park and the existing mall

Overlooking the upper hall, a VIP suite or gallery beam has been created by erecting a 50m long by 5m wide steel box which bisects the entire venue. Supported on columns, this mezzanine-like level protrudes from either side of the building as an architectural feature.

Stability for the steelwork is derived from moment frames within the plaza area, and here the extra loadings associated with such a large open space have been accounted for by large plate girder columns. Further down the structure within the halls, the steelwork has vertical bracing for stability.

Topping the venue is a curved roof, whose two troughs and hillocks culminate at a bullnose feature. The bullnose is hung from a roof truss and blends into a curved wall which slopes downwards and stops 5m above ground level. Beneath this area the venue’s service yard for trucks is located.

This complex curved wall of steel has been erected from nine steel tubular ribs which have three splices each to account for the structure’s curvature. The bullnose is braced in two directions; vertical bracing for snow loading from above and horizontal bracing for wind.

The venue’s roof will eventually have a green sedum covering, at 3,000m² it will be one of the London areas largest. This late environmental addition to the project’s design meant the steelwork had to be altered in order to accommodate the extra loadings.

“The original steelwork design had to beefed up to accommodate the green roof,” explains Naresh Tailor, Engineer for BAM Design. “Most of the section sizes had to be increased in particular the long span trusses located over the first floor hall.”

The final phase of the steelwork programme begun in January. This entails punching through the existing glazed wall and connecting the new venue into the mall. Here in Bluewater’s Water Circus, Robinson will connect the new steelwork to the old and create the venue’s entrance area.

“The interface between the new development and the shopping centre is critical,” sums up David Amaku, Lend Lease Site Representative. “We’ve managed to successfully limit the project’s impact on the public and the construction of the entrance is being coordinated around functioning restaurants, most of which will remain open for the duration.”

The Events Venue at Bluewater is scheduled to be completed in October and will open in late autumn. 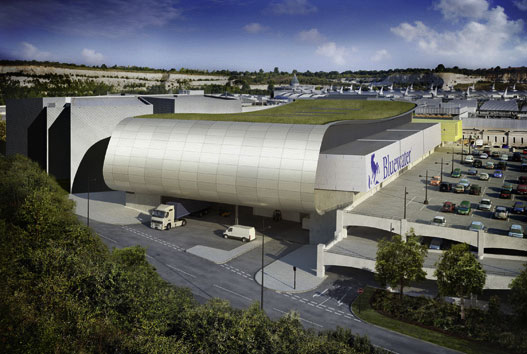 The Bullnose façade of the Events Venue