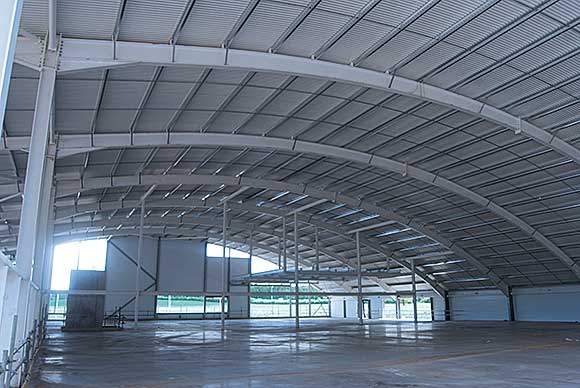 A new leisure club in Worcester is taking advantage of steelwork’s flexibility and long span qualities.

The sport and leisure sector has consistently been one of the better performing areas of construction over the last few years. Whether it has been investment in new facilities by cash rich professional sports clubs or councils building municipal leisure centres, there has been a healthy level of projects.

A company in the leisure sector which has invested in numerous new sports, health and leisure clubs in recent times is the David Lloyd Group. It currently operates 80 clubs in the UK, most of which are steel-framed buildings. 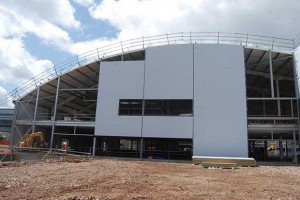 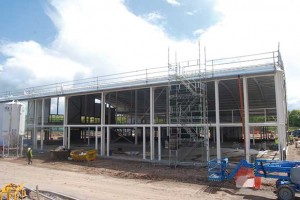 The annexed single storey area will contain one tennis court, plus the bar and restaurant 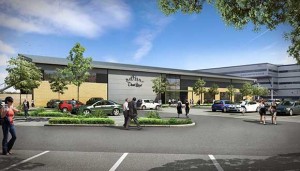 There are plans for further developments in the area; a hotel next to the centre has been mooted

There are further expansion plans ahead and David Lloyd Leisure is currently constructing a new facility in Worcester. The 5,600m² development is located adjacent to Sixways Stadium, home of Worcester Warriors Rugby Union Club, and will include an array of indoor and outdoor sporting facilities.

Main contractor Pellikaan and steelwork contractor James Killelea have all worked on a number of David Lloyd projects before, and agree that steel is the most cost-effective construction method for these jobs.

Mike Dewar of Dewar Associates agrees, and says: “Over time the team has devised the most economical way to design and construct leisure centres for David Lloyd. Steel construction lends itself to the necessary speed of construction and the long spans required for indoor sports halls.”

For the Worcester centre the design consists of a two-storey structure with an asymmetric curved roof which allows sufficient space for three internal tennis courts – two of which are on the upper level along with a 900m² fitness suite. The ground floor accommodates a 25m swimming pool, entrance bar and restaurant, a children’s pool, a sauna and changing rooms.

The structure has a 56m × 52m rectangular shape with a smaller 17m × 8m section added to one elevation. Using structural steelwork for the building’s frame, long span rafters create the roof which continues its shape when spanning this annexed section of the centre.

The upper floor is constructed of a 150mm thick concrete slab supported from steel beams spanning on to columns generally on a 7.2m × 5.3m grid pattern. There are some exceptions to this pattern; the adult swimming pool requires a clear span of 16.6m, while the sauna and children’s pool area also needed longer spans.

“A steel deck slab is utilised for the upper floor which has allowed the steel beams to be designed compositely,” explains Mike Dewar of Dewar Associates.

Speed of construction – one of the main reasons for choosing steel – is an important criteria on this project as the centre is scheduled to open in December. Steel erection was completed in just five weeks and contractor James Killelea’s Project Manager Bob Allan says the overall timescale was a challenge: “We only had five weeks to design and fabricate the steel. However we’ve done similar David Lloyd projects and this helped us.”

As time was of the essence the fabrication of the steelwork was being done while the early preparatory works were being carried out on site. The project is located on a former car park which needed to be cleared before a culvert was diverted and pad foundations installed in readiness for the steel erection.

“Once steel was on site the main frame went up quickly and on schedule, which meant we could then get the roof on and let all the follow-on trades get started,” comments Mark Allen, Pellikaan Project Manager.

James Killelea sequenced the steel programme and erected the annexed part of the structure first. Once this portion was completed, it was self supporting and allowed the company to begin work on the two level part of the project.

The entire structure derives its stability from bracing located on both floor levels in an east west direction combined with a sway frame in the north south direction.

The building is braced against lateral loads by utilising the first floor slab as a diaphragm transferring the loads back to the braced bays on the structure’s perimeter. The upper storey is portalised in the long span direction with continuous columns at first floor level to ease the erection logistics.

James Killelea used one 50t mobile crane to complete the steelwork programme. The largest lifts were the main long span rafters and these were brought to site in two parts before being spliced together and lifted into position as one complete member.

The building has a maximum height of 13.6m so columns were able to be brought to site as complete pieces, which helped with the quick erection programme as less on site bolting was needed.

Summing up the project Jason Andrews, David Lloyd Leisure Regional Director, says: “We are very excited about coming to Worcester and providing the community with what will be a fantastic club.”