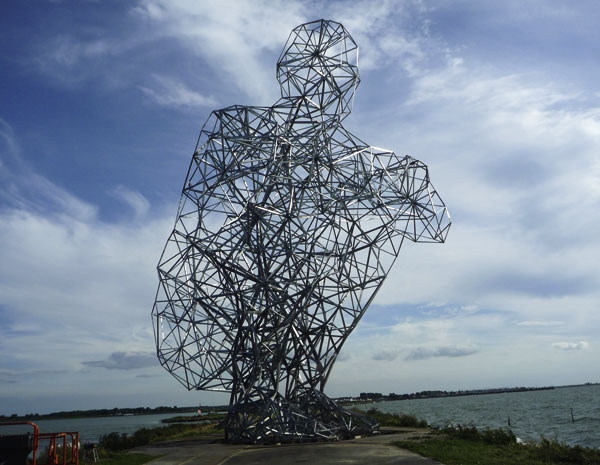 A complex arrangement of hundreds of galvanised angle sections form a steelwork sculpture inspired by an artist’s own crouching body.

A remarkable structural sculpture, say the judges and one which became a ‘labour of love’ for the whole project team.

The sculpture, based on Antony Gormley’s own body, was designed in collaboration with Cambridge University and Royal Haskoning in The Netherlands. This design was then transferred directly onto Had-Fab’s Tekla software package for detailing.

Had-Fab says it has many years experience of producing complete structures, fixtures, fittings and towers for power and telecommunications. However, with a project as complex as this one a web viewer tool was essential to provide the structural engineers with 3D details of the nodes, so they could confirm that the construction met their design requirements.

“We’d been in contact with Mr Gormley discussing this project for about five years,” says Had-Fab’s Managing Director Simon Harrison. “Numerous companies were initially contacted by him to produce the complex steelwork but most refused the job after completing feasibility studies.”

The sculpture is constructed entirely from steel angle profiles with every single one a different length and produced from sections varying in size from 60mm × 60mm up to 200mm × 200mm.

It is made up of 547 nodes, the largest of which were known as the ‘heart’ node, weighing some 280kg and the ‘brain’ node, which weighed 56kg. “Producing these 2.5m diameter nodes was extremely time consuming as some of them had 29 angles meeting together to form locating points around the structure which had to be bolted and welded into position,” explains Mr Harrison.

The total weight of the steel structure is 60t, but this conservative total required 32,000 holes to be punched or drilled in the angle profiles.

The completed structure was trial erected at Had-Fab’s facility following the hot dip galvanizing process of the 5,000 elements. The structure was then disassembled and transported to Lelystad and erected two weeks ahead of schedule. It needed approximately 17,000 nuts and bolts to complete the final assembly.

“This one-off structure epitomises the way software, machine technology and manual fabrication techniques can work together,” sums up Mr Harrison. “The challenges of the design, detailing, equipment performance and fabrication were extensive.”