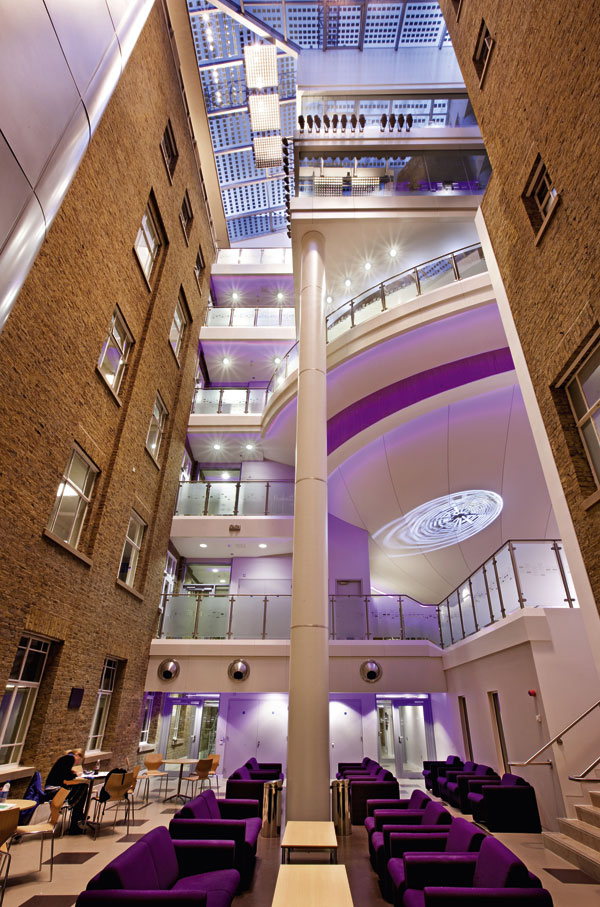 Enhancing a Grade II listed building, this project’s design includes a contemporary research, learning facility, housed within a large redundant courtyard. The architecture aims to maximise the use of space, while retaining the character of the original courtyard and the quality of the light to the surrounding building.

The job involved the demolition of the existing 1920’s lecture theatre situated in the middle of the courtyard and the insertion of a new structure rising five storeys, surrounded on all sides by top-lit atria.

The building is steel-framed with precast hollocore planks to maximise thermal mass and reduce onsite construction time and disruption to the school. The main lecture theatre is supported by deep trusses within the theatre walls, which span between the building’s primary columns. Edge members and steel frameworks were introduced at the atrium roof level to enable connections directly into columns and standardise connections where possible. 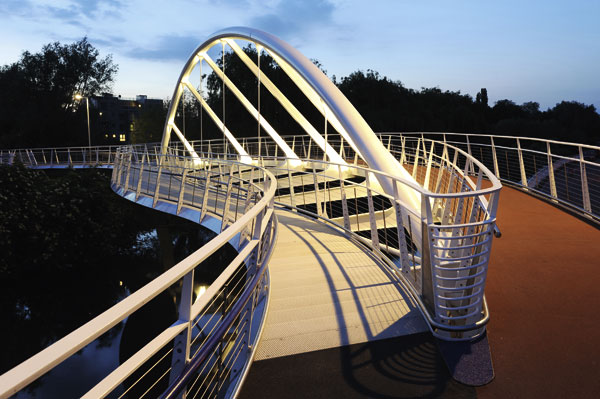 The first new bridge in half a century to be built on Cambridge’s famous Cam River, this structure provides a pedestrian and cycle link from the town centre to a newly developed housing area on the north bank.

The bridge rises in a gentle ramp over a floodplain on the north bank, sweeps across the river, then sweeps through a 90 degree angle to connect with a road running along the southern bank. The flowing curve of the bridge deck responds to the natural meandering of the river. With no sharp turns, steps or gradients steeper than 1 in 20, it is fully accessible for all users to enjoy. The arched form is well suited to the constraints of the site since it allows a very slender deck, minimising the length of the approach ramp which is needed to achieve the specified clearance of +3.6m over the river.

Steel hangers, suspended from the bridge’s arch, support the pedestrian deck while wishbone steel elements support the wider cycle deck. Rigorous analysis went into tuning this geometrically complex form to achieve the most streamlined, stable structure possible. Four tuned mass dampers are incorporated within the deck structure to mitigate dynamic oscillations, enabling the overall mass to be minimised and driving costs down.

Constructed using largely recycled steel, the new bridge was conceived as the centrepiece for the local sustainable transport strategy. It improves and promotes cycling across the Cam and creates a new route that widens user access. 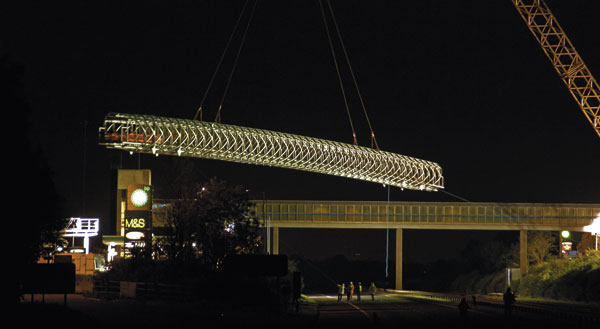 The M8 Harthill footbridge is a landmark structure situated approximately halfway between Edinburgh and Glasgow, crossing Scotland’s busiest motorway.  Connecting the M8 Motorway’s first ever service station to the town of Harthill, it replaces an existing overbridge that has fallen into a state of disrepair.

The main span is 90m in length and supported by four slender ‘V’ supports. The helical diagrid provides the shear transfer between continuous top and bottom chords allowing it to act as a deep composite section. Circular hollow sections were used for all primary steel members of the bridge and detailed structural analysis allowed each to be optimised, although the steel thicknesses varied through the span.

With the main span being formed of prefabricated tubular steel, a similar system for the approach ramps proved to be the most cost effective option. They were fast to erect, maximised spans through the use of lightweight performance materials, improved the quality of the end product and minimised the need for temporary works.

The innovative steel helical truss design of the footbridge offers many benefits. The open framework results in elements being primarily in tension or compression, to create a very light but stiff form of construction – facilitating a speedier installation programme. 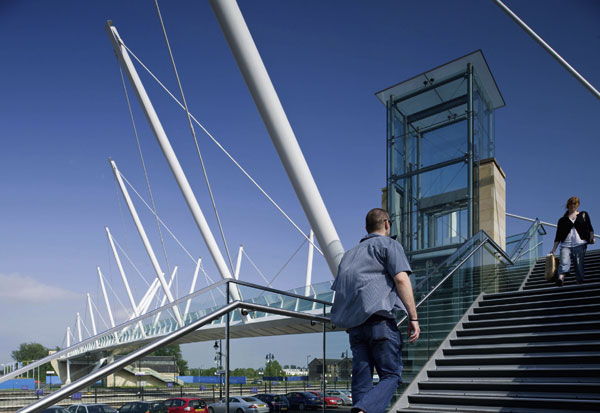 Stirling’s new footbridge provides a key pedestrian crossing linking the city with the Forthside development acting as a catalyst for a long term redevelopment plan.

The bridge is a three span structure of 113.4m, with a main span of 88.2m, crossing seven rail lines in close proximity to Stirling Station, its car park and the feeder road to the new Forthside development. Steps and panoramic lifts provide access at each end.

By using a steelwork superstructure, with substantial elements fabricated and finished off-site, the impact of the construction operations were controlled and disruption minimised.

The bridge is an unusual structure based on the principle of an inverted ‘fink’ truss but is sufficiently removed from its generic root as to be unique. Two tapered and inclined truss planes are arranged to create a twisting form. The design is such that the approaches (lifts and steps) are effectively landscape features which are offered up to a high level pier.

The bridge is a visually and structurally independent structure that connects the two approach assemblies. The defining feature is the pair of up-stand trusses to either side of the deck with steel masts with cable cross bracing but, critically, is devoid of a top chord.

Each truss is a propped cantilever with its visual and structural mass resting on one side of the railway and its diminishing form reaching across to the other; one truss reaches from Forthside to Stirling and the other from Stirling to Forthside – an overlapping and interlocking structural ‘handshake’.

Stirling’s Provost Fergus Wood said: “This iconic and unique structure will grace the skyline of Stirling for many years”. 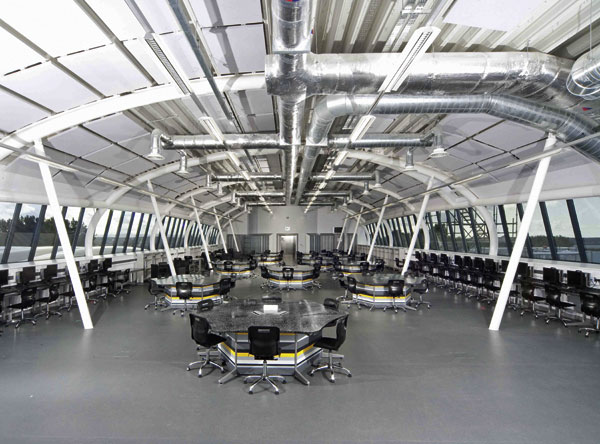 The inspiration for the central structure of the North Liverpool Academy was a classic door handle from a Jaguar car.

Separating two traditionally built steel-framed teaching blocks, the 140m-long by 15m wide  central ‘handle’ structure features a complex design that is not symmetrical about the short axis and is a floor higher than the rest of the building.

Because of the complexity, the steel erection was sequenced around its design. “Ordinarily the project would have been built north to south with the two teaching blocks and the central handle constructed as one. However, the design work needed for the handle was so involved that the two outer blocks were erected first, while the handle’s design was still being finalised,” explains Tony Foster, Wates Project Manager.

“The challenge in designing the handle was the fact that it’s curved and also skewed by three degrees on plan, which means every connection is different,” adds Nick Garcea, Atkins Project Engineer.

Primary bowstring trusses at 12m centres – all of differing length and depth – supported on oval sections form the rounded handle shape up and above a steel ribcage.

Stability for the handle is achieved through diaphragm action of the floor plate transferring lateral loads to the lift shafts at both the head and the tail ends. The connections to the lift shaft at the head allow longitudinal temperature movements. 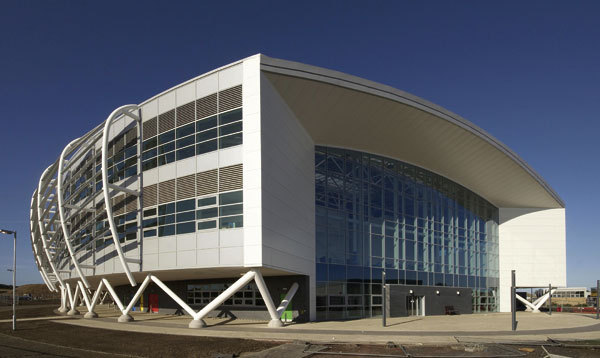 The new Monkseaton Community High School was inspired by the Exemplar Designs from the Department for Children, Schools and Families which were produced before the Building Schools for the Future (BSF) programme in 2004 as a blueprint for new schools.

Constructed on the playing fields of the old school, it provides state of the art facilities for over 900 students. Facilities include specialist ICT suites, a sports hall containing a full size indoor football pitch, two gyms, specialist teaching areas, music rooms, a recording studio, drama rooms and a number of independent learning areas. 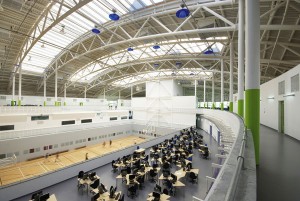 Parsons Brinckerhoff Project Leader Hemendra Goel, explains: “Visually the main feature of the school building is the roof, which covers the entire footprint and allows natural light into the heart of the structure. It’s elliptical in shape and measures 95m x 65m approximately about the major and minor axes respectively.”

As well as the large dome shaped roof, another noticeable feature element of the project is a series of 4.5m high Y-shaped columns which ring the perimeter of the structure and support the roof.

These unusual columns were initially trial erected at the steelwork contractor’s fabrication facility. Mark Page, Pocklington Steel’s Project Manager, explains: “They’re not your regular steel sections and so we decided to trial erect them, which ensured it was all going to go up on site without any hitches.”