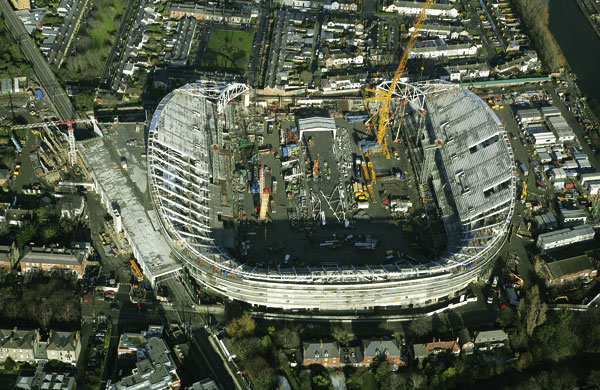 Irish international football and rugby will soon have a new state-of-the-art 50,000 all seater stadium in which to play as the multi-million pound redevelopment of Dublin’s Lansdowne Road (recently renamed the Aviva Stadium) nears completion.

Work started on site in May 2007 with the demolition of the old stadium, some parts of which dated back to the nineteenth century. More than 5,000t of structural steelwork is being erected for the new bowl and the stadium’s roof by a joint venture which includes SIAC Butlers Steel.

Redeveloping an existing stadium, as opposed to building a new venue on an out of town site, has brought a host of challenges. There are railway tracks and underpasses to the west, a culvert to the north and training pitches that had to be maintained to the east of the site.

Space for the redevelopment was created by a realignment of the pitch and by the creation of a new access podium over the railway line. The former pitches were also realigned and combined into one training pitch.

The stadium’s suburban location had the biggest impact on the final undulating roof design. The height of the structure can not overshadow the residential areas to the north. So the stadium features a 15m high north stand with just one tier of seating, this rises to 40m high east and west stands, both with four tiers and then a slightly lower south stand.

The stadium is on schedule for completion in April 2010