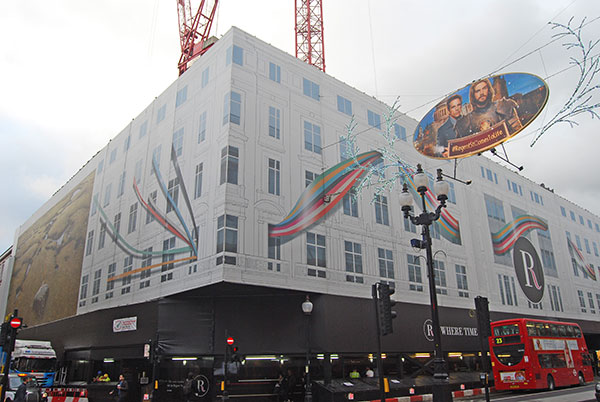 The project at 169-183 Regent Street and also known as block W5 is bounded by New Burlington Street to the south and Burlington Place to the north.

A number of interlinked buildings have been demolished to make way for a new open-plan six-storey office block that will sit above a ground floor retail zone with two basement levels.

The two main façades along Regent Street and New Burlington Street are being retained, with the latter also incorporating two 300-year old listed buildings that are being renovated as part of the overall project. The façades are protected by hoardings that resemble the completed scheme.

A steel frame is creating the new structure with Severfield erecting a total of 1,800t to complete its package. Using one centrally positioned core for its stability, the steelwork is based around an irregular grid with internal spans varying from 11.5m up to 16.5m.

Access to the site is a major challenge for the construction team, as the majority of the project’s footprint will be built on.

“Logistics and planning are key drivers on this project,” explains Mace Project Director, Steve Hawthorne. “We have one laydown area along New Burlington Street which we use for deliveries such as steelwork. Because of the lack of onsite space all steelwork has to be delivered on a just-in-time basis, which means it’s lifted off the trucks and erected straightaway.”