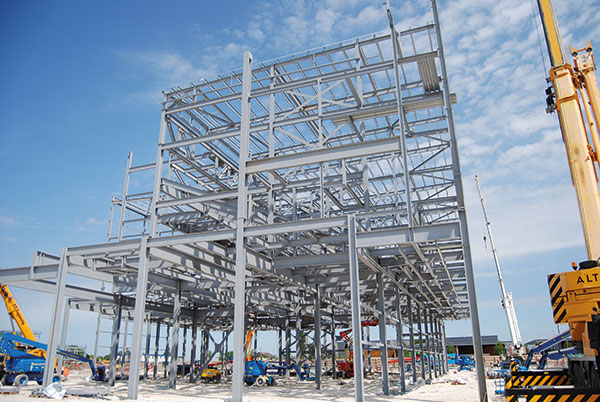 York’s professional football and rugby league teams (York City and York Knights) will both have a new home to share from next summer as an 8,000-seat stadium, including leisure and cinematic facilities, is currently under construction at Huntington on the city’s outskirts.

Main contractor Buckingham Group has value engineered the original designs for the scheme alongside Caunton Engineering, who are the design and build steelwork contractor for the job. This exercise has included a complete design review of the project’s steel frames.

A decision was made to replace precast planks with metal decking in the cinema seating areas, as it offers a more efficient build solution for the follow-on trades.

The stadium’s cantilevering roofs have also been redesigned.

“Solid UB rafters were originally going to be used, but by changing to Westok beams we have lighter and less expensive members, and ones that are tapered at no extra cost to give a more aesthetic appearance,” explains Caunton Engineering Senior Structural Engineer Richard Beesley.

Overall, structural steelwork is being used to form the entire stadium project which consists of four elements; the cinema block that adjoins the stadium’s south stand, the east stand which also includes a two-storey building housing an NHS drop-in surgery, a library and the stadium’s corporate facilities on the upper level, a leisure block that adjoins the scheme’s north east corner and includes three pools, a gym and a sports hall, and the north and west stands.