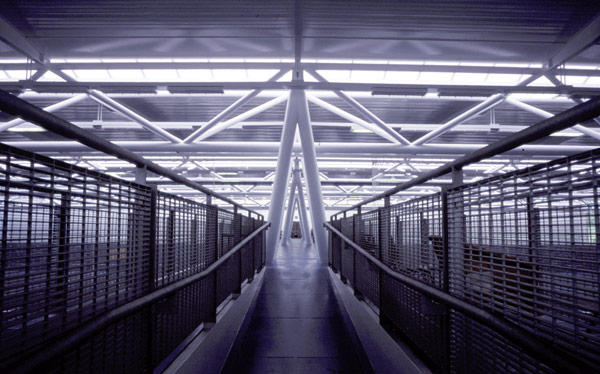 Set up as one of four regional centres of excellence for world-class athletes, the English Institute of Sport is a new elite training facility attached to the University of Bath.

“The brief was to create sporting arenas in a sensitive way,” Andrew Best, Buro Happold’s Project Leader explains. “By incorporating two generations of existing buildings into a coherent centre,” he adds.

Another key element of the design was to ensure contact between visitors and users and this has been achieved through high levels of visibility from the public gallery area into the main sporting halls.

The project consists of a series of sports specific buildings linked by a central gallery. The centre is dominated by two large steel-framed halls, one housing the indoor tennis courts and the other a multi-purpose sports hall, primarily designed for netball and badminton. 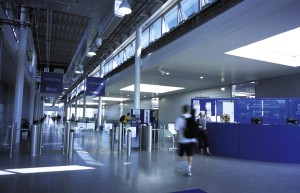 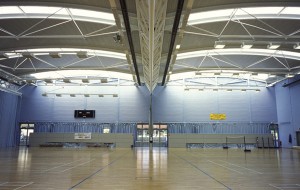 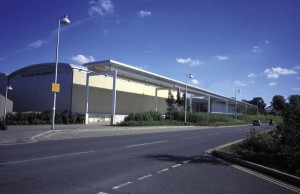 “A primary challenge was to roof over the large halls in a cost effective and aesthetically attractive manner,” Mr Best says. Each sport has a defined minimum height requirement which had to be kept free of obstructions. “Steel was the obvious choice for lightweight long span structures,” he adds.

The tennis hall measures 65m x 75m and is split into two halves, with each containing four courts. The two halves are bisected by a high level viewing gallery providing clear views over all the tennis courts.

The walkway is supported by three structural central ‘trees’ which also support the primary roof trusses at a mid-span point of 38m. “They provide stability and support the roof,” Mr Best explains.

The central trees are three dimensional lattice columns constructed from fully welded circular hollow sections. They provide the stability system to the tennis hall as they cantilever up from the foundations to give a row of lateral restraints in the middle of the hall.

Inside the halls the exposed steel trusses have been carefully integrated into the design, with the trusses being used to define zones of translucent roof sheeting and support either tennis court netting or lighting booms.

“The three longitudinal trusses were too long to transport in one piece and consequently they were welded on-site,” Leo Hernon, Midland Steel Structures Project Manager says.

Mr Hernon also comments that the roof trusses fabricated for the multi-purpose sports hall were of a complicated design. “These curved-shaped members also feature a lightweight element for hanging scoreboards and netting from, and this made fabrication a little awkward.”

At 75m long, the primary roof trusses in the tennis hall are expected to experience significant variations in length as the temperature varies in the unheated hall. Positioning of the lateral restraints centrally allowed this movement to be accommodated without locking significant thermal stress in to the structure.

Another component of the project was the steel-framed 140m-long indoor sprint track which was built alongside an existing football pitch used by the University’s side, Team Bath. The roof of the structure has been designed as a viewing terrace, while the front of the building is fully glazed and overlooks the pitch, in keeping with the openness of the project.

Sporting achievement is high in public perception, say the judges. As part of the efforts to raise national performance, this project will nurture young talent and has been carefully constructed to provide a gateway to the University campus.