Steel for joined up bridges 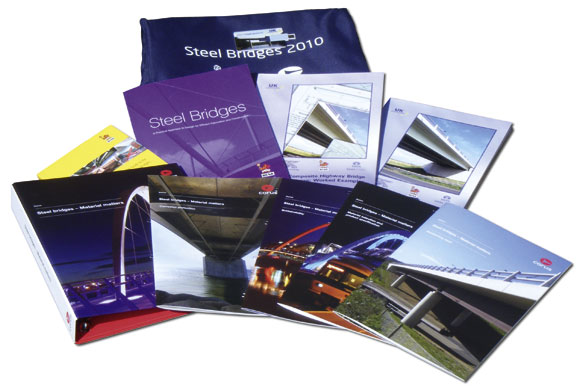 A comprehensive series of new publications was distributed at the conference

Why steel is usually the most suitable material for highway and railway bridges, footbridges and moveable bridges was highlighted at the Steel Bridges Conference in London in April. Nick Barrett reports.

Delegates at this packed event hosted by the BCSA and Corus heard successive speakers from the client side and designers describe how steel was excelling in performance and looks like continuing to be the material of choice for new road and railway structures of all sizes, including forthcoming major challenges such as the new Forth Replacement Crossing.

The conference also saw the launch of a wide range of new and updated design and other guidance for designers from the steel sector that takes account of the Eurocodes, including Composite Highway Bridge Design (SCI Publication P356) and a companion Worked Examples publication (SCI Publication P357). The Steel Construction Institute’s David Iles introduced the Steel Bridge Group’s Model Project Specification for the Execution of Steelwork in Bridge Structures (SCI P382) which is designed to facilitate the use of the new European standard BS EN 1090-2. He also announced the latest issue of Guidance Notes on Best Practice in Steel Bridge Construction (SCI P185) and explained the new Eurocodes design guidance.

BCSA launched its updated ‘Purple Book’, Steel Bridges: A Practical Approach to Design for Efficient Fabrication and Construction. This is a comprehensive revision of the previous Purple Book, the third edition of a guide originally published in 1985 and updated in 2002. A complementary BCSA Guide to the Erection of Steel Bridges was also given to conference attendees.

The tool, which will be available shortly, will be used for quantifying the embodied and operational CO2 of steel-concrete composite bridges. Mr Smith said it will be used to quantify and reduce the carbon footprint during construction and maintenance. It means the carbon footprint of steel bridges will be able to be accurately assessed and designers will have a tool to help identify ways to reduce CO2. Mr Smith stressed that the tool produces realistic results, without necessarily being based on the most optimistic assumptions, using default values.

Mr Smith said used in conjunction with new Preliminary Steel Bridge Design Charts, which were also presented at the conference, the Carbon Calculator will give steel bridge designers new, powerful and quick feasibility tools. The new design charts were commissioned by Corus and the BCSA to update the existing steel composite design charts to the Eurocodes. The scope of the charts has been extended to cover both multi girder and ladder beam decks. They now align with guidance from the Steel Bridge Group.

Mr Smith explained that the original charts were based on line beam analysis and the accuracy of the new ones is improved by using grillage models. The new charts cover a wider range of structure types, and should give greater accuracy and efficiency thanks to the more detailed analysis they make possible. They are available both as traditional charts or easy to use spreadsheets. Delegates were given free software derived from the charts to use as a quick calculating tool when preparing steel bridge designs.

Rising to the rail challenge

Steel bridges dominate the railway sector where cost effectiveness, longevity, ease of inspection for safety checks, offsite construction and ease of installation are all valued by a cost conscious industry where safety is of prime importance. Ian Bucknall of Network Rail chaired the second session of the conference which heard about new Standard Railway Bridge Designs, describing the exacting standards demanded by the UK’s railway network operator. Introducing the following speakers he said: “We will hear how steel frequently rises to the challenge.”

Network Rail’s Jason Johnston described some recent railway bridge projects using the standard designs, the development of the standard designs and the drivers behind them. Network Rail has major delivery commitments in areas such as sustainability, safety, performance, capability, capacity and availability of track and stations, he explained. Efficiencies are needed to make 21% cost savings on top of the 27% made since 2003. “We have got to do things differently if we are going to meet our targets,” Mr Johnston said.

The standard designs are intended to reduce design costs by cutting repetitive design and checking of commonly used structural solutions. Productivity will be improved by reducing the time needed to implement structural solutions, and contractor and sub-contractor costs generated by uncertainties in detailing requirements will be minimised.

A key aim is to minimise maintenance requirements and reduce the volume and cost of remedial works by adopting good practice design and detailing. Other benefits will come from streamlining the Technical Approval process. Steel bridges allow many of the key functional requirements of new bridges to be easily achieved, such as having all main structural elements visible from at least one side and easily accessed, no debris traps, water managed, easily understood structural behaviour and warning signs visible should limit states be approached.

Resistance to catastrophic failure in the event of a bridge strike is another requirement that steel delivers, as is robustness which means damage will not be disproportionate to the cause. Minimisation of disruption to rail users during installation, maintenance and other operations is also crucial for Network Rail.

Roads to the future

Steel bridges will figure prominently in plans for the future of the national roads network, as was apparent from a presentation by Geoff Bowden, Principal Structures Adviser at the Highways Agency, on National Highway Sector Schemes which are bespoke quality management schemes. They focus on quality, providing an industry benchmark. A properly trained and competent workforce is another key focus. The aim is to reduce costs and enhance quality.

Several of the sector schemes affect steelwork. For example, under Sector Scheme 19A which was revised in July last year, registration to the scheme is required for firms to be engaged in painting of steelwork on HA projects. Those wanting to be involved in steelwork for Highways Agency bridges have to prove their competence and register to Sector Scheme 20 by December 2011. Mr Bowden said clients and their agents should speak to their supply chains to ensure they are meeting the requirements of the schemes.

Neil Loudon, Highways Agency Group Manager Structures Policy/Pavement Teams, chaired the first session of the conference, outlined structures issues from the HA perspective. No longer primarily a road builder, the HA was transforming itself to be a world leading road operator. Sustainable and whole life considerations would loom large in the HA’s decisions regarding structures, which had to be cost effective, safe, efficient, durable, buildable, accessible and inspectable, maintainable, aesthetically pleasing, flexible and adaptable. 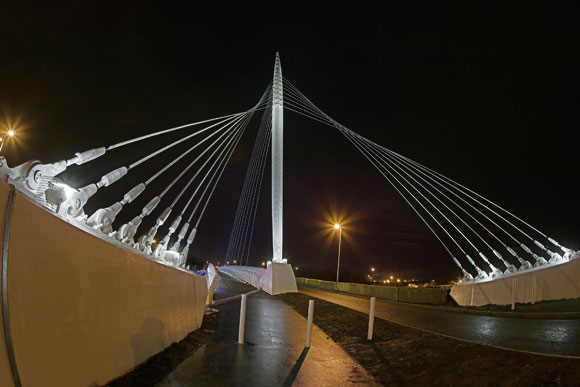 Rowecord Engineering’s Bridges Director Ian Hoppe highlighted the contribution that high profile footbridges were making to a range of communities, for example helping with regeneration in places like Newport where the River Usk footbridge is proving to be a stimulus for urban regeneration, and even providing a symbolic focus for mending barriers between communities as with the Peace Bridge over the River Foyle in Northern Ireland.

Other objectives being fulfilled by steel footbridges could be cultural, the desire for a prestigious landmark, to provide a focal point, to create cultural value. Mr Hoppe called the often iconic structures Architectural Footbridges. They differ from more run of the mill structures in several ways. For example, they are often technically more complex to fabricate, with challenging geometry. Welding challenges can be greater, erection can require a bit more thought which allows erectors to show what they can do. They involve more interfaces with other trades. Early involvement of all in the project’s construction team was crucial for their success.

“A bridge has done its job if you cross it without even noticing it,” said Mr Hoppe. “But Architectural Footbridges are different; they are there to be looked at.” 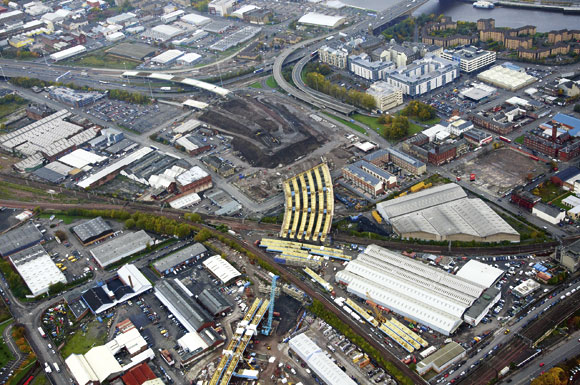 Steel is featuring on the biggest road project under way in the UK, the M74 extension in Glasgow, and is strongly favoured to be used on the £2,000 million Forth Replacement Crossing, both projects that the conference heard presentations on.

David Kite of Arup described what is to be a cable stayed, triple mono-tower structure over the Forth which will stand alongside the existing steel Forth railbridge and road bridges. The project is now at tender and is due to open to traffic in 2016. There will be two 650m main spans with approach spans up to 90m. The decks will be of closed box design to give safe inspection and maintenance, long term durability and large flat areas for repainting.

Major features of the design are fixed but tenderers have the final say in materials which could mean a steel orthotropic box, a steel-concrete composite box, a push launched composite twin box or a balanced cantilever prestressed twin box. Whatever the detail of the tenders which are due to be submitted at the end of this year Mr Kite said:” There will be a lot of steel in all of them.”

Cleveland Bridge’s Jim O’Neil described the progress of the M74 Completion which is transforming transport in and around Glasgow. There is some 21,180t of steel in the project’s four major bridges which are either assembled or are being assembled on site. The biggest structure is the 12 span, 750m long Port Eglinton Viaduct in the south side of the City using 16,039t of steel.

Design development undertaken by the project team resulted in a number of beneficial changes including a reduction in weld sizes, revised internal frame corner joints, curved flanges in plan by pressing, reorganised internal bracing, repositioning of transverse seams and optimisation of work between fabricating facility and site.