This temple of engineering excellence is the result of a clear synergy between a strong client and an equally strong architect.

Situated in leafy Surrey and surrounded by the calming influence of a large lake and 100,000 newly planted trees, the McLaren Technology Centre is the new headquarters for the majority of the Group’s staff.

The Centre boasts design studios, laboratories, research and testing facilities, electronics development, machine shops, and prototyping and production areas for the company’s Formula One cars and the Mercedes-Benz SLR McLaren.

Meanwhile, a visitor centre is located in a separate building at the entrance to the complex. It houses educational facilities, a temporary exhibition space and theatre and is linked to the main Centre by a subterranean building.

Initially, the Centre posed the challenge of sensitively accommodating a building as large as Stansted Airport on a 50-hectare green belt site. The required 60,000m² of accommodation had to be contained within a 20,000m² footprint and a 10m height limitation. This resulted in a deep-plan building sunk into the landscape, shielded from view by trees. 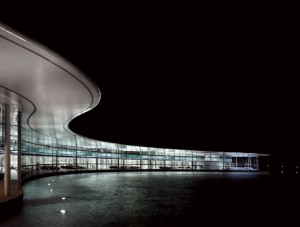 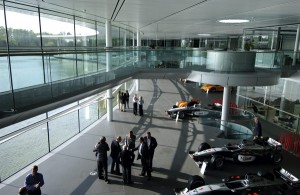 An organic design was decided upon which was further shaped by the fact that McLaren International (the Racing division) required more space than the other businesses. The best way to resolve this was to ‘push’ the glass clad facade forward at that point in the curve, and so create a ‘ying and yang’ S shape interlocking with the lake in front of the building.

Julie Wood, Arup’s Project Director who had been involved with the project from inception through to completion, says steel was the obvious choice as there was a strong desire to express the structure with an exposed engineering style reflecting the client’s industry.

“Steelwork was also the most practical solution as it allowed prefabrication off-site, which meant the long spans could be provided cost effectively,” she adds.

The main steel elements of the building include all the superstructure columns, beams at first floor and at roof level, while features such as an external curved walkway overlooking the lake and a 7m cantilever at roof level are also made from steel.

“The brief was to provide a building with a degree of flexibility that would be good value,” says Ms Wood. “Pre-formed holes where provided through the structure at regular intervals to allow for services integration and to give future flexibility,” she adds.

One of the most interesting aspects of the project was the fact that Arup designed and produced all the connections before a steelwork contractor even came on-board. “This was done to assist with the programme and allowed architectural and services requirements to be incorporated at an optimum time,” Ms Wood explains.

A further benefit of this was that the post contract programme had a reduced design and checking time. Standardised beam sizes and sections were specified giving benefits at both the design and construction phases. As all the design information was available from contract award, the steelwork fabricator was able to erect works sequentially from one end of the site to the other.

The judges say they were almost stunned into silence by the calm environment and the quality of the construction, which approaches in relative terms, that of a F.1 racing car.

To conclude the judges say, in some ways this is a disturbing building for human occupation, but it fascinates the intellect and is destined to become a timeless classic.