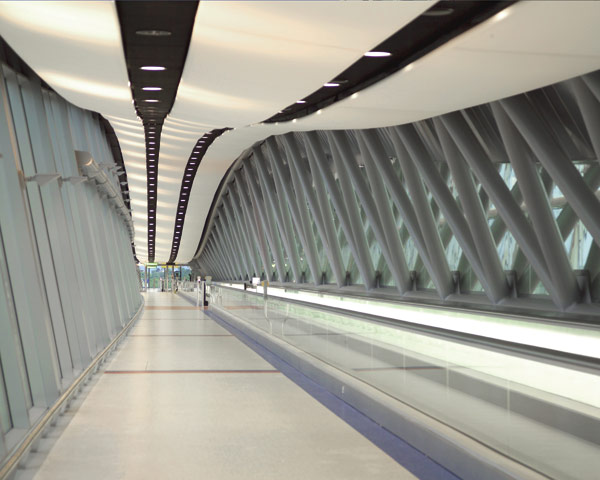 This landmark structure at one of the world’s busiest airports provides a unique experience for passengers as they pass above taxiing aircraft.

Constructing a bridge across a busy airport taxiway is a unique process, so much so that Gatwick’s new air bridge is one of only two such structures in the world.

This fully enclosed bridge has a span of 198m, incorporating more than 2,700t of steel, and provides a permanent link for pedestrians between Gatwick Airport’s North Terminal and a new satellite building known as Pier 6.

One of the main challenges of the project was to ensure that these components would fit perfectly together when brought into their final position, so as to minimise disruption to the airport’s busy Lima taxiway.

This was achieved by constructing the entire bridge 1.5km away from its final position in a yard on the airport’s boundary. The yard was specially equipped with all necessary infrastructure and here the bridge was completely fitted out with floors, glazing and cladding.

The complete structure, weighing some 2,500t, was then moved into position in a limited 10 day closure period using several multi-wheeled hi-spec transporters. Once the bridge was positioned directly below its final position it was jacked up 22m into place using eight 400t capacity centre-hole strand jacks. 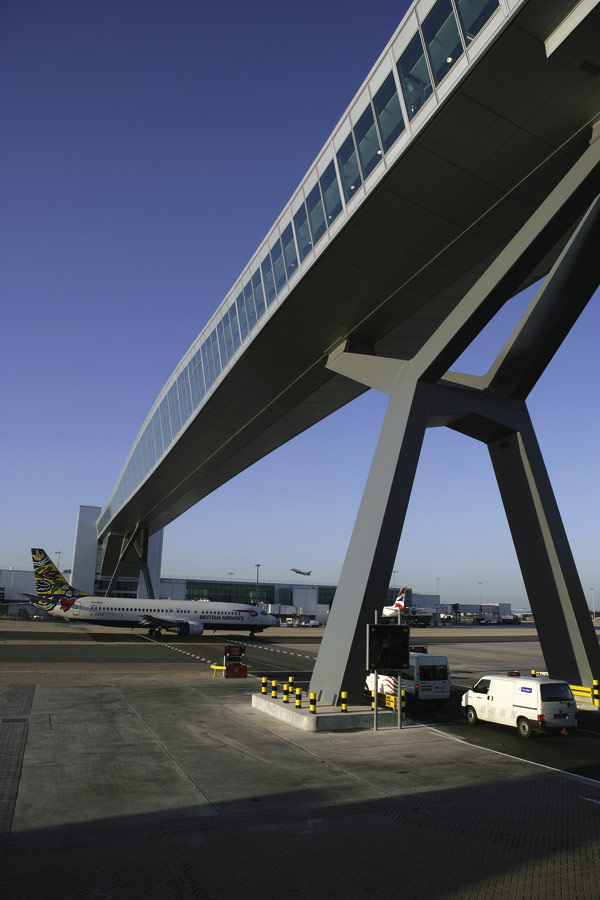 Duncan Watt, Watson Steel’s Assistant Project Manager says the logistics of moving the bridge was the most challenging and ultimately the most gratifying aspect of the project. “Moving, lifting and erecting the bridge in the closure window was a complete success,” he says. “Ordinarily on a job like this we’d do a trial erection, but that wasn’t feasible, so the trial erection became the real erection.”

Stephanos Samaras, Arup’s Project Leader agrees and comments: “Pre-fabricating a structure of this size off-site, then moving it into position and erecting with such accuracy was an incredible feat to say the least.”

“It was the first time this procedure had ever been carried out in the UK, on this scale, and we successfully secured the bridge within tight time-scales,” Mr Samaras adds.

The entire structure consists of a triangular shaped fabricated spine girder out of 25mm and 50mm plate that acts as the bottom boom of a 8m deep lattice girder. The top booms are formed from twin 560mm diameter tubular sections with CHS internals.

The main span is 128m, which allows for a future widening of the taxiway, while the minimum vertical clearance is 22m, accommodating the required clearance of a Boeing 747-400 tailfin.

According to structural engineers Arup, the bridge has been designed as a visual platform for passengers. Jacked high above the other airport buildings, it gives spectacular views of the entire airport.

Mr Samaras, says Arup utilised its multidisciplinary knowledge to save time on the structural solutions and made use of a 3D element space frame programme from its in-house software group, Oasys, to identify the best structural solution.

“The result is an elegantly curved upper section that gives the structural depth needed to make a bridge of this span stand up. Glazed from floor to roof, it achieves the transparency required to make it an exciting and unique visual experience and a major landmark for Gatwick Airport,” Mr Samaras says.

On 27 May 2004, exactly 10 days after it closed for the bridge erection, Gatwick’s Lima taxiway reopened, and airline staff and passengers alike witnessed the unique spectacle of aircraft moving beneath the new structure.

The judges say this is a tribute to the accuracy, ingenuity and skill of the design and delivery team. Much of the bridge success lies in the integration of architecture and engineering and the innovative methods of procurement, assembly and erection employed by the design and construction teams.

Roger Bayliss, British Airports Authority (BAA) Construction Director comments: “Not only have 3M passengers used the bridge since it opened in May 2005, but 50,000 less coach journeys a year are now needed at Gatwick, and that’s good news.”