Posted on September 1, 2004 by NSC in Commendation, SSDA Awards 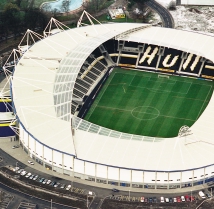 This continuity is enhanced by the adoption of an internal public concourse that runs the full perimeter of the stadium. Unusually, this concourse is at first floor level, thereby freeing up commercially valuable space at ground floor level.
Further, it is the first stadium to be built entirely within an existing public park. However, rather than destroying the park environment the stadium ‘respects’ the park, and will in fact introduce new visitors to it.

The West Stand roof is arguably the most interesting aspect of the stadium. Due to the significant overhang of the roof and the presence of the upper tier, the cantilever solution used for the other stands was not appropriate here. Consequently, a stayed rafter solution was adopted, using relatively slender 406mm diameter CHS stays to support box section rafters which are fabricated out of steel plate, and range from 1350mm deep at their supports, down to 600mm at the tip. 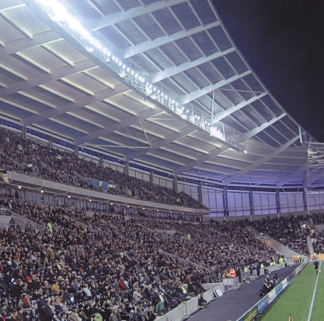 The CHS stays are up to 40m long, and rise gently in pairs up to the rear of the roof, where they meet six CHS section ‘A-frames’ which transfer the significant vertical and overturning forces down the stand, via terracing raker beams and diagonal bracing hidden within partition walls between hospitality boxes. To overcome potential problems associated with self-weight deflection and bending moments, the CHS stays were cranked at third points so that the deflected form approximated to a straight line. The main sections of the roof, the ‘A-frames’, were assembled and welded at the rear of the West Stand and lifted into place as complete frames using crawler cranes on the outside of the structure. This resulted in lifts of up to 110 tonnes. In order to minimise out-of-balance forces, the ‘A-frames’ were erected in a symmetric manner from the centre outwards. Hence, the two central ‘A-frames’ were erected first, and then joined together by erecting RHS infill purlins between them. This process was subsequently repeated for the two central and the two outer ‘A-frames’, after which the roof decking could be laid. The west side of the pitch is lit from a dedicated lighting gantry slung off the underside of the West Stand roof.

The total build cost of £27.5M equates to £1,100 per seat, which is not significantly higher than for a more conventional stadium.

The first ‘sod’ was dug in October 2001, whilst the first match was played only 14 months later in December 2002. Further, the production of construction information commenced just two months before the start on site date.

An asymmetric bowl form, possibly unique at this time, creates a spectacular roof for this 25,000 seat community stadium set in beautiful parkland. In meeting the brief this enables a combination of a single and double tier stand to be accommodated under one continuous building structure. A simple solution has been produced that is elegant in its design, rational in its engineering technology and economic in its means of implementation. The development gives the community a facility that is great value for money – Hull can be proud of this multi-purpose stadium.