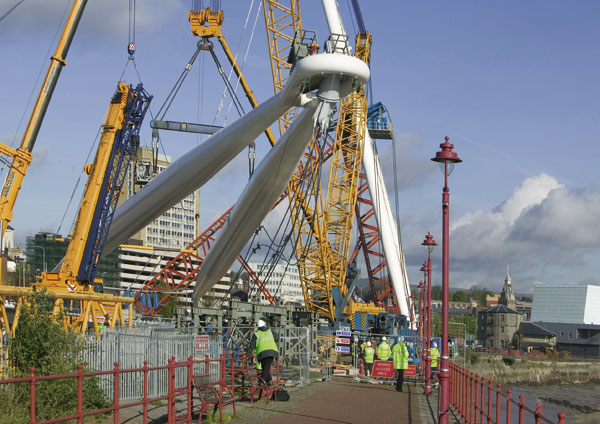 The footbridge over the River Usk at Newport is set to become a signature structure and will act as a catalyst to the city’s on-going regeneration.

It was built to improve pedestrian access to the town centre and plays a critical role in the city’s accessibility strategy, linking the east and west banks of the river.

The structure’s dramatic crane-like design also provides a symbolic link to the site’s earlier use as trading wharfs.

Lead designer and structural engineer Atkins, said placing the main bridge supports on the west bank reflected the pronounced change in the urban scale from the commercial heart of the city on the man-made west bank to the domestic uses on the east.

The concentration of major structures on the west bank was also beneficial to the erection process. The vast majority of temporary and permanent works were kept away from nearby dwellings on the east bank, while construction was simplified as there was no requirement for any works within the tidal riverbed. 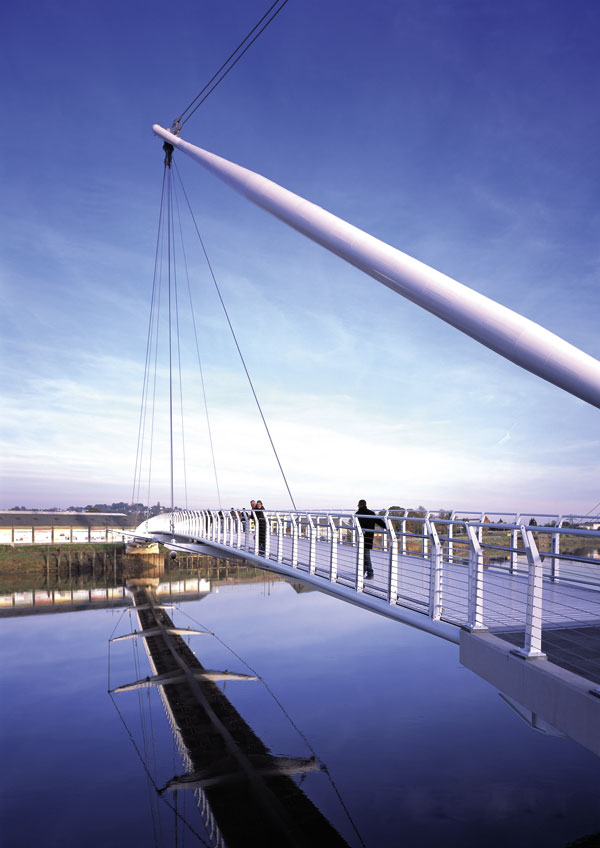 Ian Hoppe, Bridges Director at Rowecord Engineering, says an existing car park on the west bank provided an ideal site for assembly of the structure’s components. “The site was still very tight and all the steelwork was brought to site in 20m lengths and then assembled.”

The primary supporting structure consists of four masts, standing in pairs, which support the 145m-long deck from the west bank. The deck loads are transferred to ground level by two 120mm diameter cables which also act as stays for the masts. The forward mast is 80m-long and has a maximum diameter of 2m. The back mast is 70m-long, but because of the angles at which the masts are positioned, the back mast is the tallest part of the structure at 67m above ground level.

Rowecord began fabrication of the 850t structure in August 2005 and pre-assembly work started on site in January 2006. The company lifted and constructed the bridge in just over one week, predominantly using one 1,200t crane in conjunction with another 500t unit.

Work was essentially divided into two phases. The first involved raising the back mast, placing it on its trunion support, rotating it backwards onto a temporary prop and connecting the rear anchorage cables. The front mast was then lifted and installed at 15-degrees to the vertical.

Following attachment of the forestay cables, the front mast was lowered on the strand jacks to its final attitude at which point the forestay cables became taut and pulled the back mast forward, thus releasing the load from the temporary prop and strand jack system. The second phase consisted of the erection of the five deck sections and two pre-cast abutments.

“We erected four of the five deck elements from the west bank using the 1,200t crane to its maximum capacity and reach,” explains Mr Hoppe. “There wasn’t much access on the east bank and a temporary platform would have needed to be built to support such a large crane.”

In the end only one deck section needed to be lifted into place from the east bank, using the smaller 500t crane.

Summing up, the judges commented that the end result headlines steel in a big way, and provides a magnificent, iconic landmark in the heart of Newport’s regeneration area. 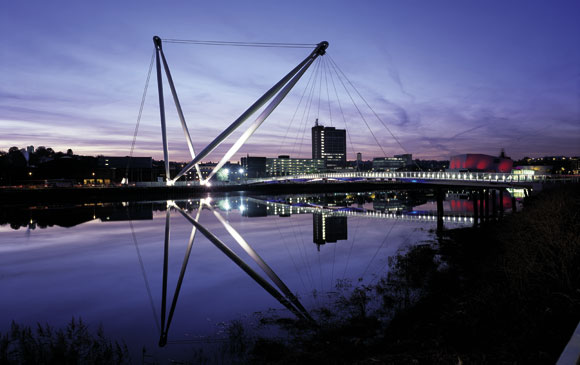