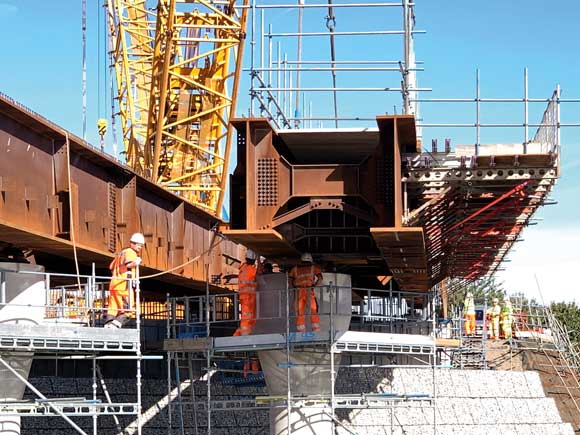 To erect the bridge, Severfield had to make 12 steel deliveries to site

Steelwork has been completed on the Springhead Bridge, which will form an integral part of the Ebbsfleet Garden City development

Located either side of Ebbsfleet International railway station, this new City is being constructed in an area that was previously a collection of chalk quarries.

According to Ebbsfleet Development Corporation (EDC), it will be recognised as a place to do business, capitalising on its role as a European high speed rail hub 17 minutes from Central London and two hours from Paris, as well as benefiting from its proximity to the Bluewater shopping mall and junctions with the M25 motorway and the A2.

It is envisaged that up to 30,000 people will live and work in this green, modern environment and the EDC hopes the delivery of well-designed and well-served neighbourhoods, workplaces, schools and town centres will ensure that residents enjoy a high quality of life.

One of these new neighbourhoods is Springhead Park and in order to facilitate easy access to and from the railway station a new steel bridge is under construction.

Springhead Bridge crosses a river and will enable people to walk to the railway station in around eight minutes, thereby helping to reduce residents’ reliance on cars.

Julia Gregory, Director of Projects with Ebbsfleet Development Corporation says the £16M bridge project had been a real feat of precision engineering.

“Not only does this bridge cross a river but it is also next to the High-Speed railway line so you can imagine the engineering precision and skill that went into every stage of planning. Engineers had to work within only a few millimetres to ensure the steel beams fitted correctly, with no over-slewing of the rail assets.

The bridge will allow easier access to the railway station 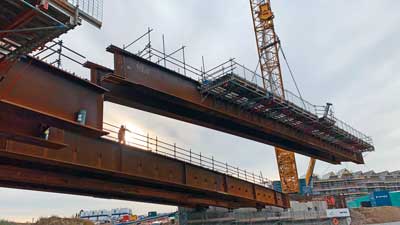 The bridge’s final pair of girder is lifted into place 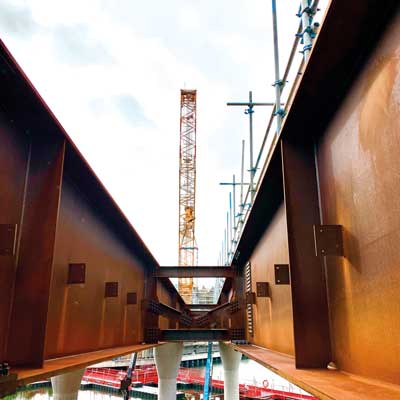 The bridge is a two-span weathering steel structure

“When it is open, the bridge will be multi-purpose as it will provide an easy route on a dedicated walking lane for residents, a cycle track and access for all vehicles including a new Fastrack bus route.”

The bridge is founded on continuous flight auger (CFA) piles, which is a technique used to create a deep concrete foundation. There are 70 piles in total and they are 29m-long and 1,050mm in diameter.

Placed on top of the CFA piles are reinforced in-situ concrete foundations, which form the pile caps. The abutment walls are constructed on the pile caps at each end of the bridge which support the steel beams and superstructure.

Explaining the choice of steel for the bridge, Balfour Beatty Regional Director of Operations in the South of England, Nick Osborne says: “With works procured through Scape’s Civil Engineering and Infrastructure framework in 2018, we considered a variety of materials during the design stages of Springhead Bridge.

“In total, the bridge spans 87m with a 55-degree skew and a central pier to support the middle of the structure.

“Due to the span, coupled with restricted site access, steel beams were selected to enable the structure to be split into smaller lengths for transport to site by road. The team split the steel beams into four sections and then joined them together onsite. Splitting the beams offsite helps support our commitment to reducing the amount of work we undertake onsite by 25% by the year 2025.”

The bridge deck is a conventional multi-girder steel composite arrangement with longitudinal plate girders and a reinforced concrete deck slab, which spans transversely between the girders and cantilevers outside the outer girders. Composite action between the deck slab and girders is achieved by means of shear connectors welded on the top flanges of the steel girders.

Overall the bridge is a 14.5m-wide two-span weathering steel structure comprising three braced pairs of girders.
The steel girders are 1.8m-deep and were transported to site by steelwork contractor Severfield in paired elements with cross bracing attached.

In order to minimise working at height, most of the temporary formwork for the deck slab installation was fitted to the steelwork in Severfield’s factory prior to delivery.

Severfield Associate Project Director Andrew Hall says: “To install the bridge we had 12 major deliveries of paired girders to site, which meant six deliveries to each abutment.

“Two paired girders were spliced together in an assembly area to form one 47.5m-long paired section, which was then lifted into position using a 600t-capacity crawler crane.”

One side of the bridge was initially erected with three lifts. The crane was then dismantled and de-rigged, which allowed it to be moved to the opposite end of the bridge, so it could install the final three elements.

Work started on the bridge last May and it is scheduled to open later this Spring (2020).