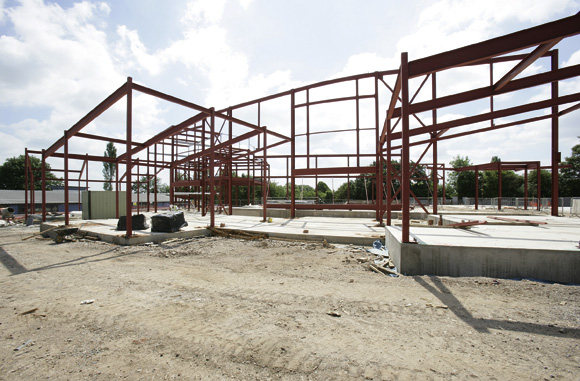 Explanatory CDs, bespoke hoardings and whole lot of care and attention are just some of the planning aspects required for the construction of a school and children’s home for young people with sight loss.

Two years in the planning and offering specialist education, therapies, healthcare and residential care, the Royal National Institute of Blind People’s (RNIB) new Rushton School and Children’s Home in Coventry will not only make a huge impact on the lives of its students and residents, but also a significant contribution to the local economy and community.

Rushton currently offers specialist education as well as residential care for young people between the ages of 11-19 who have a sight problem and additional complex needs. Because of a high demand for places, RNIB is expanding its service and once the project is open it will have 60 residential places available.

Situated on the site of the school’s existing premises, the new school and home will include 10 bungalows, each with six single bedrooms, a lounge, dining room and kitchen; an administration block, a large teaching block and a water therapy centre with a swimming pool and hydrotherapy pool. 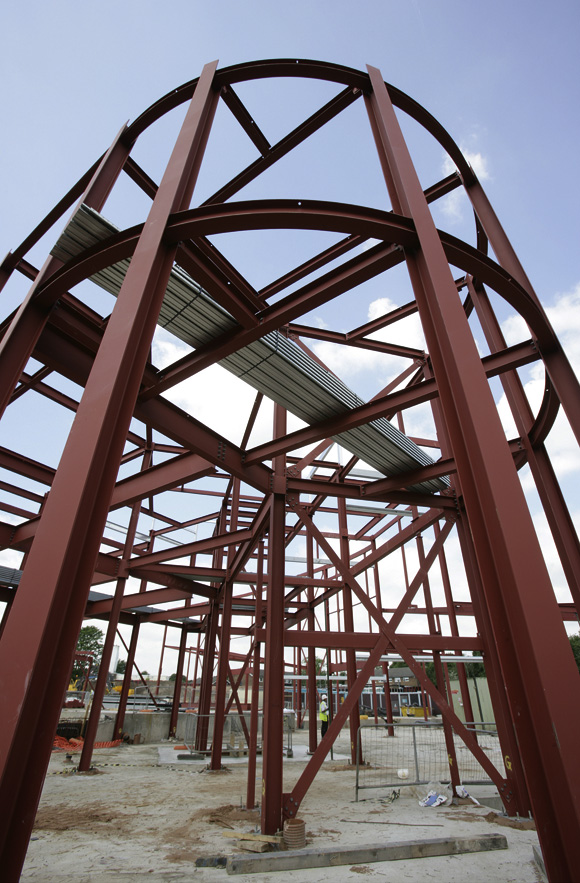 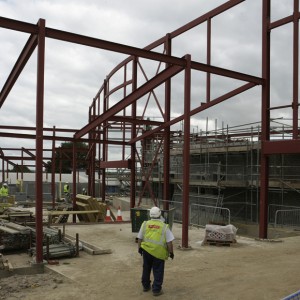 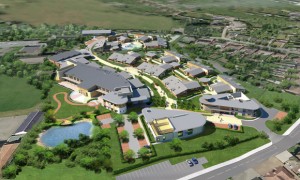 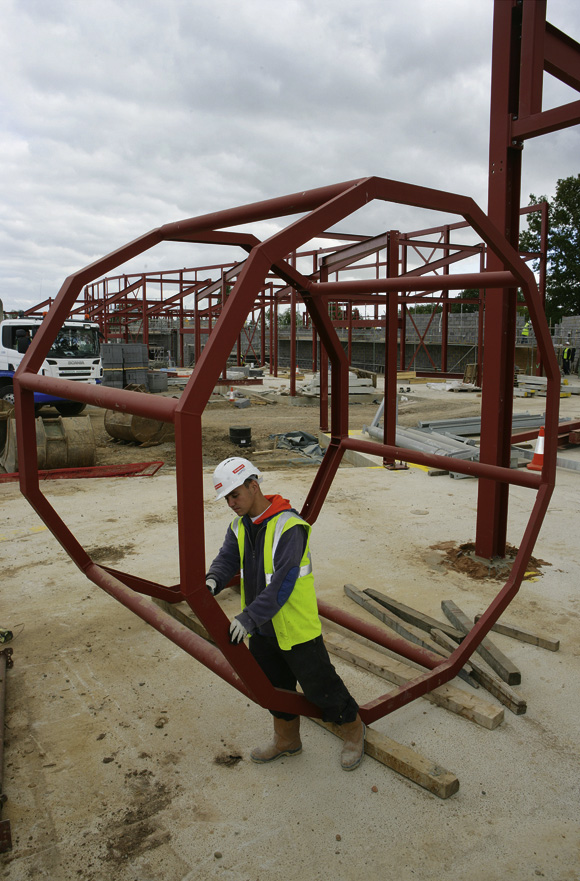 One of the project’s three roof lanterns is assembled

Building work kicked off with the demolition of some old school buildings, making room for the new build to begin. The remaining old school and residential buildings are spread out either side of the construction site and an access road currently splits the site in two, allowing pupils and teachers to safely negotiate between their two sites.

Constructing a school for children with diabilities ordinarily requires a lot of special planning, on this site it has been compounded by the fact that the existing school is situated right next door.

“Working next to and around a ‘live’ school is always a challenge, but here staff and pupils have an access route which runs straight through the middle of the site,” explains Steve Strachan, Stepherd Construction Project Manager.

Shepherd has erected bespoke hoardings which don’t allow any daylight to shine through from the site. As this could distress partially sighted pupils walking past, they have been placed either side of the access route. The hoardings are also free of any sharp corners allowing them to be used as a tactile route across the site.

Another example of the project’s team special planning involved the steelwork contractor The AA Group (TAAG). Prior to steel erection beginning TAAG gave the school an audio presentation of a typical steel project. This allowed the pupils and staff to get to know the sounds associated with steel erection machinery so they would not be surprised or startled when building work began.

The ongoing first phase of the construction programme will see half of the bungalows built along with the administration block and the main teaching block. Once this has been completed next Summer, the school will decamp into its new buildings allowing phase two to start. This will see the remainder of the old buildings demolished, the rest of the bungalows built and the water therapy centre erected.

The majority of the project’s steelwork can be found within the main school building. This is a hybrid structure, comprising a two storey steel framed administrative block with traditional load-bearing masonry selected for the main teaching areas. Large clear spans required within the roof structure have also necessitated the need to adopt steel rafters in this location.

The sixth form structure, at the eastern end of the main school building, is also constructed using steelwork to form a  ‘north light’ roof structure. A series of portal frames provide stability in a north to south direction with bracing, in addition to roof diaphragms, providing overall stability.

“We have selected steelwork in those areas where its additional strength and stiffness have given the design team freedom to provide the open spaces and natural light for this very specialized end user” says Richard Stokes, Engineering Manager for Shepherd  Construction.

Not only is the site bounded by existing school premises on three sides, it is also quite confined and this had made steel erection challenging. “The whole project team has had to sequence its work around other contractors because of the various materials,” comments Phil Moran, TAAG Project Manager. “The steelwork’s interfacing with masonry and other materials has meant we’ve had to programme our erection timetable.”

For the main frames in the teaching block TAAG erected the steelwork, temporarily propped it while the masonry was installed. TAAG  then returned to site to dismantle the temporary steel and erect the roof a few weeks later.

The teaching block’s confined position also meant TAAG has had to erect much of the steel from within the structure’s footprint, using lightweight machinery.  “We are erecting the steel over a number of visits and adapting to the different areas of the site,” sums up Mr Moran.

Also under construction as part of the first phase is the admin block. Secondary steelwork to the predominantly masonry two-storey structure has been erected. This includes RHS wind posts to add stability to slender walls, and a balcony on the first floor.

The second final phase of the construction work is scheduled for completion in early August 2011, when the RNIB will take over the entire remodelled site. There is currently 100 staff at the Rushton School and Children’s Home and this will grow to over 300 by 2011. Most will be in the care sector and there will also be new teachers and teaching assistants creating new jobs and opportunities for the local community.