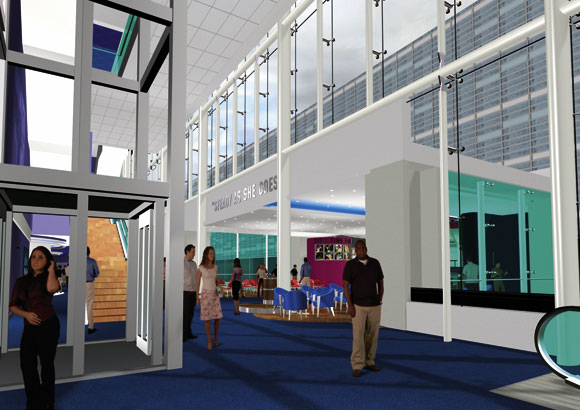 The use of concrete filled oval sections for the construction of a cinema’s facade not only allowed for an airy and light open area but also provided the client with the required two-hour fire rating.

The £900M Grosvenor Liverpool One retail-led regeneration scheme, rapidly transforming the city’s heart and skyline, is unique both in scale and approach. The development will create six distinct retail districts incorporating leisure and residential opportunities, each with its own character and all based on an existing street layout.

The main leisure anchor of the project is a 14-screen Odeon Cinema which comprises of a 25m-high three-storey steel-framed structure clad in copper and stainless steel, housing the two level cinema, which is constructed upon a terracota clad 13m-high retail base.

Jeremy Wedge, Principal Engineer for Waterman Structures, says one of main design criteria for this structure was to ensure a clear open space for the building’s two-level foyer. “This glass clad entrance hall contains lifts and escalators to the next level, otherwise it is a clear space of 10m in width,” he adds.

In order to achieve this design requirement, Mr Wedge, says the design for the foyer’s facade evolved gradually during consultations with the architects BDP and the steel contractor William Hare.

“We wanted the facade to let in natural light while the open plan design of the foyer needed minimal propping,” explains Mr Wedge. “Oval sections were finally chosen for their aesthetic appeal and importantly because they also saved on width.”

“Using round sections would have meant at least double the width and a more bulky look for the overall facade,” adds Mr Wedge. “And these columns also needed no propping on the major axis, which was another important architectural consideration.”

Richard Johnson, Construction Advisory Engineer for Corus Tubes, says this is the first time oval sections have been used in a composite design on a large structural project.

“Our oval sections have been available for two years, but the construction market is an area we are keen to develop,” says Mr Johnson.

Corus Tubes’ Celsius oval sections benefit from the same attributes as other members within the range. These include minimal residual stresses, excellent welding capability, good performance in compression, high load capacity and a reduced exposed area for painting.

Steve Whitfield, Manager, Technical Marketing at Corus Tubes continues: “In early 2005 we were asked about oval sections for this project, and as they’d never been used on such a scheme before we set about fire testing them.”

Corus Tubes in conjunction with intumescent paint producer Nullifire conducted a series of tests with unfilled and then concrete filled oval sections. Nullifire’s S605 paint was used to 2,500 microns on all tests.

Once Corus Tubes were satisfied with the test results and had documentation which proved the oval sections fire rating, the company, along with Waterman Structures advised steelwork contractor William Hare of the products suitability for the Liverpool project.

“The architect wanted to use oval sections for their sleekness and concrete filling the sections also means less intumescent paint is needed which also improves the columns appearance,” says Mr Wedge.

“Oval sections look great,” comments Steve Duffield, Marketing Manager for William Hare. “They really stand out on this project and give the foyer a different and lighter appearance.”

“Concrete filled ovals haven’t been used on a large project before, but there’s no reason why,” sums up Mr Whitfield. “This project, and the tests which we carried out, have shown  they are suitable for a range of construction projects.”

Ovals on display at Dublin Airport 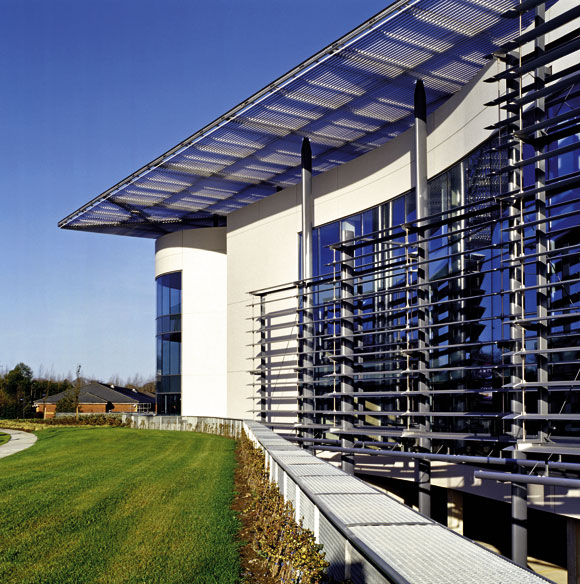 It is approximately 2,737m² in size and capable of vertical sub-division into three units. It has a fully modern specification, including raised access floors, suspended ceilings and lifts.

Corus Tubes’ Celsius oval sections were used to enhance the visual appeal of the development. 500mm x 250mm OHS’s were installed to support the louvered external solar shading to the atrium, while 300mm x 150mm ovals were used for the internal feature staircase.

Mr Whitfield, says ovals were the obvious choice for an exciting and elegant column solution to compliment the architects vision for a contemporary modern office development.

The steelwork contractor for the project was Duggan Steel, working with main contractor John Sisk & Son and architect RKD.

A degree of success for ovals 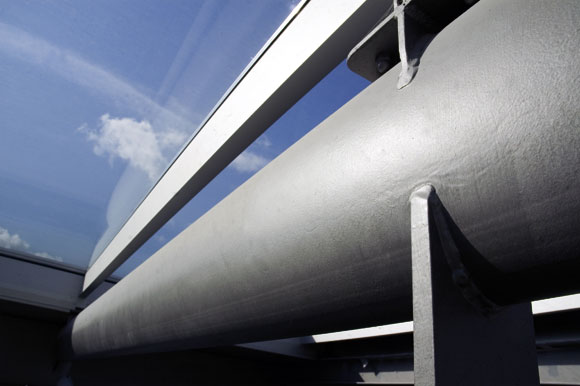 Main contractor Patton Construction has completed Phase 1 of a £30M redevelopment scheme at the University of Ulster Belfast Campus in the city’s Cathedral Quarter.

The 6,000m² steel framed six storey extension houses new lecture theatres, auditoriums, teaching rooms and display areas. The most eye-catching part of the scheme is an internal glazed atrium which extends through the building and features a curved auditorium, which meant that the roof also had to be curved

“CHS and oval sections were the choice for this prestigious project due to their superior aesthetic qualities and the ability to support a glazed cladding system, which further added to the overall attractiveness of the job,” comments Mr Whitfield.